I have very recently turned thirty-two and, to celebrate the occasion (albeit, eight-days later), I decided that I would lead a walk for a group people…

In spite of my struggles with social anxiety, a lack of social skills and other issues, I felt like doing ‘something different’ and wanted to share a walk in one of my favourite areas. I stopped doing things to keep up with other people (like drinking) nearly ten-years ago and I dislike loud parties and crowds. 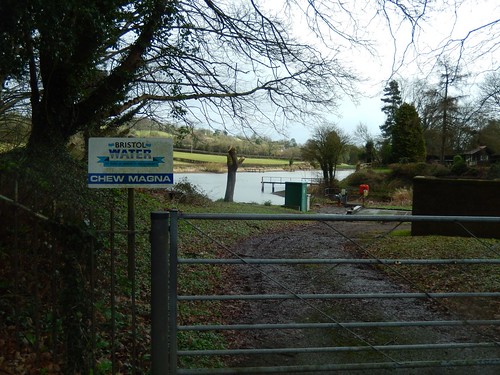 That walk took place yesterday and I was amazed to have ten people walking with me. Weather was also very much on our side! Back in early March, I set out one Sunday morning on a bit of a ‘reccy’ for a few hours, to investigate a series of different footpaths.

I started from the concealed village car park behind a pub off the B3130, which is entirely free to use. It was almost half-full when I arrived – I imagine it’s used by residents, pub-goers and café-shoppers alike. Not forgetting the nearby medical practice… Starting a group walk from here probably wouldn’t have been the best of ideas.

I would go on to start my Post-Birthday Walk at Chew Valley Lake – it costs £2 to park all day but there’s a café serving all-sorts on site. 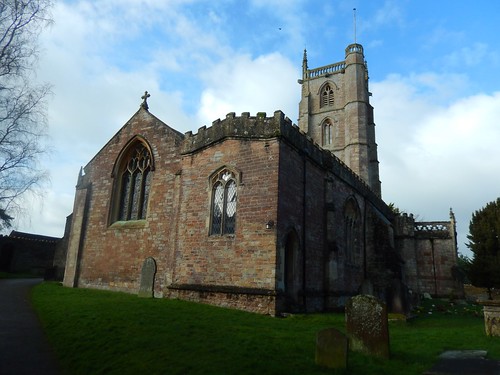 Back in Chew Magna, I headed immediately for the rear of the church where a second village pub can be found lurking near by. I’d also presume it’s generally less-busy than the one on the main road. 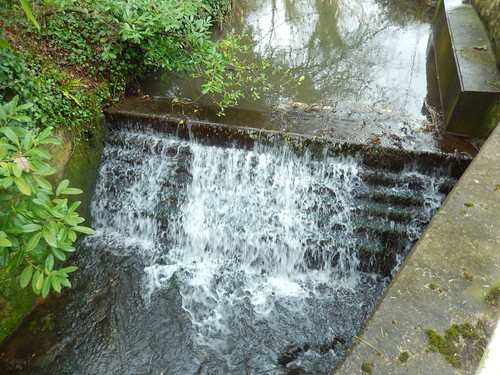 Walking west now, I would follow a riverside path just south of The Rookery. There was a stone squeezer stile providing access from the road – I haven’t photographed and probably because I was fixated on the sound of falling water. 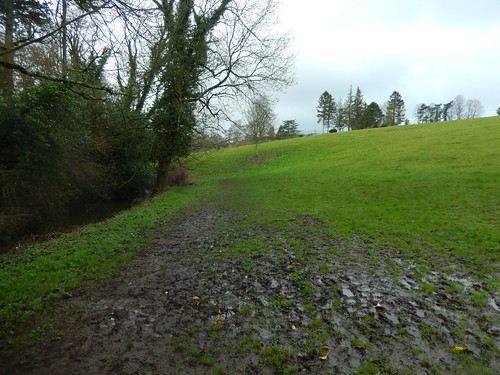 It was a slippery stretch on this grey day in March. Yesterday, however, the conditions were near-perfect for us to stop on this hillside for lunch. 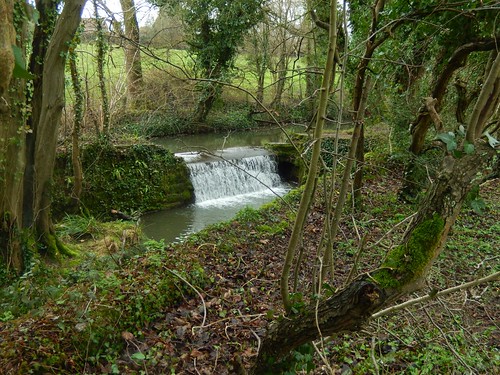 Another weir lay in wait before I would reach the next road. 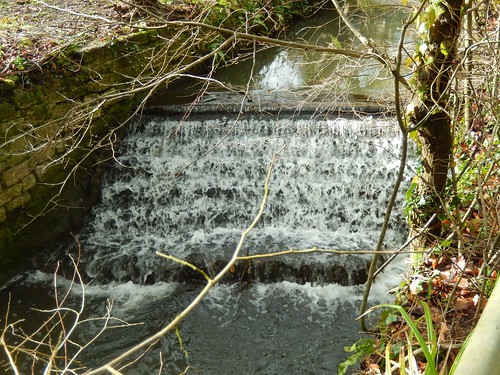 I’ve never actually looked in to the purpose of a weir. I’d presume it’s something to do with reducing or regulating the flow of water… Not that it really matters to me. 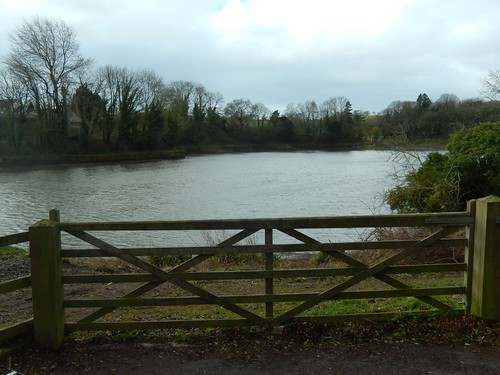 I had my sights set on reaching what must be the lesser-known of the nearby reservoirs, with Chew Valley Lake being the No.1. I quickly realised it was private, as expected and that access was only permitted to members of Knowle Angling Association… Knowle, being a suburb of south Bristol, some seven or eight miles to the north. 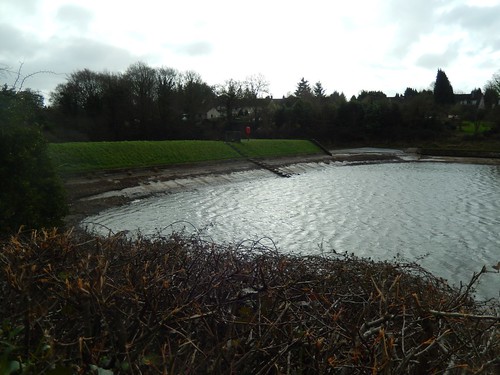 So, I decided to cut this bit from Saturday’s walk and instead, we would head for Chillyhill House Farm. 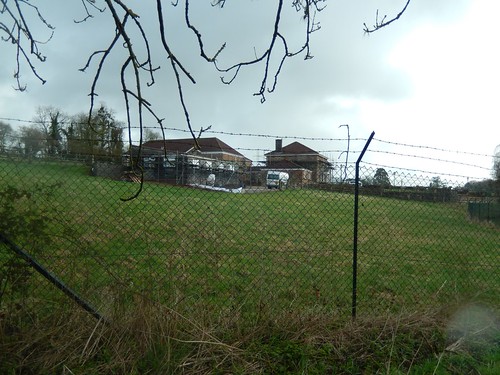 A high security fence deters the right of way clear of a nearby property. Very out of keeping with the rest of Chew Magna – at least, as much as I have seen. 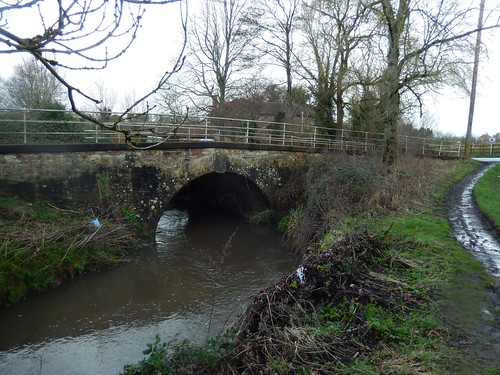 To continue on from here, I had to follow a road bridge over the water before taking an eastward path to the south of the less-attractive reservoir. If you like old bridges, Chew Magna is a good place to explore, with its many river crossings. 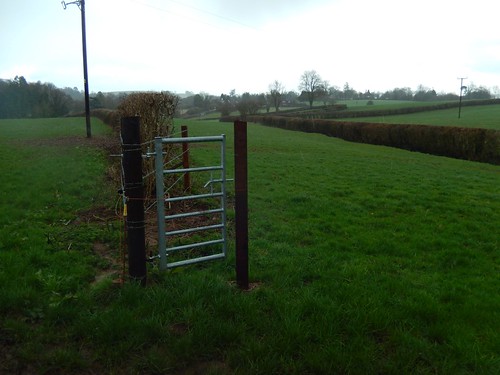 Crossing over the B3130, I began climbing a field opposite, with the hedge on my right. It had also begun to rain and I could immediately feel water seeping through my “showerproof” Regatta trousers. There was also this rather redundant gate, which is one of the narrowest I have come across. 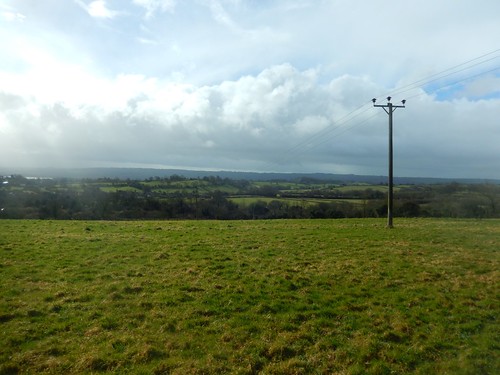 My exploration took me to the top of Pagans Hill, before following an almost-level route towards North Hill Farm in Chew Stoke. We’d also follow a similar route during the main event. 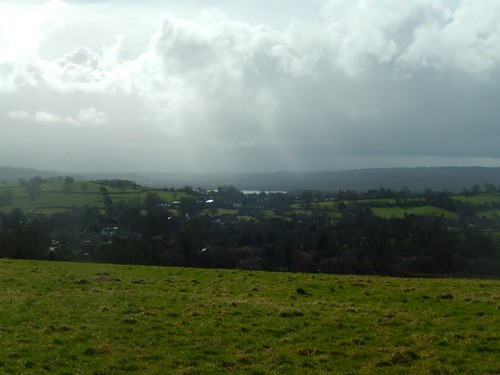 You can just see Chew Valley Lake and, on a sunny day, the light reflecting off the many parked cars may be blinding.

It was at North Hill Farm, back in November, where I came face-to-face with the landowners while absently walking along the private driveway… At least now, I knew of the correct route to follow. But, yesterday, we’d already begun turning downhill before reaching the farm. 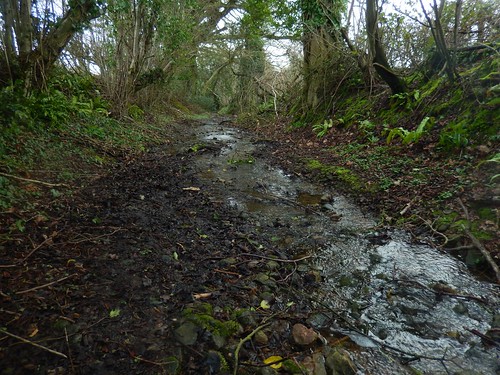 I didn’t fancy following a dog walker on what looked to be a wet descent of the final field before reaching the road. So, from Whitling Street and, close to Nempnett Thrubwell, I followed a bridleway that would allow me to join the Two Rivers Way at its end.

It was still quite wet but there was no great quantity of mud and I was able to remain on my feet. 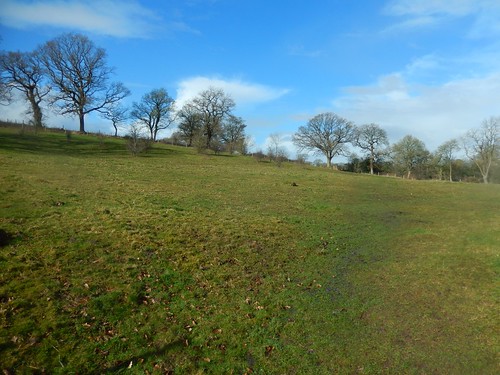 Suddenly, the sky had turned blue. All fears of further rain had vanished, as I found myself walking in the real Chew Valley, once again. 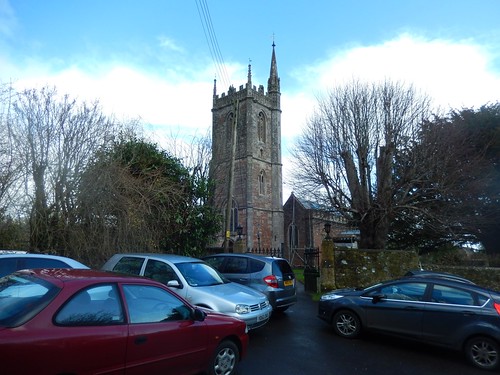 Heading east now, I passed the church of Chew Stoke on what was most definitely a Sunday morning. 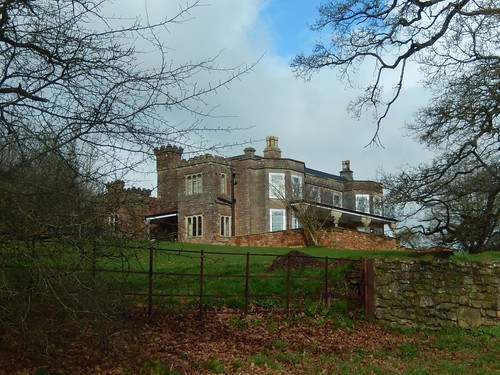 There were now a couple of options available to me, with a return to Chew Magna in mind. I would take the most direct route back, in order to minimalise any road walking.

Passing the school grounds, I would also see a property listed as Chota Castle, which looks to be a private residence. 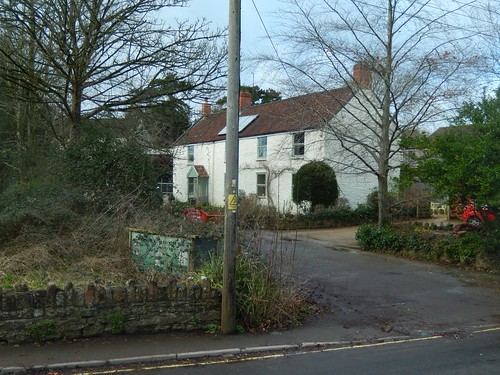 Back in Chew Magna now, I’d follow the road over Tun Bridge with an old mill over to my left. A sign now buried within the brambles welcomes you to Tunbridge Mill. Did they use to house visitors, here? I wonder when it last opened its doors?

A red skip out the front suggests the council may be ready to approve a proposal to knock the building down and build more bloody housing in its place. 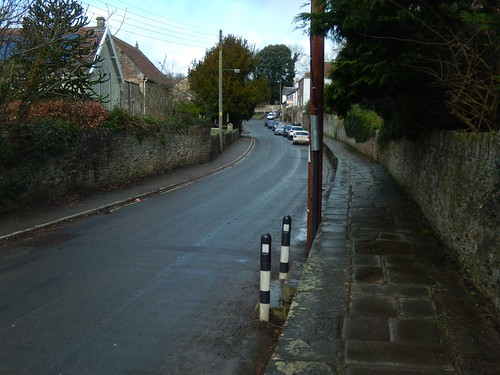 My earliest memories of passing through Chew Magna involve witnessing the high-rise pavements that still exist throughout the village today. While flooding is a continual risk to the area, I can only imagine these were of greater significance in days before the large reservoir/lake was completed.