Sugar Loaf. A mountain or hill? However you may regard it, this was one of the peaks of the Brecon Beacons that I’d been intending to conquer for a good couple of years. 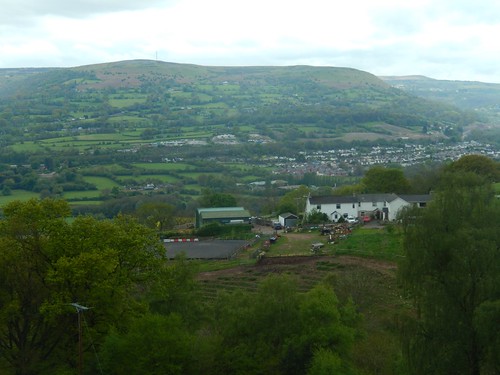 I came across an eleven-mile route on the Walking Englishman’s website some time ago and that provided the impetus to get me going. There are so many ‘short’ walks available online… I always prefer to do something worthwhile, when bridge tolls and ninety-minute drives are required. 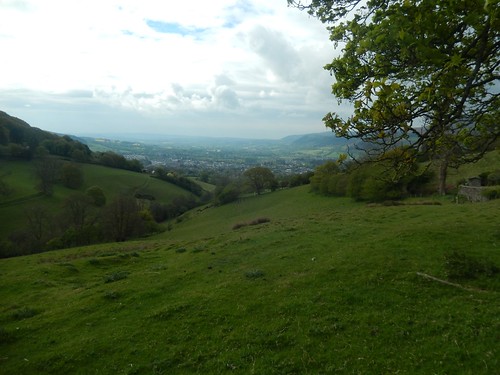 My destination was the free car park/lay by at SO 288 166 and very close to Porth-y-Parc; a few miles south-east of the Sugar Loaf summit and the best part of 400m beneath the known trig point. I couldn’t even see the “mountain” from this point but the immediate views south over the vale were stunning. I think I was also the first vehicle to arrive; shortly followed by a steady stream of others, set to go off and do their own thing. 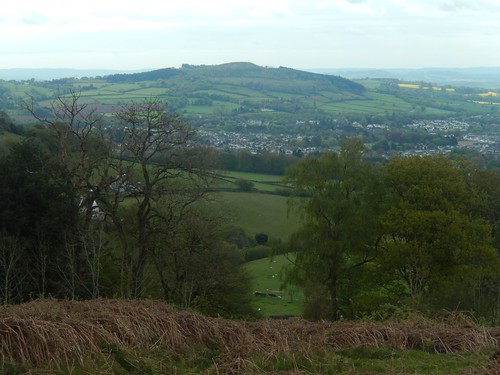 I crossed a couple of fields to High Beeches, then gently uphill along a track before descending across Open Access Land without waymarking, in the vague direction of an unmarked metal gate.

This led me down to a quiet road and Home Farm (which is easier to type than Tyrewen), where I passed a small group of hikers heading in the other direction. 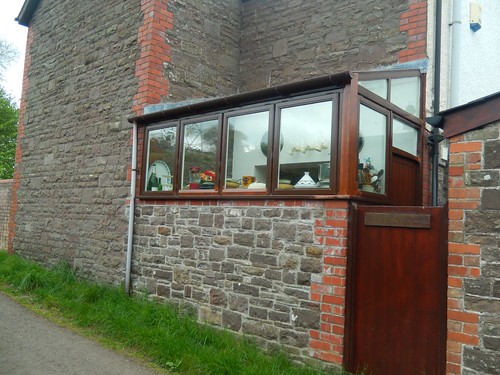 It looks as though I could’ve taken a more direct route down passed the local vineyard, where the road I’d chosen to follow leads you along roads and soon passing the home of The Abergavenny Baker. With the way here kitchen appeared to be set out, I wondered whether she bakes ‘on demand’ and serves directly from the window. 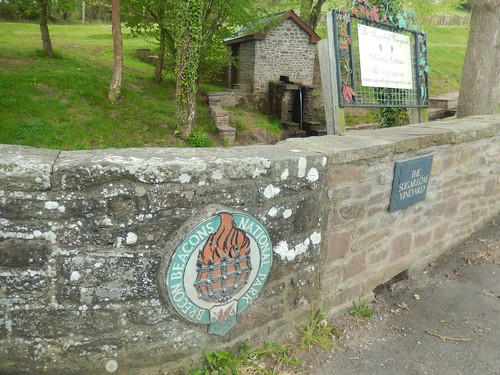 At the time, I couldn’t remember whether Sugar Loaf was part of the Black Mountains or whether it was within the Brecon Beacons National Park. 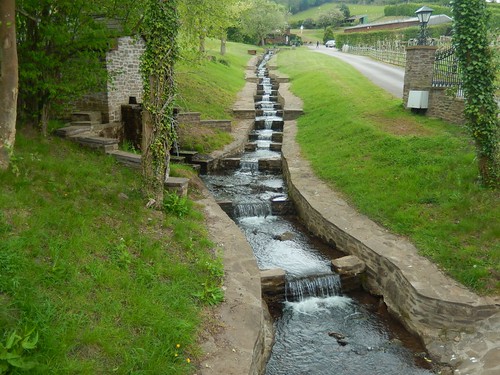 Not only was the Sugar Loaf Vineyard informative, it had a very attractive stream of water running down the hillside. 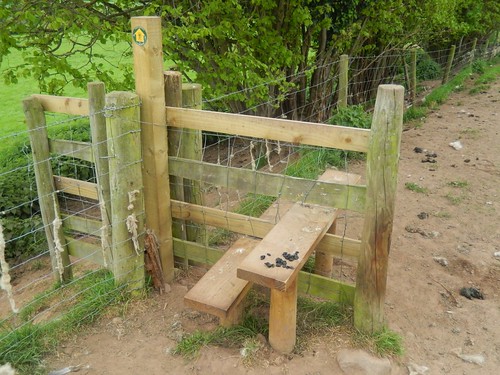 Up the road briefly and then west across fields, I found my first ever experience of a sheep having defecated on the tread of a stile… Only in Wales, perhaps!

Fortunately, I could walk around. 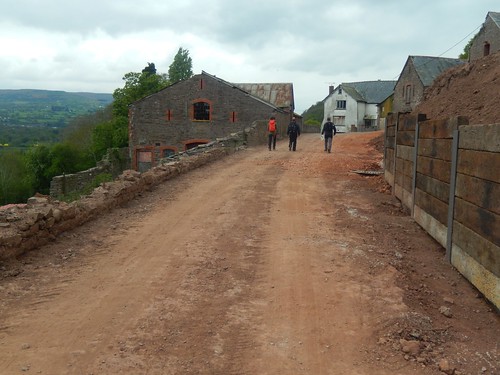 At Tyrewen Farm, I caught up with a trio of walkers who’d so far kept ahead of me and appeared to hesitate over the way forward. With the word ‘FOOTPATH’ and an arrow painted on one wall, I led the way, following this gradual but persistent ascent.

This wouldn’t be the last time we’d see each other… Keep that in mind as you read on! 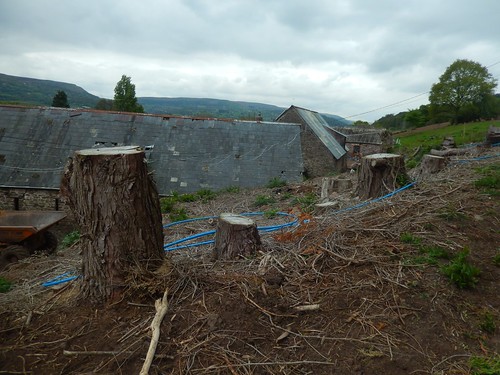 I wonder whether the ‘rewen’ in Tyrewen actually means ruin, as many of the buildings here were in an imperfect state and there didn’t appear to be much activity going, even if this was a Saturday. 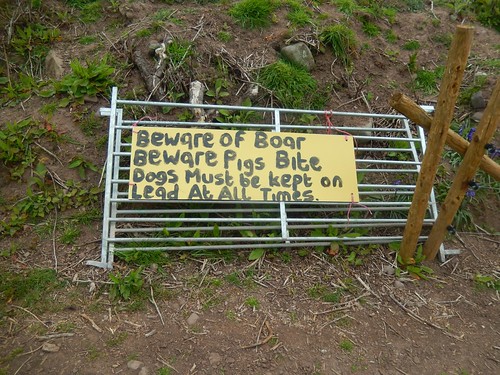 Thankfully, I did not see any boar. Or whatever beast had removed this gate. Looking now, the over-capitalisation of certain words is the most terrifying feature. 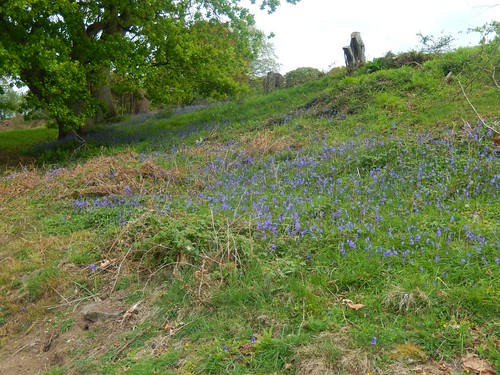 A brief flurry of bluebells on the right. How quickly, they now seem to have come and gone. 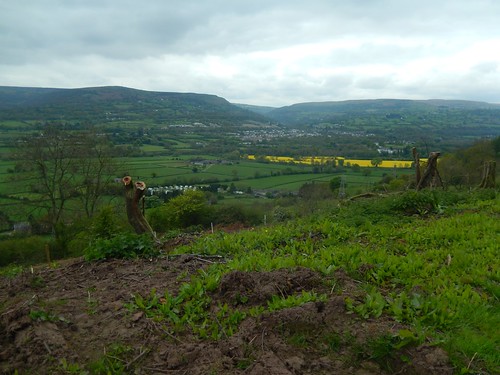 At the end of this climb, I reached another quiet road [with a busy red Royal Mail van, Ruth!] where I felt a need to remove one layer and take advantage of the available bench. 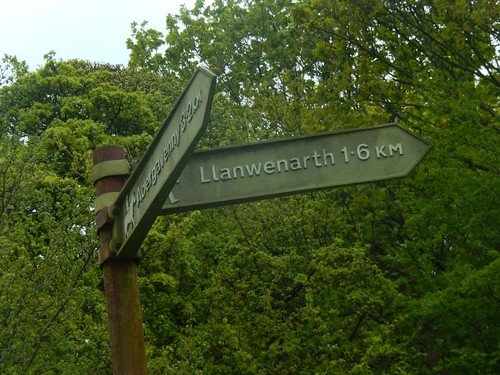 Within ten minutes of rest and refuelling, The Trio had overtaken me. Up above, the weather threatened to turn while I was keen to keep my coat off in preparation for any further ascent ahead. 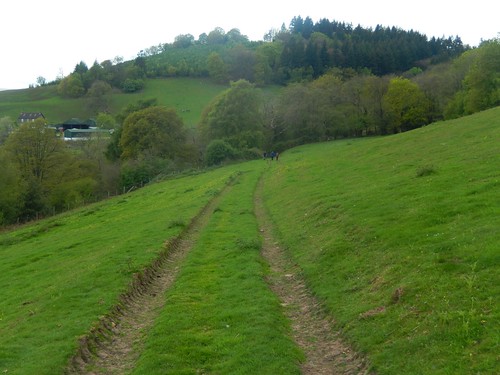 I set off from Llanwenarth Breast heading west once more, in the direction of Pine Grove and soon to meet up with The Trio, who were again hesitant as we arrived at a point where you cross a spring to arrive at an unmarked (but unlocked) metal field gate.

They were adamant it was ‘uphill and left’, as they attempted to climb a wooden fence with no clear right of passage. At the same time, a Welsh woman from Pine Grove house had spotted us and I led the group in that direction, feeling more confident that we would be following the right of way towards Graig (and the landowner confirmed this).

See, it doesn’t always pay to simply follow the person or people in front of you! 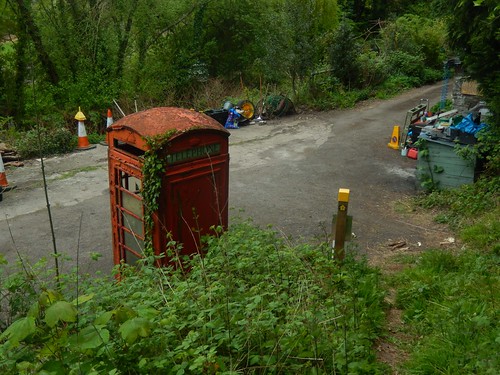 I sped off once more, as we followed an easy-to-follow but still unmarked path between fences and soon descending to emerge at a quiet road along the southern edge of the woods. Sadly, the redundant telephone box was being used to store large plastic bags and builder’s waste. 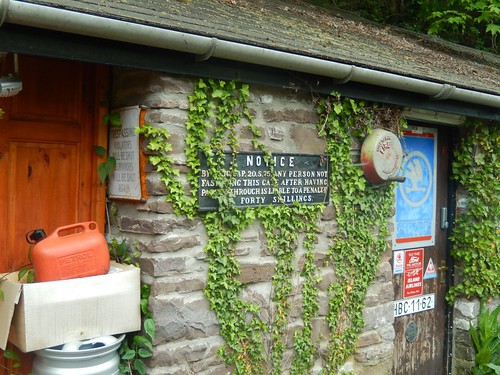 One building was adorned with signs that implied it was once a railway station… But there was no evidence of any track bed nearby – at least, as far as I could see. I’m used to seeing raised earthworks in similar areas. I can only guess this was at SO 259 161, or slightly further west.

It’s possibly within Llanwenarth but I cannot find any information relating to it online. 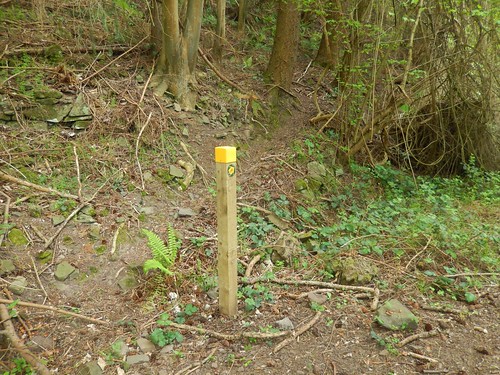 Waymarking was quite good, following the broad path along the floor of these woods. 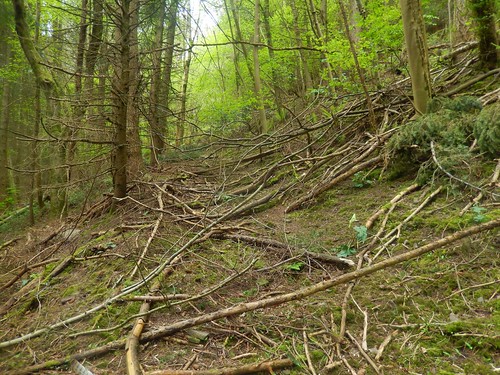 Still, I made a big mistake by misjudging an intended right turn that I felt I had reached ‘too soon’ to be the one illustrated on my map… I ended up crunching along falling branches, clambering over felled trees and following what was possibly a deer track…

By the time I’d returned to correct my error, I’d probably lost twenty-minutes and The Trio were back, already beginning their zig-zagging ascent along the correct path (I don’t think it was waymarked). 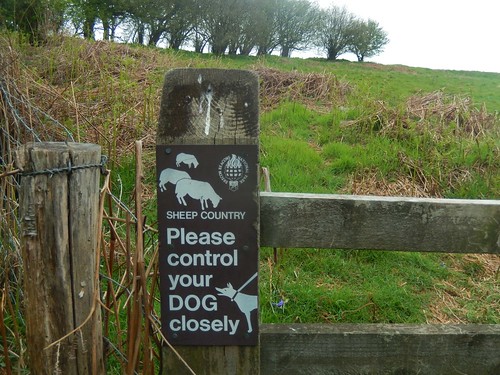 It was a tough climb to escape the woods, with the occasional fallen tree to overcome. At the top, was a reminder that we were walking within the ‘English’ portion of Wales… 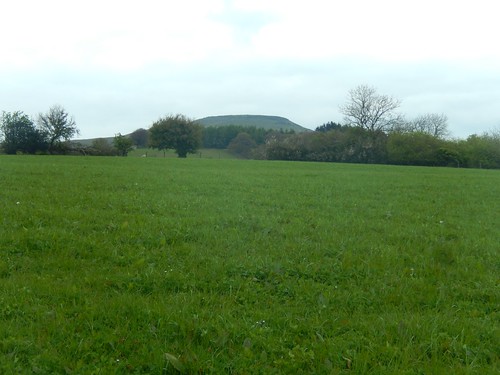 For the very first time on this day, I could see the flat-topped summit of Sugar Loaf. Getting closer but still, seemingly so far away. I parted from The Trio once more as they remained to catch their breath. 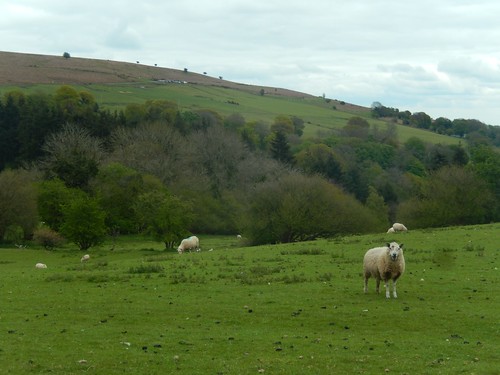 On a level approach to Pen-Y-Graig farm, I could see another Sugar Loaf car park higher up, which is marked with a viewpoint symbol on the OS map. This would be at SO 268 167 and, with less than 300m to climb to the summit, I’d regard it as one of the more “touristy” car parks available… It probably fills up very fast on a weekend. 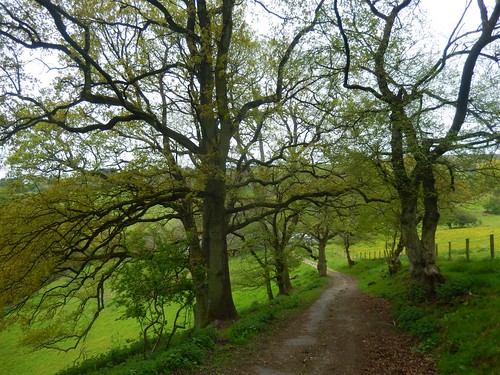 Away from the sheep, I continued my walk towards Cym-cegyr. Another farm. But one where the field gate had been locked up. I had to hop over before finding an almost ironic sign advising horse riders on following the path ahead. 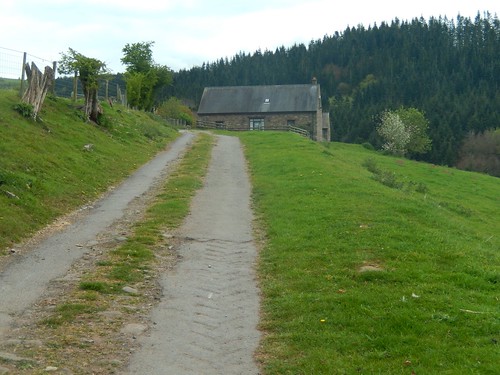 From Cwm-cegyr, I was supposed to descend, following the top edge of several fields through gates which were unlocked… But, without waymarking once more, I didn’t feel too confident in doing this alone and opted for the alternative of a farm drive (past a holiday cottage), which is also marked as a right of way on the map.

Waymarking does seem to be quite hit-and-miss in Wales. This is something I also observed more recently in Snowdonia. Honestly, I don’t think the issue is as bad in England. Ordnance Survey must be making a fortune in Cymru! 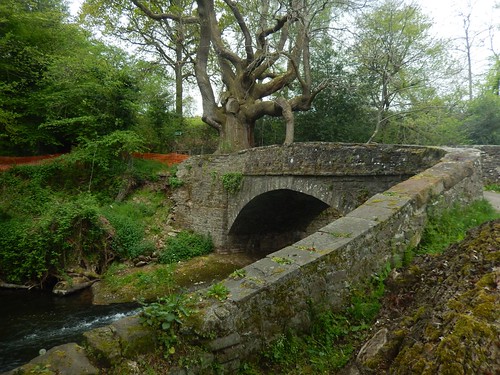 At the end of this latest descent, I made my way in to the hamlet of Llangenny. It was lunch time and I would soon find a place to rest ahead of the inevitable 500m climb to the Sugar Loaf’s summit!

If you have an online OS Maps account, you can view the route I’m walking:

Thanks for reading and look out for Part 2.