A ‘Joint Walk’ of mixed age and many boot in the Wye Valley. Beginning at Tintern, from May 2017.

Officially, I’m a member of a 20s and 30s walking group in Bristol. But we also have a ‘Plus’ group for members over the age of forty. 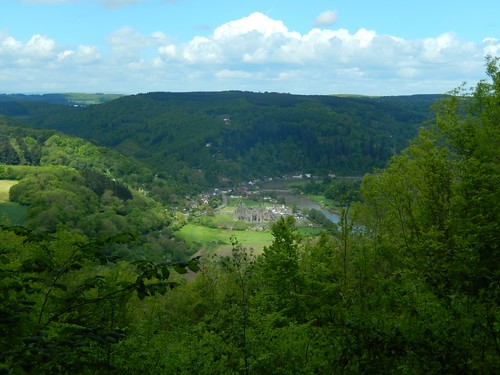 Every now and then, you’ll see a ‘Joint Walk’ appear on the calendar, where walkers of all ages are welcome. On this occasion, with a route starting in Tintern, we set off with, I think, thirty-six people in tow of the two walk leaders!

It was by far the biggest number I’d walked with for some time… Possibly stretching back two-years to the last occasion and another walk that incidentally began in the same place!

From a socially anxious point of view, I found this difficult and, to be honest, I enjoyed the overall experience less, with stomping boots and clacking sticks both ahead of and behind me. A stark contrast to walking alone or with a couple of friends. 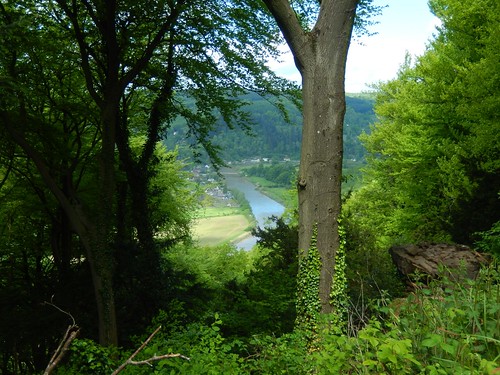 We all parked close to Tintern Abbey using the pay-and-display bays… I now remember, this was where the machine ate a succession of my 20p coins without registering them! But at least I could share the costs of parking (and the b*****d bridge toll) with my passengers. 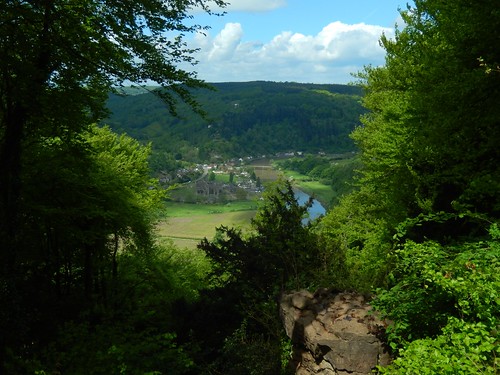 Our walk began with a climb. Steeply, gradually. We’d crossed the River Wye and were pressing up above Passage Grove to the Devil’s Pulpit – a popular viewpoint, overlooking Tintern and the ruins of its Abbey (which I’ve still not visited but only because you have to pay).

When even half of thirty-six people decide to stop and take a photo, it takes time. I think I did well to exclude everyone else’s head from my own images. 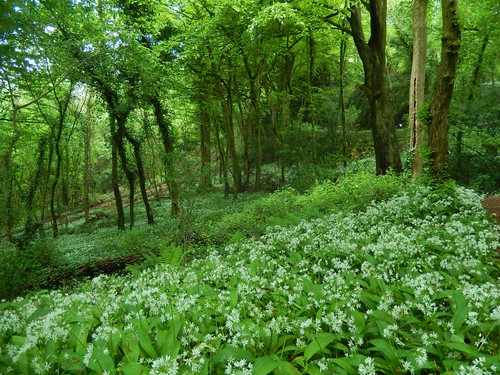 From the viewpoint, we were on Offa’s Dyke – one of many National Trails I hope to complete within my lifetime. 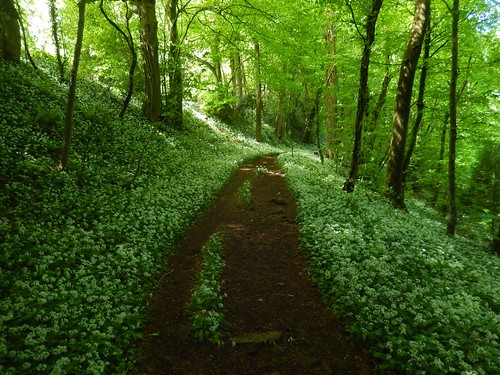 Walking northwards, we were surrounded by garlic. Such a beautiful place to be at this time of year, even without a single bluebell. There were several junctions to negotiate and, with the group becoming stretched, due to its size, I remember having to pause at each and every turn.

At one point, one or our leaders even backtracked to ensure the tail-end of this large group was following the right lines. 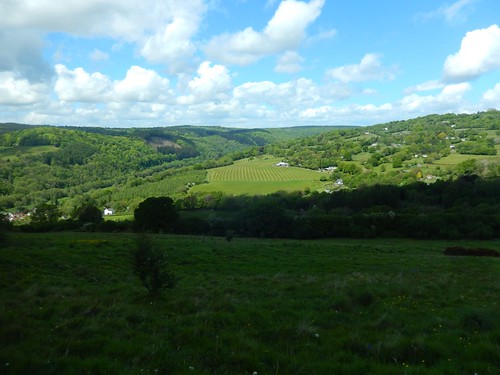 Eventually, we emerged from Caswell Wood and on to Madgett Hill, overlooking Brockweir. There was talk of stopping here for lunch and, as we all sat down beneath chilling clouds, out came the sun.

As we packed up after lunch and prepared to descend in to the valley, we were stopped by a Georgian Choir from Bristol, who kindly offered to sing for us. Some people took photos and videos to savour the occasion, while I left my camera alone. Thinking, as I more frequently try to, of Sean O’Connell in The Secret Life of Walter Mitty… He sees the snow leopard he’s been searching for but decides not to take that photo. 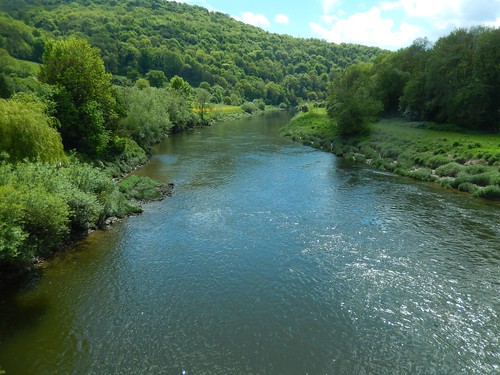 We crossed the River Wye once more, from Brockweir and began climbing another hillside. Possibly following the Wye Valley Walk towards Botany Bay. 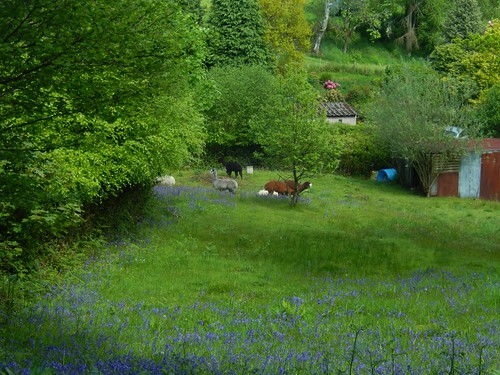 Somewhere beyond and following a road uphill, we did see bluebells, with alpacas for company. Again, I felt my anxieties around people rising up… Narrow roads, tough tarmac, hedges on either side and everyone marching in the same direction… I didn’t feel the usual sense of ‘freedom’ I often seek from walking. 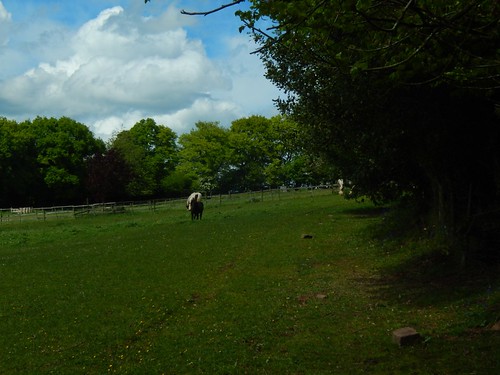 Emerging from the far side of another patch of woodland and these huge horses crept over, while we waited for others to take their toilet breaks. They may not look huge in my photo but, trust me, they were impressive close up! 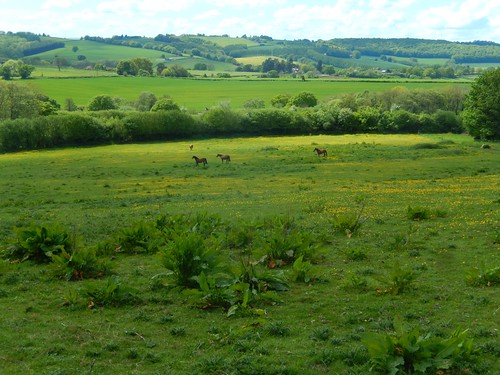 Heading down the hillside, we sawn a sheep being sheered (one of several ‘firsts’ to feature on this walk). We’d later pass pigs and see other animals that don’t often frequent the British countryside. 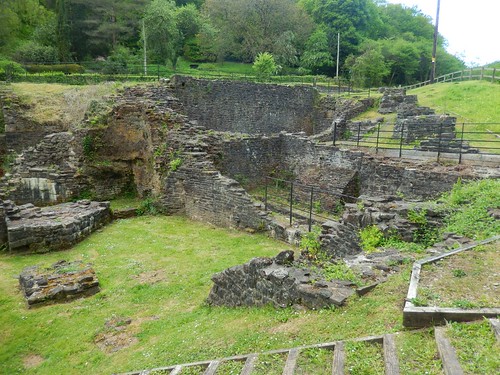 A short distance from the end of the walk, we passed by the remains of Tintern’s blast furnace and forge. 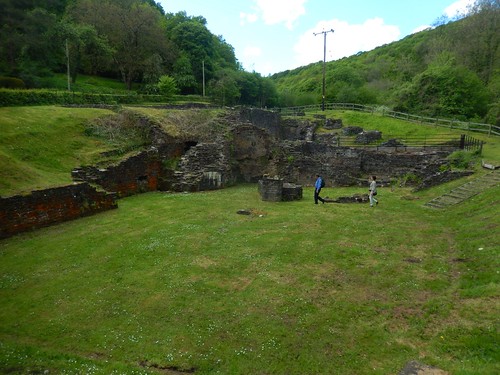 There’s not requirements to pay an entrance fee, if you want to get up close to these ruins. Abbey Tintern Furnace is regarded locally as the ‘birthplace of modern industry’. 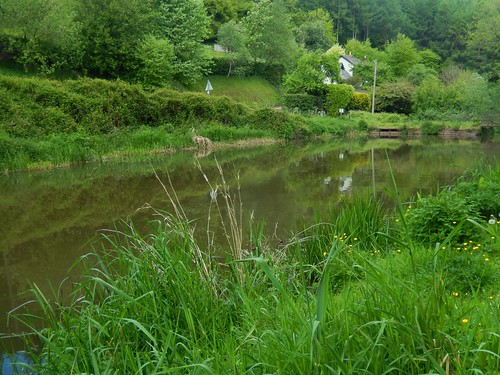 Before crossing the A466 to our cars and post-walk refreshment, I noticed a car park that didn’t appear to have a pay-and-display meter… Something to remember for future visits! Maybe I’ll even pay to explore the Abbey ruins.

In all fairness, if you do ever use the main Tintern car park, it’s worth knowing that you can reclaim a portion of the fee back from the purchase of drinks in the nearby pub. I missed out on this occasion as I’d opted for ice cream being sold around the corner.

4 thoughts on “A Wye Valley Walk”