An outing in the Brecon Beacons, led by Brunel Walking Group. 11 miles of cairns, crashed planes and steering clear of the tourist routes.

This was a ‘Joint Walk’ led by Brunel Walking Group, where both age groups were welcome to attend. 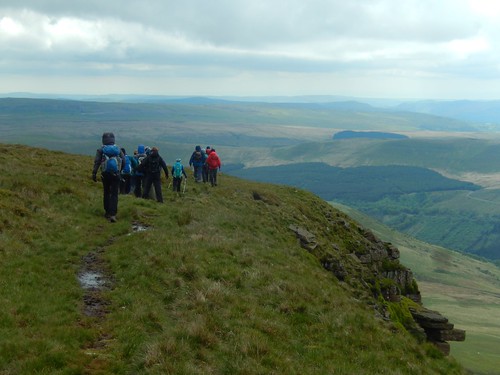 I’d been to the Brecon Beacons a few times and had always covered the same range of heights (Corn Du, Pen Y Fan, Cribyn…). But this walk promised to offer something slightly different and less frequented by the flip-flop wearing Storey Arms tourists.

After crossing the Severn Bridge from Bristol, we parked up at Blaen-y-Glyn, leaving only a few parking spaces with another walking group apparently beginning their own walk from the same location. 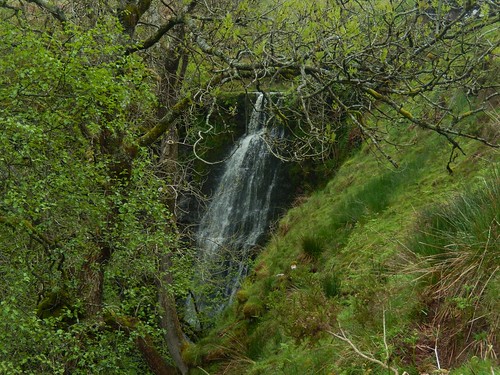 Immediately, we began to climb, following the Beacons Way up steep steps with waterfalls on either side. 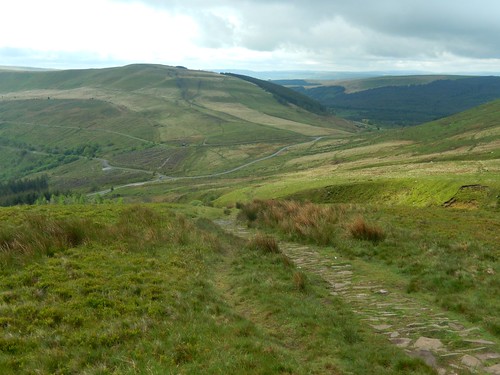 It was hard going from the moment we had left our cars. Few walks start out like this, even when we are close to mountains. 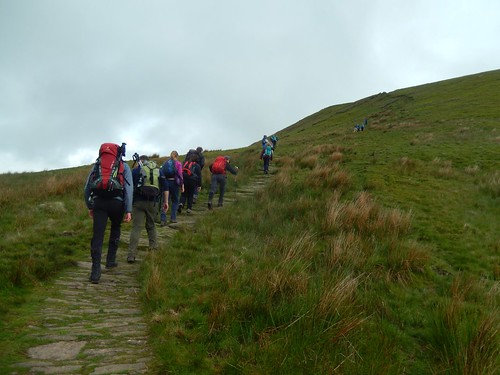 Eventually (and thankfully), our walk levelled out on Craig Y Fan Ddu, around 683m above sea level (and approximately 200m beneath Pen Y Fan, the highest point). We’d climbed about 240m to get this far. 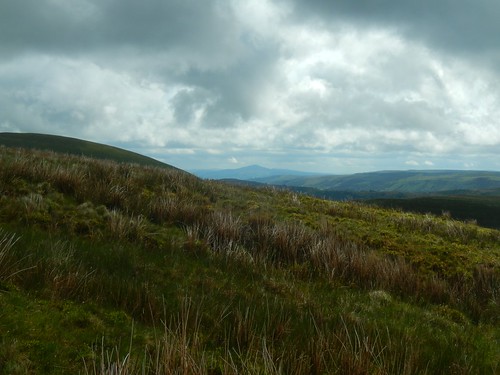 My geographical knowledge of South Wales is no better than in any other part of the country. You can see the rise of Sugar Loaf, here. I thought it would be south-east of our location but, it looks to be more east-north-east. 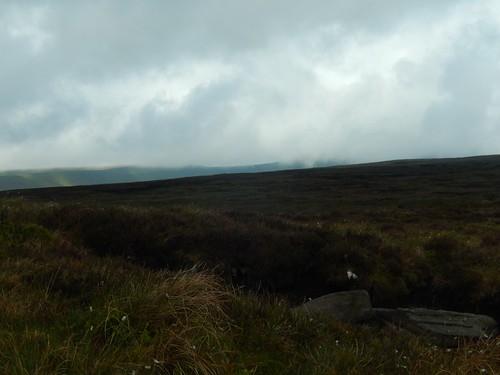 Meanwhile, in the other direction; cloud was looming over Corn Du and Pen Y Fan. 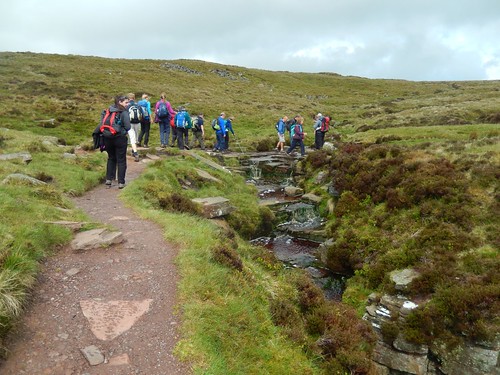 We would leave the Beacons Way at that crossing of a waterfall (Blaen Caerfanell) that had accompanied us on the way up. 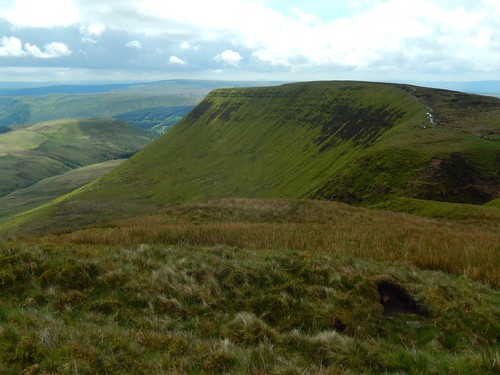 We followed the escarpment of Graig Fan Las northwards. At the floor of the valley beneath us now, was the car park from which we’d started. 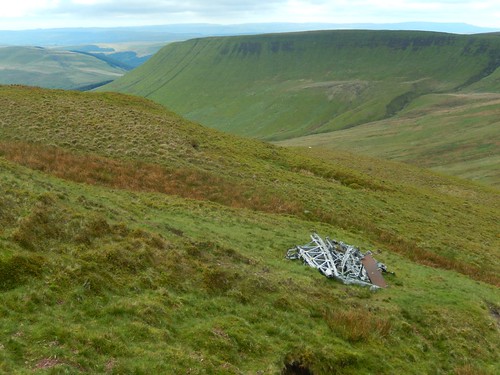 Making a south-eastwardly turn as we reached Waun Rydd, we descended slightly to reach the site of a crashed Wellington Bomber from the Second World War. 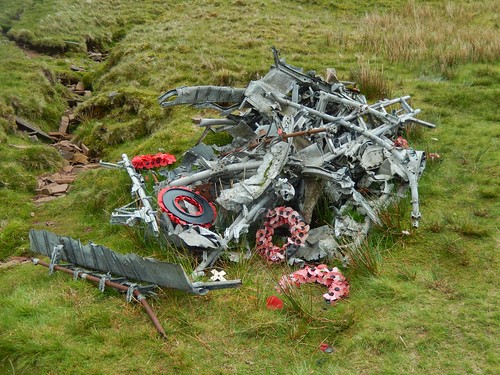 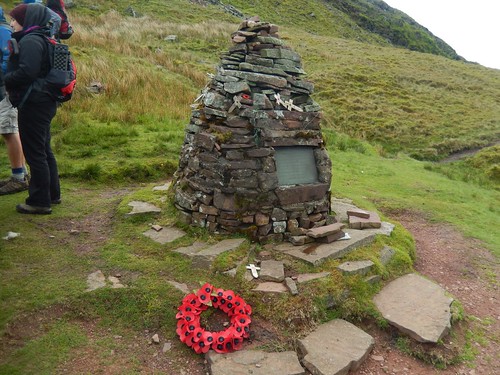 Of course, the wreckage has been tidied up over the years, from when it would probably have been scattered across the landscape, after impact. It’s possible there are further remnants deeper within the valley below. 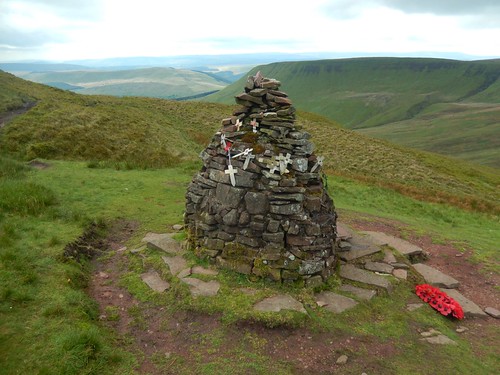 It’s said to be a crime to remove any of the material from this site and the same applies to other wreckages scattered around the Brecon Beacons and other parts of the British countryside (I know of others in the Peak District). 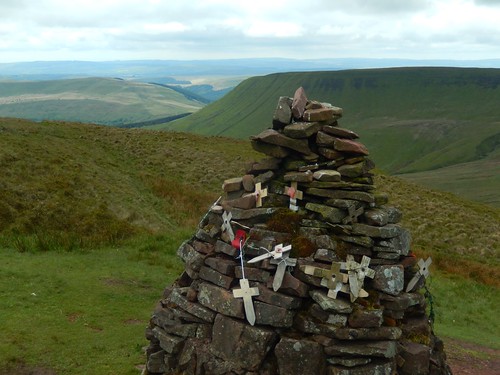 I’ll add ‘Further Reading’ links to the bottom of this post. 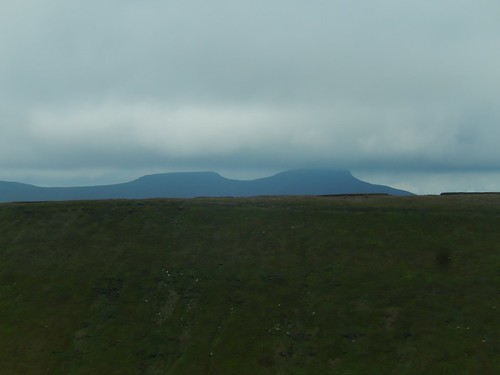 After pausing for a short break here with minimal shelter from the wind, we climbed back up and on to Waun Rydd (at 760m, it’s much higher than Sugar Loaf), where we could see the summit of Corn Du and almost glimpse the top of Pen Y Fan. 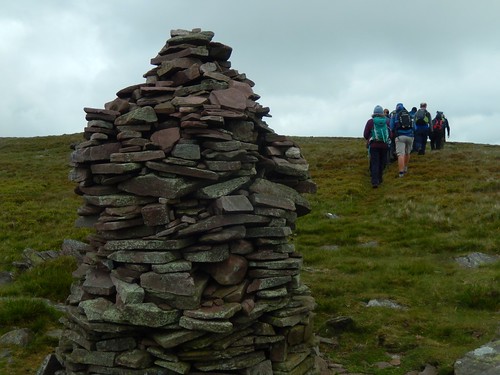 From there, we followed Cwar Y Gigfran to a substantial cairn to the south. There was no indication as to who may have been buried here but the stone pile was much taller than many I have encountered around the UK. 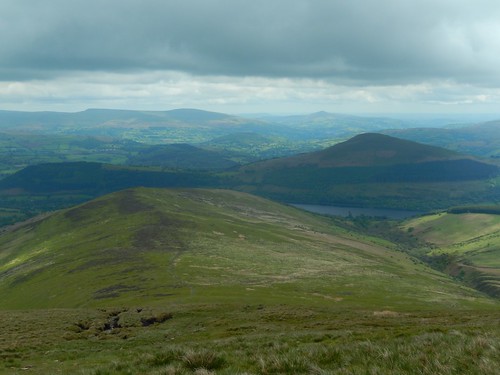 Stunning views to the south. I imagine this is what the Lake District looks like from many angles… You might be surprised to know that civilisation exists beyond those mountains and hills. 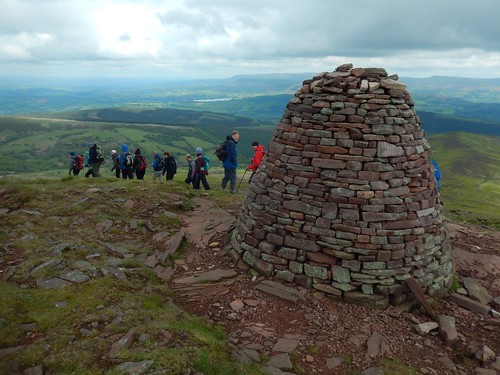 Still following the edge of the escarpment, we walked north to the site of Carn Pica; another substantial cairn but, one with a rather refined shape. Perhaps it replaced an older formation that didn’t survive. 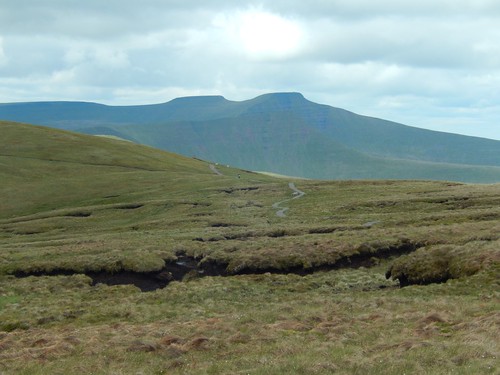 We dropped down the hillside briefly in hope of finding shelter and ate our lunch. Grass here was incredibly soft and also lumpy; a good combination for lying down (provided you can avoid any sheep poo and wet peat). It was probably a good time to be taking a selfie from the highest point as well. 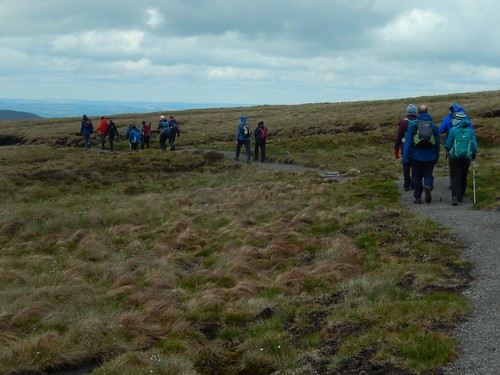 Fan Y Big was the one summit left to conquer on this walk. Some way to the west but perhaps 60m lower than our current location! 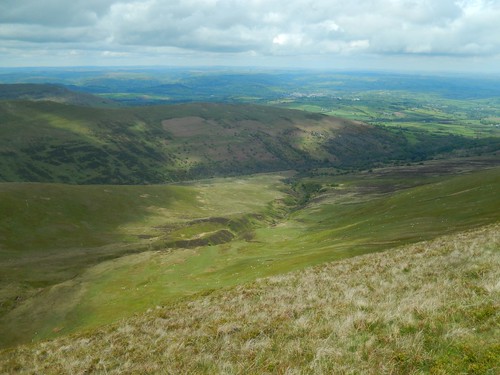 From Bwlch Y Ddywallt, to Craig Cwareli and Craig Cwmoergwm. I think I’m correct in pronouncing ‘Waun’ as “Wine”. But I’d still like to hear someone say ‘Bwlch’.

James and I spotted the town of Brecon to the north… Or so we thought. Kirstie told us we were looking east. I checked my compass and it said the same… But looking at a map now, I can see we were right all along. What the heck was going on?! A gravitational anomaly? It was as if the magnetic poles had shifted.

This is a decent overview of the three other peaks of what’s referred to as the ‘Central Beacons’. In time, I hope to explore more of the heights to the east and west, as well as the Black Mountains. 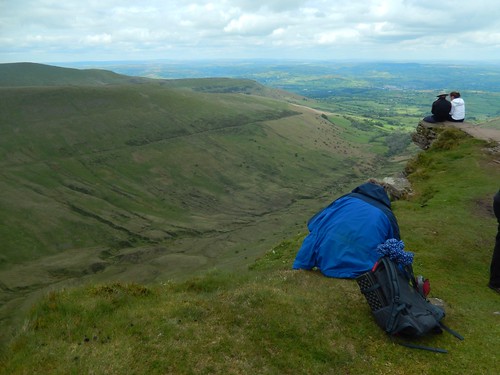 After reconnecting with the Beacons Way, we arrived at Fan Y Big (“Van E Bic”). This was only my second visit to this mountain but a first for my friend Linda and a few other people amongst the group. 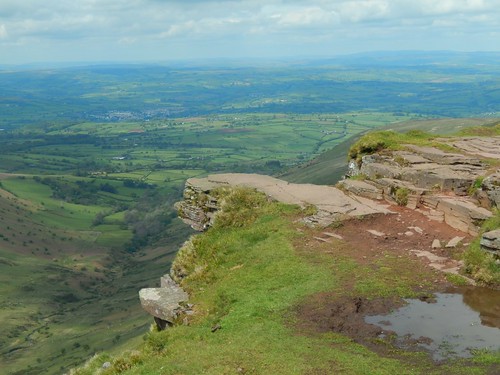 There was a queue to sit or stand on the ‘diving board’, before a couple of other walkers had decided to up and leave from their precarious seat. Again, you can see Brecon; definitely to the north! 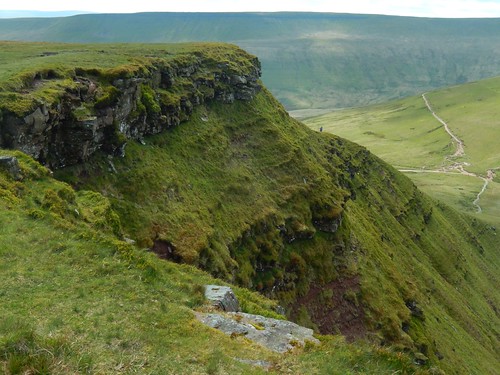 Still following the Beacons Way, our descent saw us lose 120m very quickly and, in some ways, I found this tougher than the initial climb up from Blaen Y Glyn. I’m sure I was using both of my walking poles on this day. 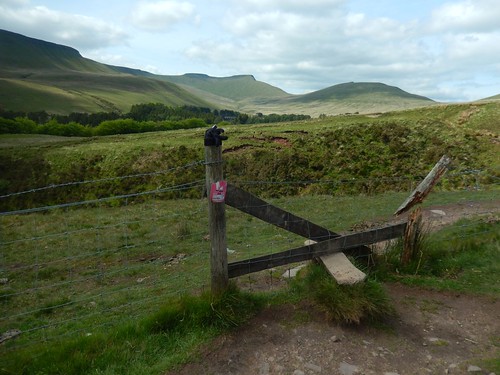 From Bwlch ar y Fan, we said a final goodbye to the Beacons Way and walked south above Upper Neuadd Reservoir to a point where we’d join the Taff Trail beside Taf Fechan Forest. We also bid farewell to the main peaks of the Central Beacons. 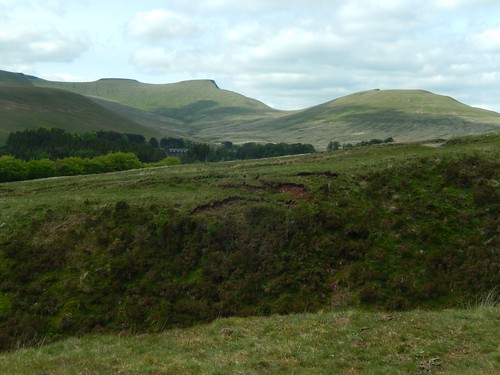 From Torpantau Station, we followed the steep tarmac road back to the cars. Our post-walk refreshment was found in a pub at nearby Pontsticill, just down the road.

While we saw what would’ve been familiar sites for many people, this was the kind of route that few people would’ve attempted on their own. It’s almost the type of experience where you cannot know what to expect or finding without getting out to experience and discover for yourself. Google has its limitations.

Crash Sites of the Beacons – Countryfile