This was a stop off in Shropshire, en route to a shared weekend and camping and walking in Snowdonia, with Brunel Walking Group. 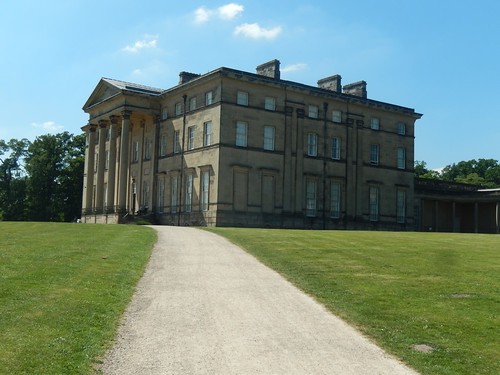 More than two whole months have passed since the experience but it all remains fresh enough in my memory for me to be able to finally begin writing. 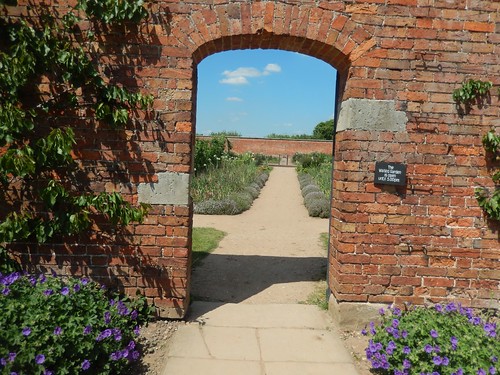 It was a Friday and I’d booked the day off work. We were due to be camping in Dolgellau, to the southern end of Snowdonia and in Mid Wales. From home, it would be a good three-and-a-half hours of driving at the best time of day… Being a Bank Holiday Weekend, I’d decided to set off early. 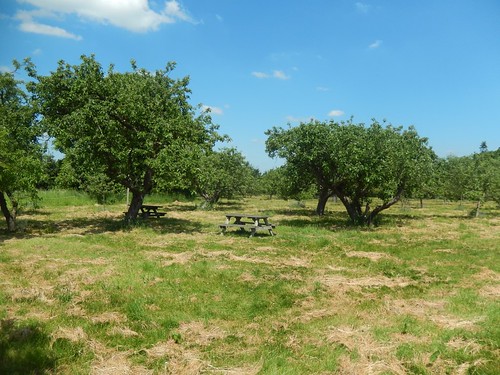 I reached Shropshire after what should’ve been only two hours of driving – but, I’d made the mistake of disregarding my SatNav to follow my nose; forever telling my GPS device that, once leaving the M5 motorway at Gloucester, I absolutely did not want to be driving anywhere near to Tewkesbury.

I got there eventually. Perhaps at the expense of thirty-minutes of my time. 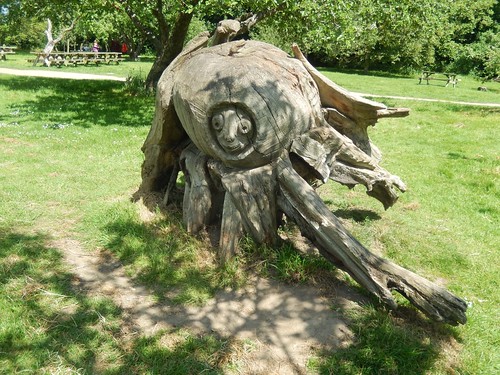 Having explored Shoprshire on a separate weekend in August 2016, I knew that Attingham Park might be a good place to pause in my journey and stretch my legs. By way of complete contrast, the service station off the A5 near Shrewsbury is not ideal for anything… Unless you enjoy finding yourself sat in bottleneck of traffic, devoid of any flow. 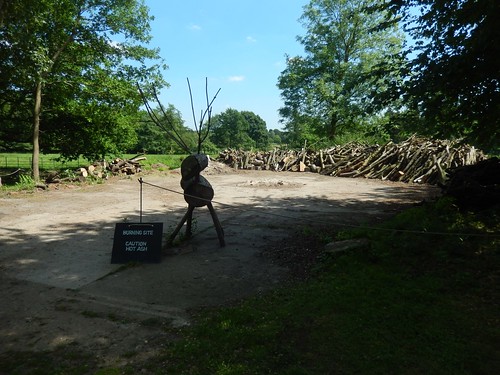 I’m not sure if I’ve even used my National Trust membership card since this day, which is quite sad, considering the membership fee I continue to pay… But also, it may be indicative of the fact that I haven’t yet done any solo camping trips this year.

This was a swelteringly hot day. It was close to lunch time and I was almost immediately able to purchase a sandwich, crisps and cold drink from the café within the initial courtyard area. After being greeted by the friendly admission staff upon entry. 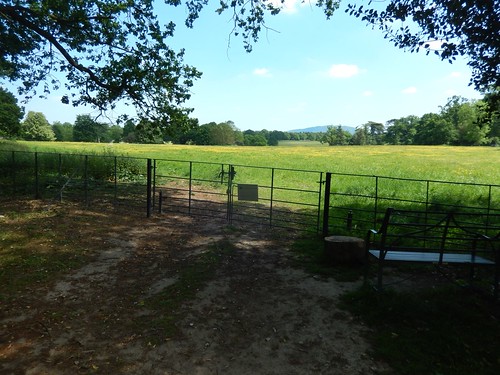 I’d already decided that I was going to give the house a miss on this occasion:

It was very hot and likely to be no cooler inside.
On such a busy day, the house was likely to be busy.
I don’t often enjoy interior spaces as much as roaming the outdoors. 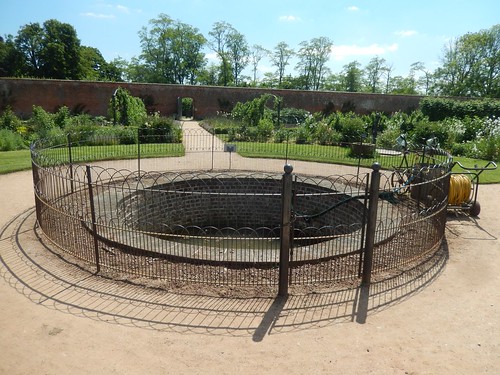 I began by following one of the longer guided walks, as plotted on the visitor map I had been given. Very early in to this walk, I entered the Walled Garden. Many National Trust properties have them. But, what I found most interesting, here, was the circular well positioned central to the enclosure. Today, it appears as though the water collected here is used to care for and feed the grass and plants.

Further on and I entered the woodland. By this point, I’d already found a spare bench with time to sit down and eat my lunch away from the biting sun. A dastardly robin, however, set itself down in front of me and chirped nonsensically until I threw a lump of bread in its direction. 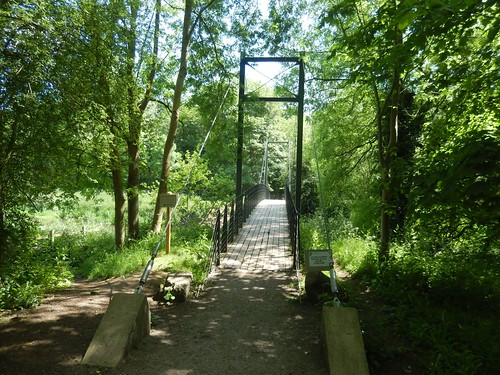 This bridge crosses the River Tern near Shrewsbury. It may not be as spectacular as the Ironbridge near Telford but, it’s far more substantial that many river crossings I’ve witnessed in woods around the UK. 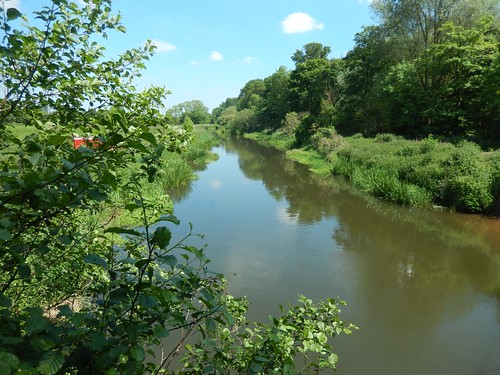 There weren’t many others out this far in to the woodland. Although I did overtake one young family and saw several small groups sat deep within the cool shade. 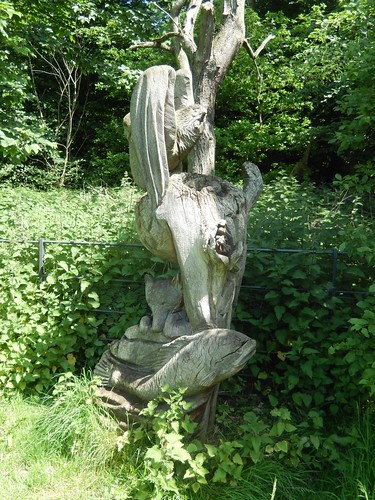 A number of wooden sculptures adorn these trails, with some being more easily identifiable than others. 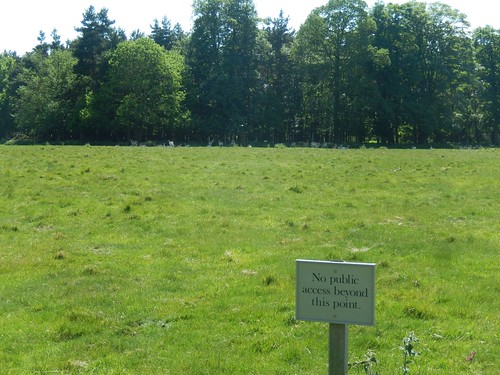 Eventually, I navigated my way towards entering the deer park. As with many reserves and enclosures of this kind, the rules clearly state that you should only walk on the footpaths beside coloured markers. 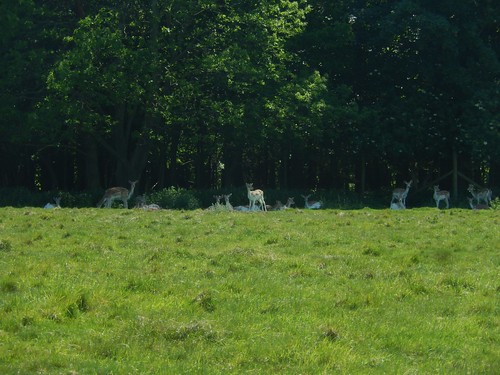 These looked to be fallow deer and, having entered the park without any expectations of finding one; here, they were many. 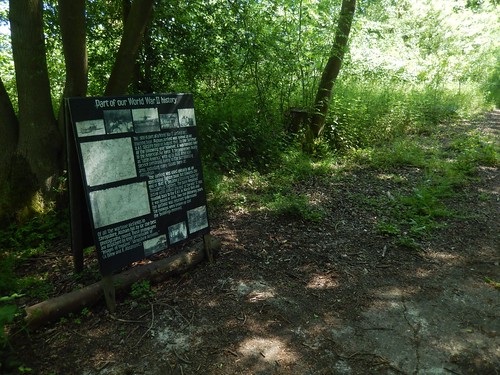 From exiting this first portion of a deer park via a wooden gate at the far side, I stumbled a site of significance, dating back to World War II… This area was once a part of Atcham Airfield.

Continuing one with my walk and crossing the deer park once again, I soon arrived at gates leading to and from the estate. After some head scratching, I realised I’d taken the wrong path at a junction and would soon find myself staring up at the B4380 viadcut. 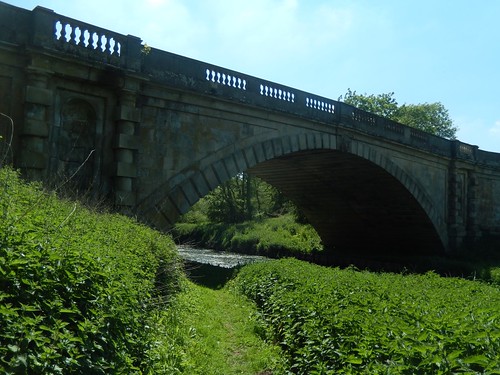 Making an about-turn and heading back in to the estate, I knew that I was running out of places to walk in and explore. 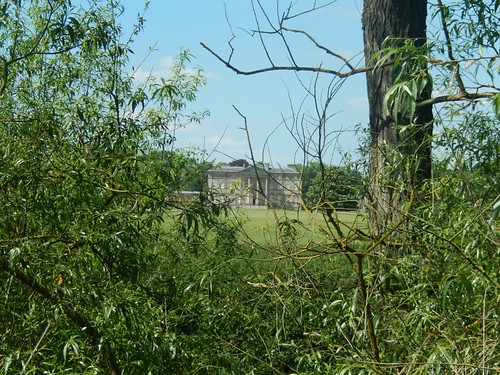 But before the image of the house grew too large, I would pass collections of further fallow deer, sheltered beneath the occasional tree. 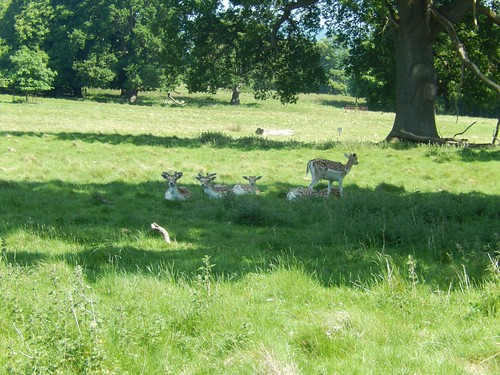 Another bridge led me back across the River Tern. 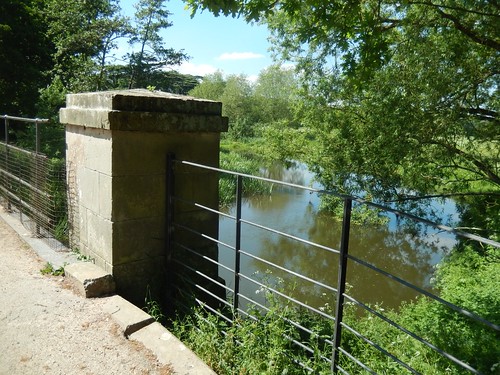 This one, even more substantial than the last. Suitable even for vehicles to cross, I imagine. 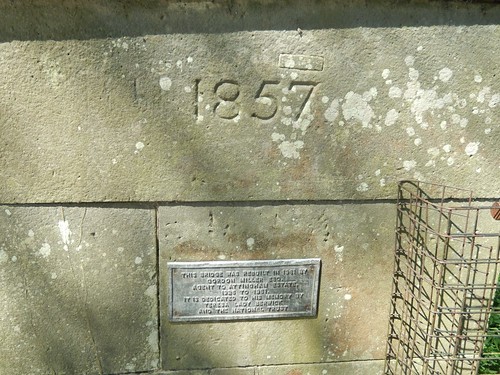 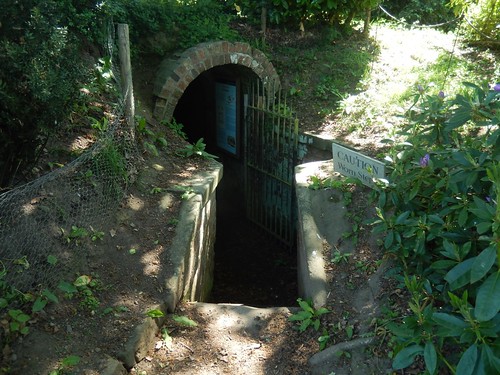 I found my way around to the sub-ground level entrance in to the ice house. Again, this kind of feature is typical of many National Trust properties. 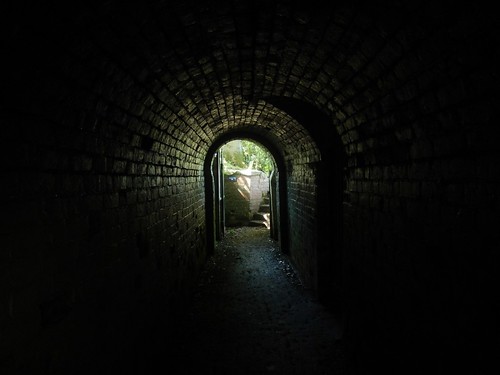 This was, by far, the most refreshing space to be in on such an incredibly warm day. Why nobody else was down here at this time, I really do not know. 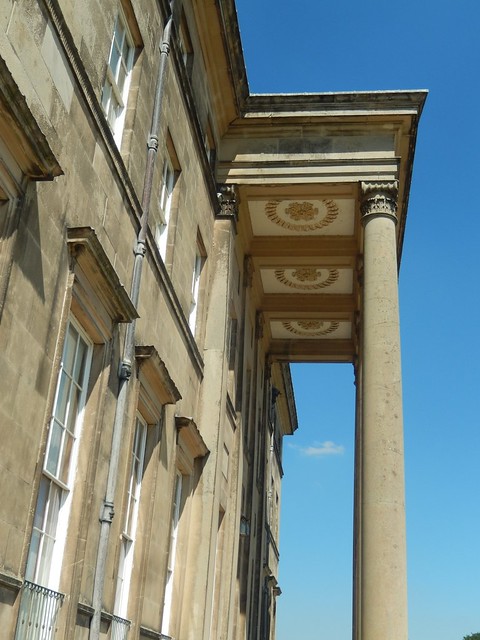 I would pass the perimeter of the main building, before snaking around to return to my car and complete the final ninety-minutes of my journey to Mid Wales. I felt somewhat refreshed, more relaxed and, at the same time, eager to get to the camp site and pitch before dinner time.

As for the house… I may save that for a return visit.