A five-mile walk from the camp site near Dolgellau in Mid Wales (May 2017).

My first full day in Mid Wales; the morning after our arrival. Some didn’t turn up or even pitch their tents until close to midnight! 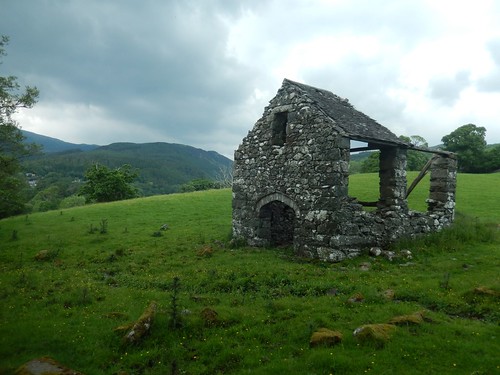 We awoke to the sound and chill of British Weather. Two walks were happening at the same time; both with early starts. Everyone was moving, I just wanted to slow down and breathe for a bit… So, I ended up spending the day intentionally alone.

From the camp site, I was able to get myself going along a short late-morning walk around the local area. Within the hills above Dolgellau, with the mountains of Snowdonia National Park to the north and south of my location, I was bound to encounter something. 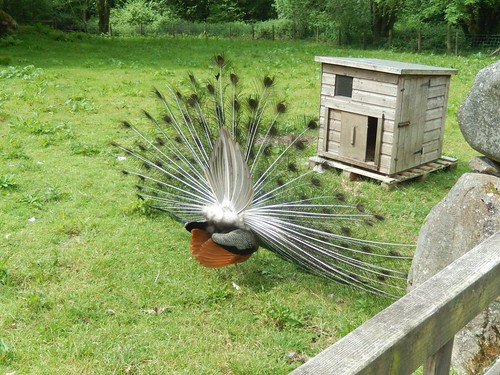 My only true regret thus far was not being in possession of an OS map – Sod’s Law determined that would land in my letterbox a short time after I left home the day before! I was relying on OS Maps screenshots, saved to my phone, for navigation. 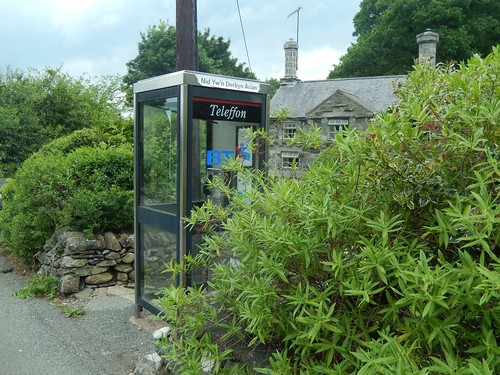 In England, red phone boxes can be a rare sight and, even when you do encounter one, you’ll often find it’s been modified to host a local book exchange library or, a life-saving defibrillator. But a BT phone box…A BT Teleffon phone box… I honestly cannot recall the last time I had seen one of these. 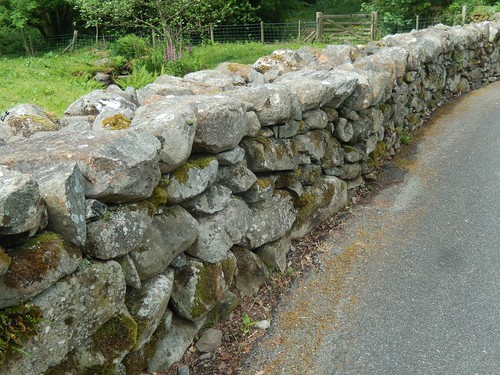 Officially, this was Mid Wales and I’d only been to North Wales once before. I do appreciate the frequency of dry-stone walls in these rural areas.

On the subject of roads: if my boss hadn’t mentioned this beforehand, I might not have considered it at the time. But the roads are Wales are, generally speaking – and, in my own experience – an awful lot better than the pothole-ridden state of highways across North Somerset. I doubt many local garages would complain, with the regular need for tracking adjustment and tyre changes but I’ve become increasingly aware of just how bad my local roads really are. 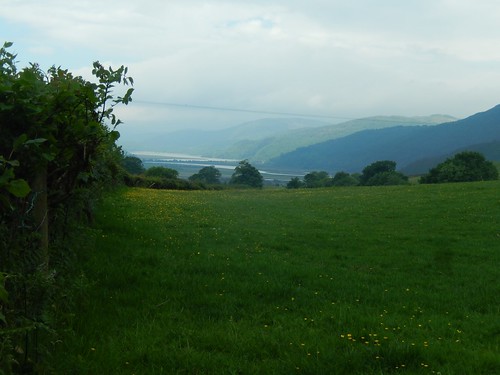 Initially, I walked these roads, heading northwards with confidence and less of a need to navigate. I passed a couple of caravan parks and camp site farms, soon to find this view looking west towards Barmouth, where the majority of our twenty-strong group had gone for the day. 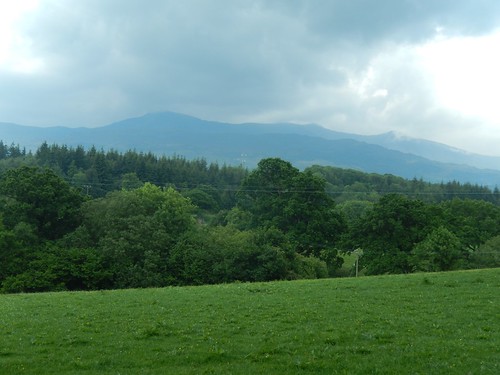 To the south of me: mountains. These were clearly visible from my tent door and, if I’m not mistaken, Cadair Idris (to be the subject of Sunday’s walk) is up there somewhere. 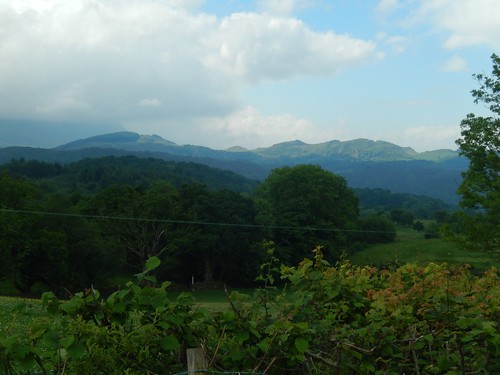 There were mountains to the north as well but, without a map on hand, I didn’t stand a chance of identifying them. I don’t Snowdon is visible.

So, there was a considerable amount of cloud overhead. We already had two walks on our programme for the day and I’d suggested the possibility of doing a walk up Snowdon – I’ve still not done it and I knew there were a couple of others within the group… But the majority were not in favour of the hour-long drive, the fact that this was a Bank Holiday weekend and, well, rain had been forecast.

If you’re going to brave the most accessible of Britain’s ‘Three Peaks’, I’d say it’s advisable to do so on a day where you’re less likely to meet flip-flops and selfie sticks. More importantly; to have the reward of panoramic views. 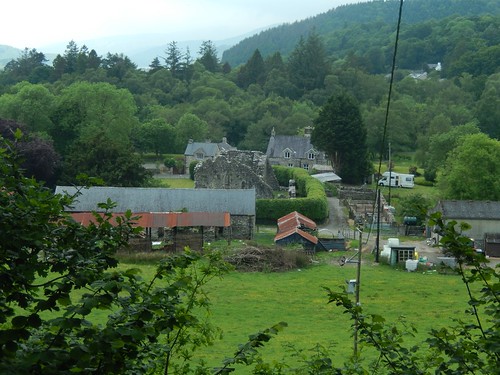 Continuing on and along these fairly quiet roads, I was looking to make my way down to explore the remains of Cymer Abbey, which I could see far beneath me. 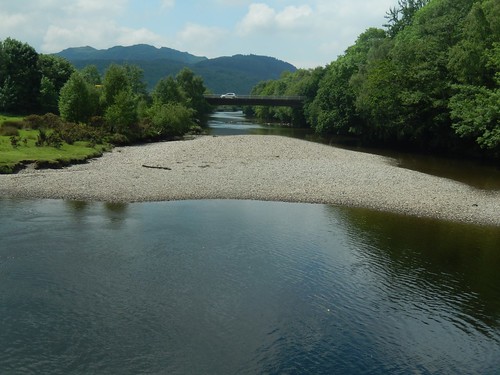 In short: the road I’d initially followed was leading me off course and I’d have to regain my lost height to continue on to a marked free-to-use car park near the crossing of the estuary. 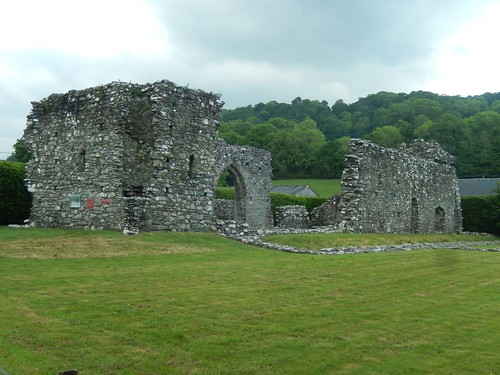 From here, brown signs directed me through the caravan park and eventually to Cymer Abbey. There’s also space outside the ruins for a couple of cars. 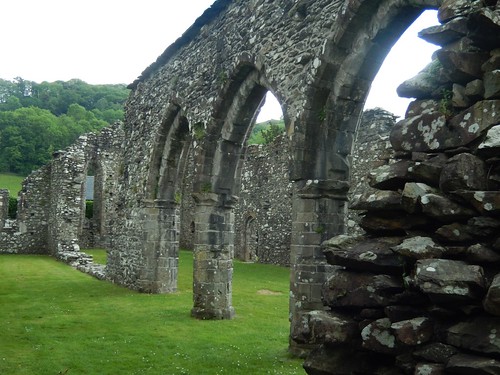 Close to the village of Llanelltyd, this attraction is free to explore. 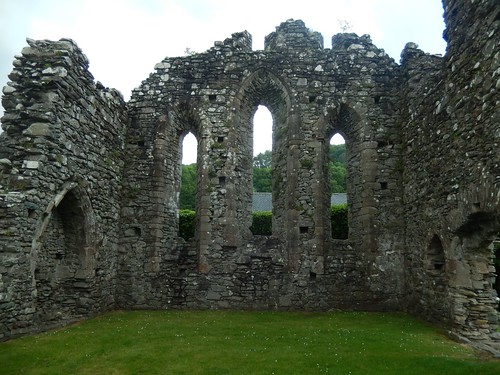 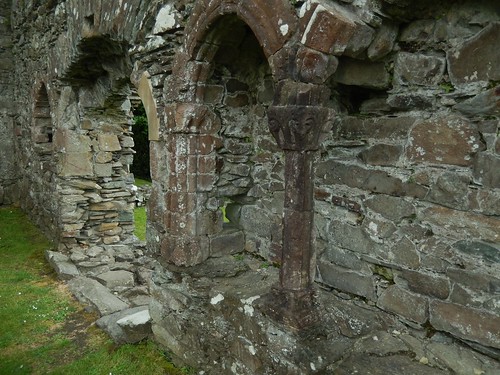 If there was a donation box, I’d have deposited some of my change. 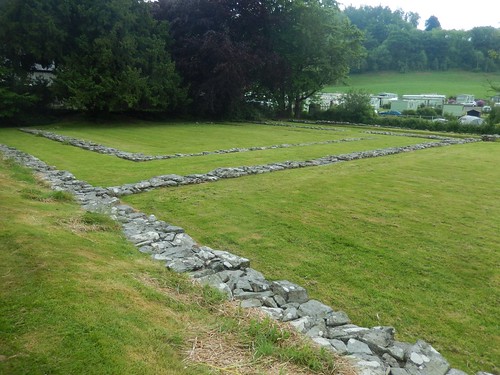 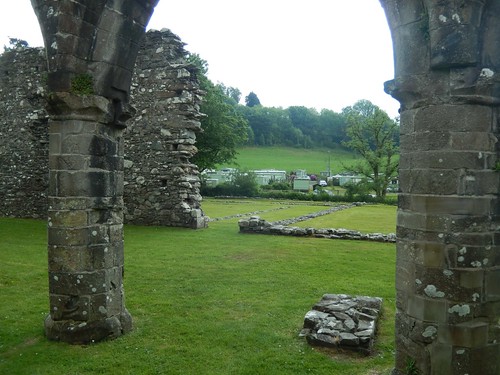 Just watch out for the neighbouring holiday park! 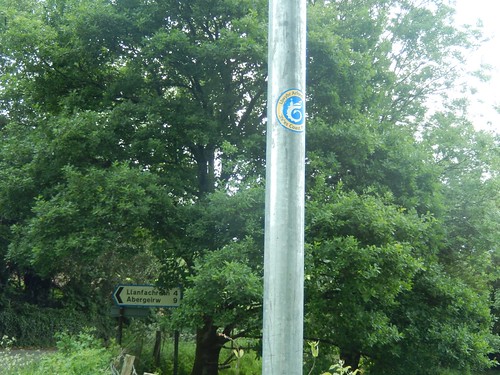 I remember eating my lunch on a vacant bench at the car park I’d found earlier. On retracing my steps back uphill, I noticed this marked for the Wales Coast Path on a lamp post…

But this is several miles inland from Barmouth! On the map, I can see two parallel roads slightly further out to sea and, beyond them, there’s a footbridge (toll) that I believe can be crossed at low tide.

Looking now, I can see that Ruth crossed Barmouth Bridge while walking the Wales Coast Path last year. Other members from my group took advantage of “the ferry”… And I think the train left much to the imagination. 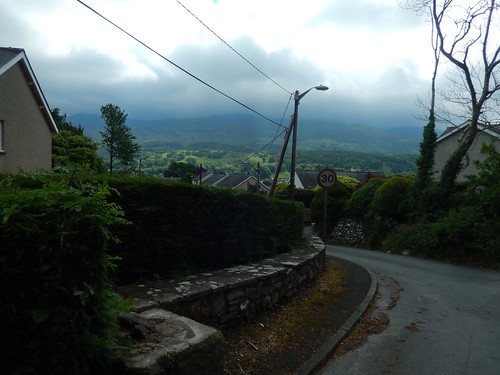 In my efforts to get back in to my tent before the inevitable rain fall, I took a signed footpath up through Pentre Farm… Only two meet two unmarked gates with no discernible footpath beyond. Back to the road, then!

An undeniable bridleway led me on to my intended route, close to a golf course. Navigation, at this point, was quite straight forward; staying behind the houses. 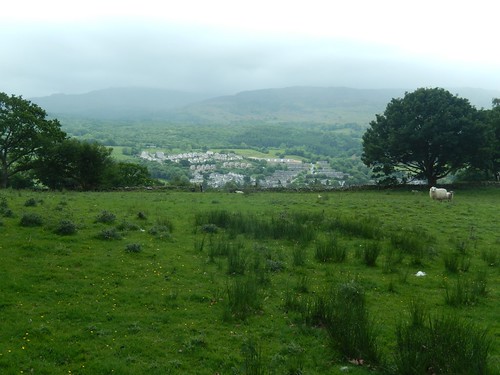 I dropped south across fields and ladder stiles from Tyddyn Bach. Again, Dolgellau was beneath me. At the very foot of the valley would be the Afon Wnion river. But the waymarking was long gone. I really did need my map and compass to navigate my way across these final fields and, mostly, through open gates. There were no clues on the ground.

I’ve encountered this before in other parts of Wales… How do the local dog walkers manage without a map? 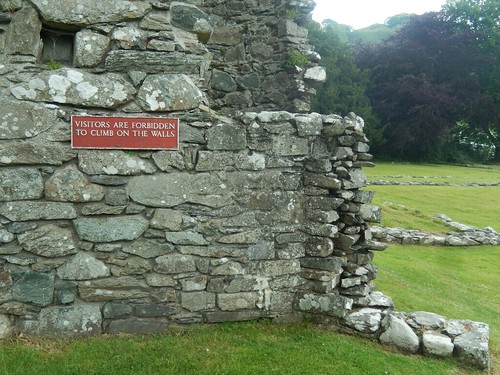 I wasn’t quite able to escape the rain before drying off in my tent. Straight after lunch, the wind picked up and a team of neighbouring volunteers swarmed in to help save many of our tents from being picked up and carried away with the weather!

By the end of this day, people were as keen to hear of where I’d been as I was to hear of their adventure(s).

Distance of this walk: 5 miles