I will rarely go more than a couple of months without heading south for a walk on the Quantock Hills. In several ways, I prefer walking there to the thought of exploring the Mendip Hills on my doorstep. Depending on where I start the walk from, the drive can take less than one hour. 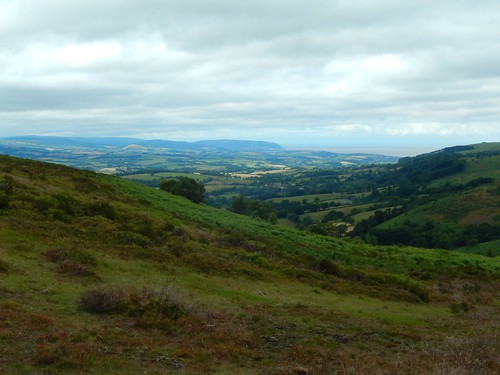 This walk was led by another member of Brunel 20s and 30s and, nearing three months later, I am surprised that I’ve not been back since. But then, I’ve also been quite busy with walking and camping in other places.

We started from the Dead Woman’s Ditch car park which, although I’ve never used it before, is actually in a reasonable location for anyone who doesn’t fancy trudging all the way up from Holford just to get the views (and, there’s no parking charge). 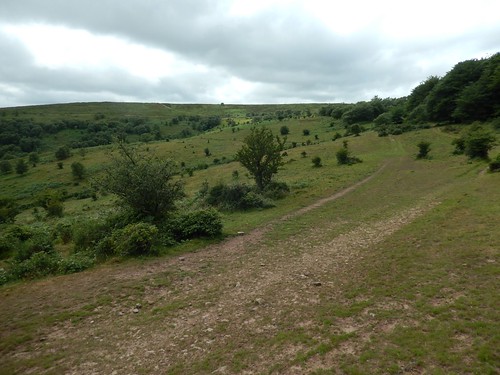 From the Ditch car park (location of the actual ‘ditch’ is uncertain), our walk began heading south, down in to Rams Combe and passed the convenient toilet block (where pay and display parking does exist) before climbing up to escape the woods and break out on the Aisholt Common. 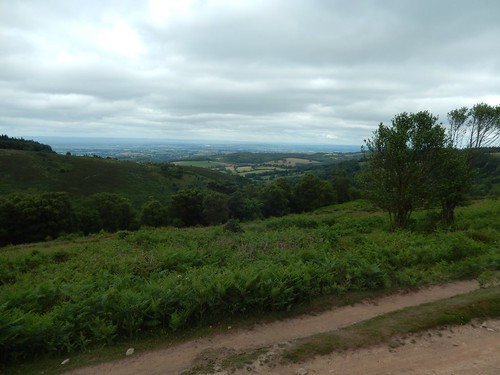 These are all places I’m reasonably familiar with and, to be honest, I’m less likely to venture to a ‘new’ part of the Quantocks unless it involves fighting through the overgrown and obstructed rights of way that exist to the south, heading away from the main gathering of high points. 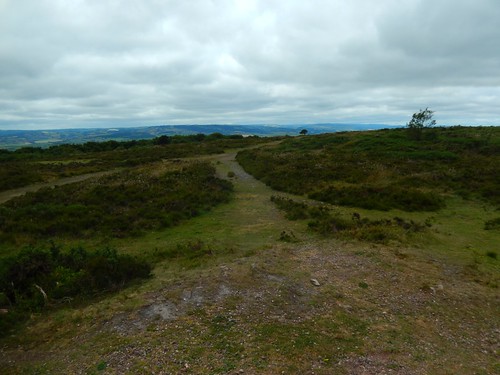 Our views opened up on the slight climb towards Wills Neck – the highest point in the Quantock Hills (384m above sea level) and marked by a spanking white trig pillar (instead, I’ve chosen to point my camera away from the trig to include a all-too-often-photographed tree). 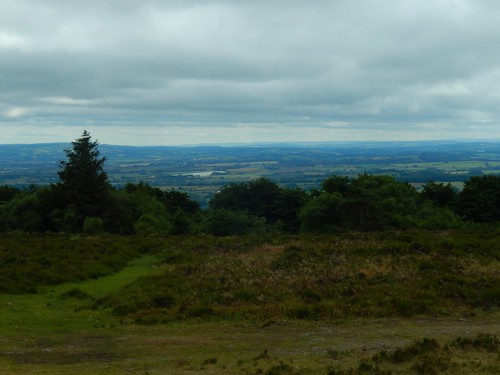 Dartmoor exists just beyond the horizon to the south although, some of its tors are easier to spot from the heights of Exmoor, west of this location. …I bought an OS map for Dartmoor at the start of this year and I’ve still not been! 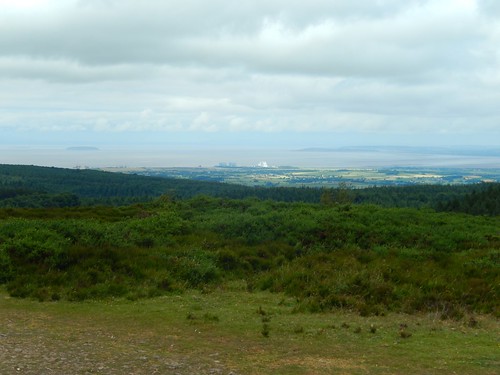 Hinkley Point and, it’s ‘C’ expansion to the left, is always hard to ignore. But, I’ll try and keep my opinions on that to myself… For now! 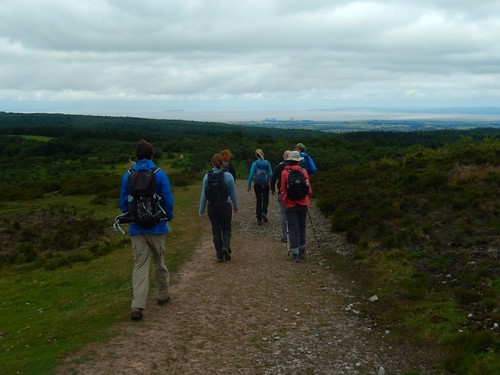 We must’ve stopped for lunch outside the woods and before reaching Wills Neck. Otherwise, I can’t think of where else we might have paused and it wasn’t the warmest of days, although a dry one – hence, why everyone’s wearing either a fleece or jacket. 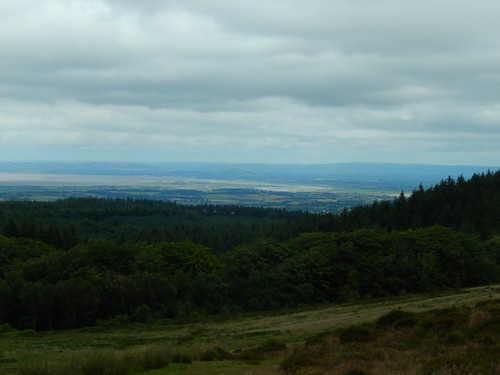 Walking north along the MacMillan Way West towards Black Hill, we could soon see the estuary near Burnham-on-Sea and the coastline running north towards Brean – one of the longest uninterrupted stretches of beach on the entire planet. 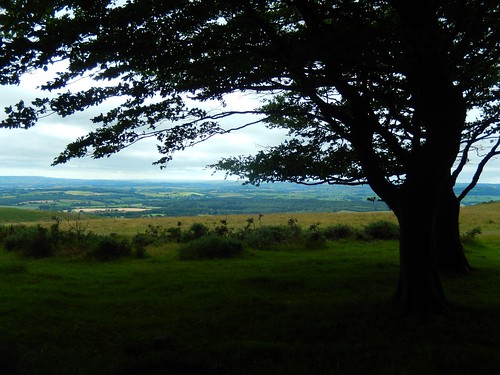 From Triscombe Stone, we followed the old drove road beneath ancient trees, still heading north. There’s every reason to want to walk along the other side of the fence with clear views west to Exmoor… But, I wasn’t going to argue – last time I was there, I met a herd of intimidating (and ultimately harmless) Highland Cattle, guarding the exit. 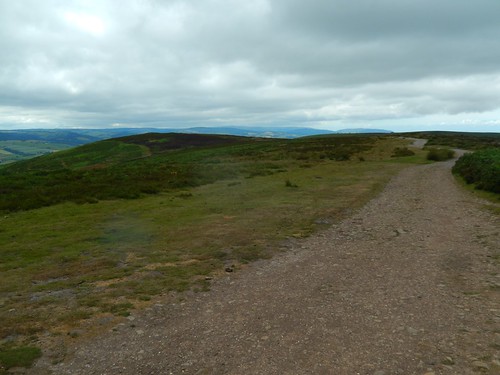 I also neglected to take any photos of the trig point on Black Hill (358m above sea level); probably because I’ve done it so many times before. From there, we’d turn east on a reasonably level return to the cars near Robins’ Upright Hill.

On my own, I would usually extend this walk an extra couple of miles north to reach Beacon Hill. This summit (complete with a trig, naturally) stands at only 310m above sea level but, in my opinion, the views are superior as you can look on to the Bristol Channel (and pockets of South Wales) without any environmental interruption. If you really want to, you can pick out the white blob of Butlins over in Minehead… 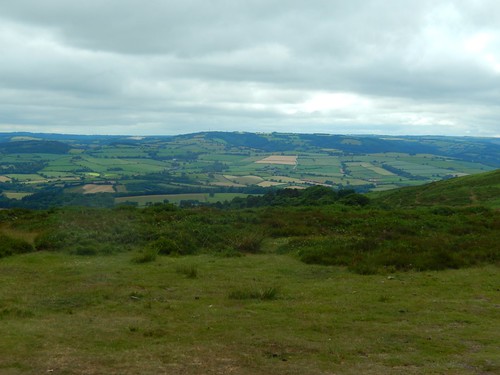 I’m sure I’ll make my return to the Quantock Hills soon enough. We’re at that time in the year where the nights begin to grow longer and the temperature drops. But, even on a warm summer’s day, I can often find myself feeling more at peace than at several other areas of outstanding natural beauty in the region. To me, these hills will always be a second home.

But, I’ve still got much to explore of Exmoor, further west and of the Brendon Hills, which I think I’ve photographed above.