In June last year, I went out to Bristol in search of a new backpack for day-hiking and walked away quite impressed with the Osprey Manta AG 28, which I believe is still stocked exclusively by Cotswold Outdoor in the UK. 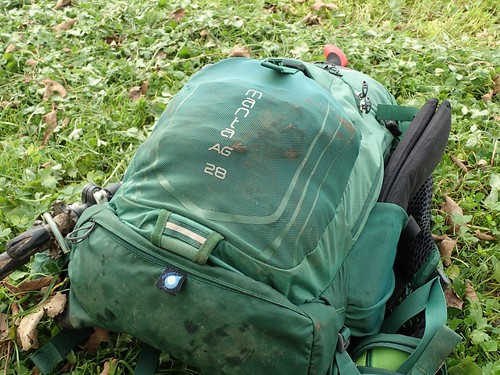 Over on Olly Writes last summer, I wrote a fairly preliminary review, while still satisfied. But now, almost eighteen-months later, has my opinion of this backpack changed?

So, within the space of sixteen months, I reckon easily walked one-thousand miles with this pack on my shoulders. It’s been used, abused and plenty of life remains.

This post will mostly be about ‘issues’. Anything not referred in my original post will still stand as part of my current opinion. 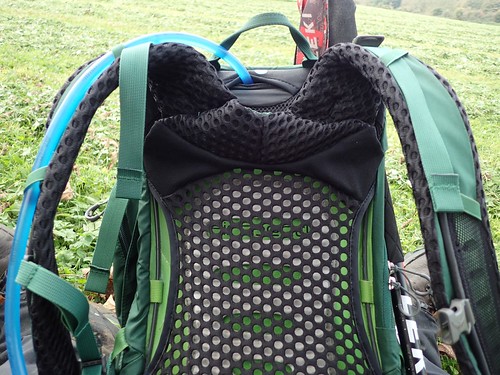 One of the key features of this pack, along with many other recent models from Osprey, is the suspended back frame with mesh allowing for breathability.

On the first day I wore this pack (June 2016), I found it was excellent. I could not believe how dry my back was after the first walk.

But, I’ve done many walks since where my back has become sweaty long before reaching the end… There could be a number of reasons for this but I don’t suffer as much with my Atmos AG 65 rucksack, which leads me to believe that such a frame works better with a larger pack (we’re possibly talking 40lt volume and above). 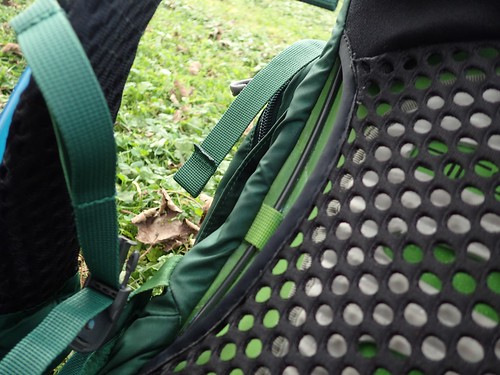 It’s well documented that many of these Osprey packs squeak with annoying regularity. Sometimes, I’ll have a good walk; on other days, I’ll find it squeaking with every step.

From a functional point of view, I still find that the rigidity of the frame helps to keep the load off of my shoulders (provided my pack is organised evenly) and I don’t feel any strain beneath my neck.

…I do suffer the occasional ache on the back of my neck but that could be due to me carrying too much weight or walking too much with my head down.

A possible cure for the squeak…

After a lot of searching and reading online, I chanced upon the suggestion that silicone spray can be used to help reduce the squeaking and this has definitely made a big improvement for me! I apply it around the edges, as in the photo above. I think it’s caused by the frame rubbing against the fabric. 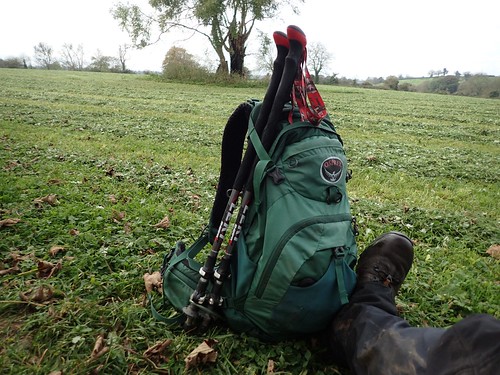 On most walks, I’ll carry a pair of walking poles with me. But, in truth, I rarely use them (I’m often carrying a map and camera) unless it’s either very muddy and wet or I’m facing very steep inclines and descents.

So, not using them as often as I could, I do not make enough use of the Stow-on-the-Go feature, even though I quite like it. I’d rather keep the poles on the rear of the pack but, there are no designated attachment loops on this model. I do use the tensioning straps near the top but it’s less convenient when you need to open the main zipped compartment and get inside.

On top of that, I’m having to use my foot to keep the pack upright – a minor niggle but one I encounter more frequently in the wet weather. 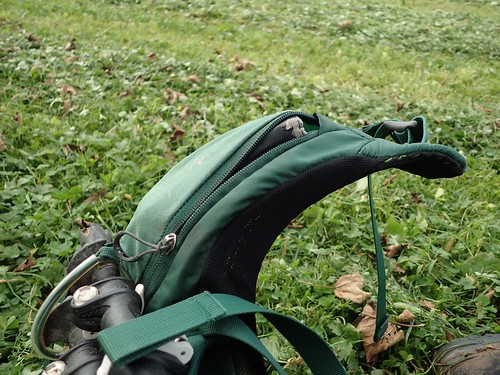 There are zipped pockets on either side of the hip-belt that I do use on every walk. In one, I’ll keep my camera, while either my phone or a compass with live in the other.

They’re probably not as waterproof as a dry sack neither of my electronics have yet to suffer in here. I do wish the pockets were slightly bigger (you can see my smartphone – a ‘mini’ model – poking out above) and the zips can be tricky to close. 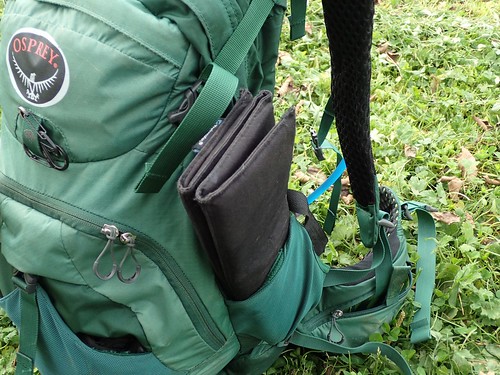 On each side of the main body of the backpack, there is a stretchy mesh pocket. These can be accessed (with some difficulty) without taking the pack off but, when doing this, I’ve occasionally found I lose the nozzle off my Camelbak Eddy water bottle.

Now, I tend to keep my folding mat in one side and rarely much else in the other. Over time, I’ve found that storing one bottle of flash of liquid can unbalance the pack, which has given me shoulder pain on the opposite side. Instead, I try to keep my flask inside the pack’s main interior.

I remain happy with the two smaller pockets (front and above). 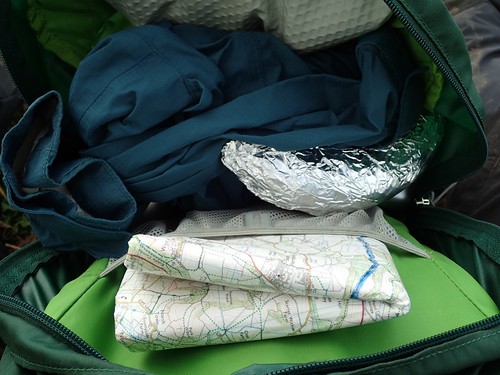 I also like the mesh pocket, which I use to hold a folded OS map or book. 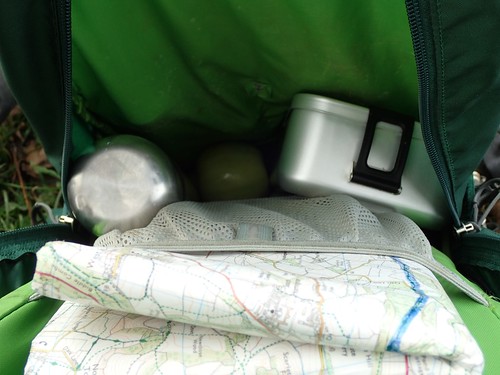 But beneath that, I find the space considerably narrow, to the point where it’s difficult to reach items at the bottom. I can normally hold just about all I need to carry for a day’s hiking at any time of year but, sometimes, it is a bit of a squeeze (of course, this may be a personal thing – we’re all different and may or may not typically pack less).

If you have any tips on storing and preserving bananas in a backpack – without resorting to one of those naff banana holders – I’d love to hear from you!

Part of the space issue here, I believe, is caused by the designation of a separate zipped compartment for a hydration bladder (not included with UK models). 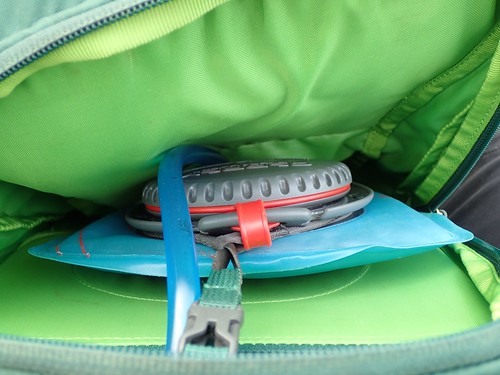 I’m fine with the strap for suspending the water bladder and also the point at which the tube enters and exits the compartment. But, please consider that my Osprey Hydraulics reservoir holds a maximum of 2.0lt in capacity… Surrounding that, there’s a lot of unused space – possibly more than the same volume again.

I’ve not seen another backpack like this and, at first, I thought it was a smart idea. Now, I’d rather have a pack with just pocket or sleeve to hold the bladder and retain a few extra litres in depth.

If I’m being really picky, I could bemoan the lack of a whistle along the sternum strap… 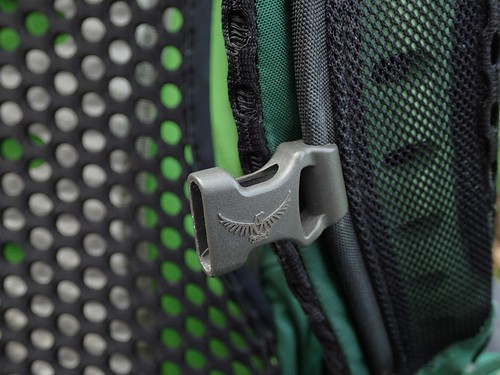 Time for a different purchase?

Well, it’s something I’ve been thinking about, I won’t lie! I do feel that, with all the regular miles I walk, it may be worth buying something with as much as 6lt of extra capacity. I’d also like a pack (like my larger rucksack) that incorporates and adjustable height system for sitting on your back. 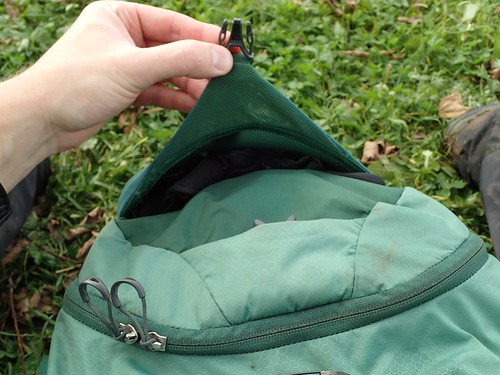 Currently, I’m looking at the Osprey Stratos models; available in both a 34l and 36l capacity… Why they couldn’t just produce one at 35l, I do not know!!

It has the adjustable back system, larger hip-belt pockets, dedicated loops for carrying walking poles and also includes a raincover.

But, I won’t be rushing in to buying anything this year. I do like the front mesh pocket (pictured above) on the Manta AG 28, which I find handy for storing gloves and wet items in a quick-access feature. By comparison, the Stratos has a vertical zip, here. Maybe I should look at other brands as well.

Even if I do make another purchase next year, I like the idea of keeping the Manta AG 28 for use as a cycling backpack… Whenever I may get around to buying a bike!

I hope you have found this useful and interesting. Comments and questions are always welcome.