My second walk in the Peak District for the year and another route taken from The Walking Englishman. 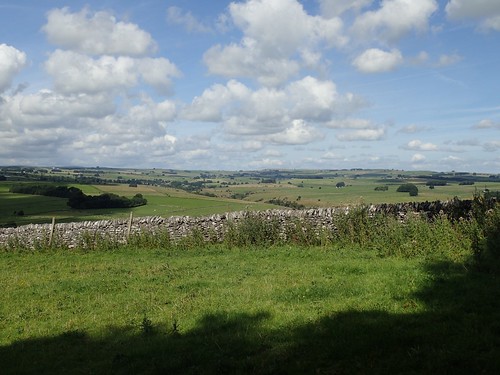 Two years previously, I’d not been able to do a second walk due to the state of the weather. Yet. here I was, with a very reasonable forecast for this day. 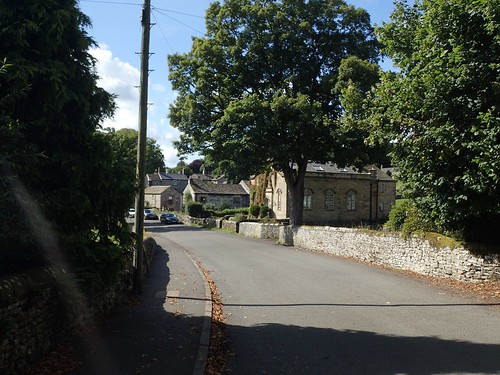 This walk begins in the village of Middleton-by-Youlgreave… Which, as the very name suggests, is situated close to Youlgreave itself!

I parked on the pavement towards the end of the road, across from the church. There are no designated parking bays here (and certainly, no pay and display) but as a Ramblers group of a dozen or so [much older] walkers was about to depart, I realised it must be a popular place to begin from. 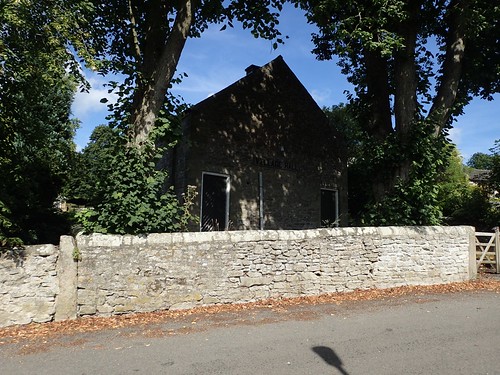 Technically, this walk takes place in the Derbyshire Dales – as if the lure of the Peak District and limestone-crested White Peak wasn’t alluring enough! It was only a short drive from my camp site at Chelmorton to reach here. 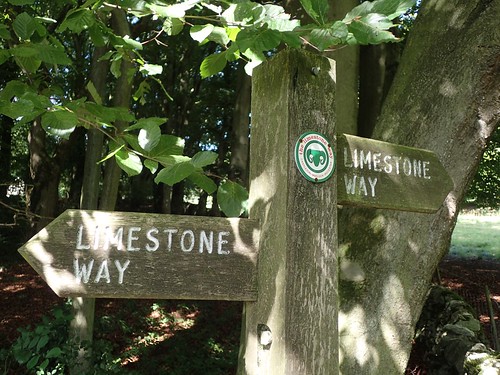 Walking north from the village, I would follow the road initially to join the Limestone Way near Lomderdale Hall. I hadn’t heard of this long-distance path before and it’s not to be mistaken for the Limestone Link, which runs by much closer to home, across the Mendip Hills and beyond.

But the Limestone Way is a 74 mile route running south from Castleton, deep in to Staffordshire. 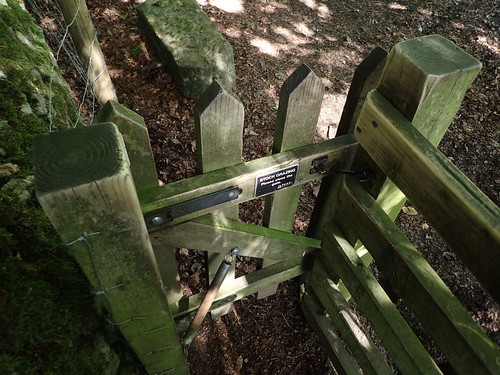 I would only be walking a minor fraction of it on this day. In fact, I’d pass through a greater number of Hobbit-height kissing gates than I would cover miles along this particular trail! Derbyshire seems to be a county where landowners can be bothered. 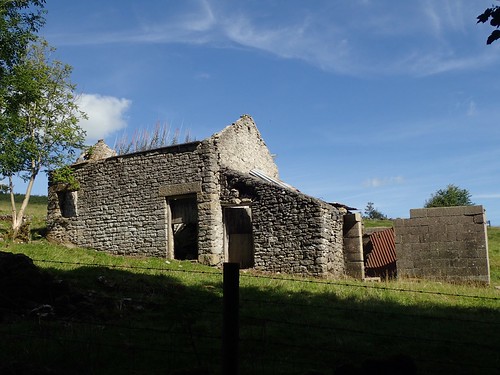 …Saying that, I also spotted at least half-a-dozen dilapidated and long-time neglected farm buildings throughout my four-day weekend. 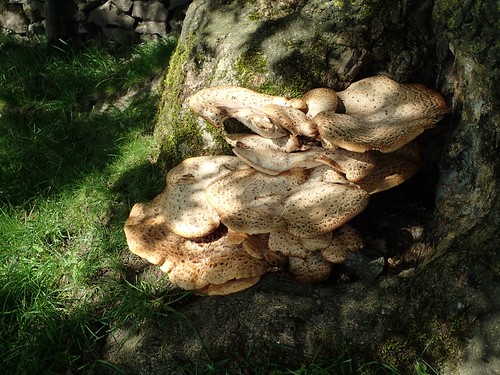 This would turn out to be one of the best weekends (weather-wise) in August and yet, at times, you could almost smell the autumn, waiting in the wings. 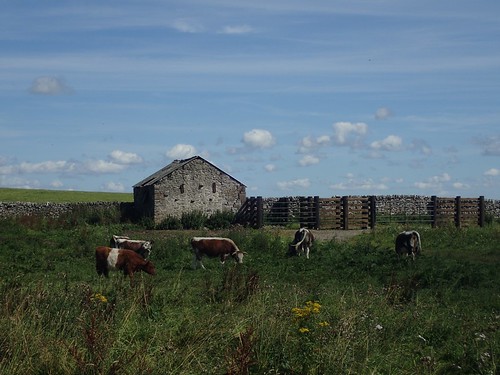 Away from the roads, I followed the Limestone Way across farm land and open fields. Waymarking was pretty good and I did not have to go anywhere near those cows, in case you were wondering. 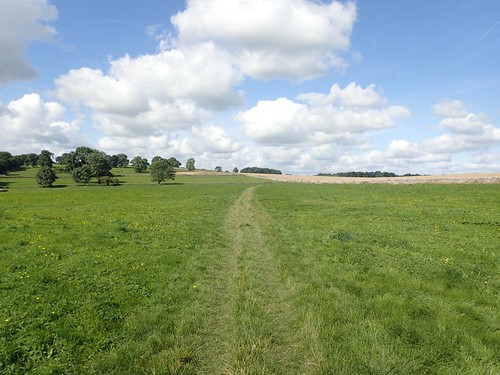 I soon passed and official car park (which I think was still free) and large layby near Calcite Mine, before following worn tracks across beautifully flat fields (this stretch must be a popular one, I thought). 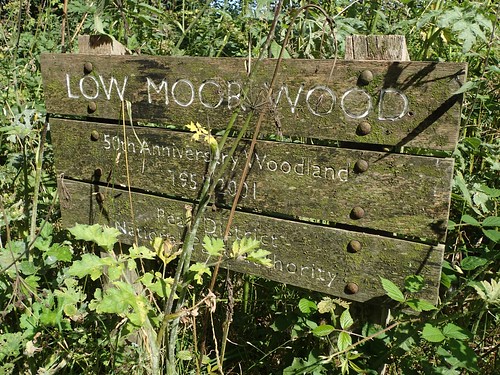 This route continues through Low Moor Wood, which was purchased in 2001 by the Peak District National Park Authority, fifty years after being awarded National Park status. 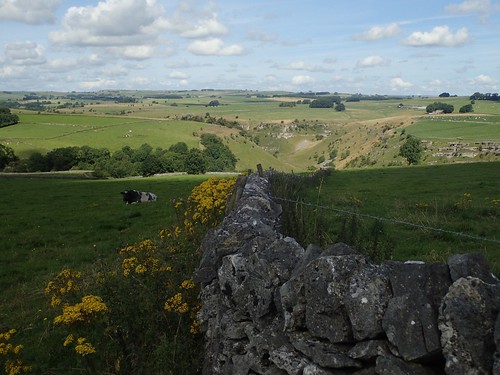 Beyond the far end of the woodland, I began to descend, passing a drystone wall. One lone cow looked on, perhaps grateful for a weekend of good weather. 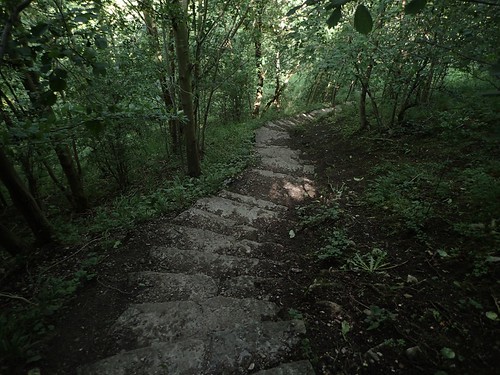 Somewhere at the foot of this valley was Cales Dale. Having passed two groups of people heading up the hillside, the set of steps would lead my knees along a painful descent. 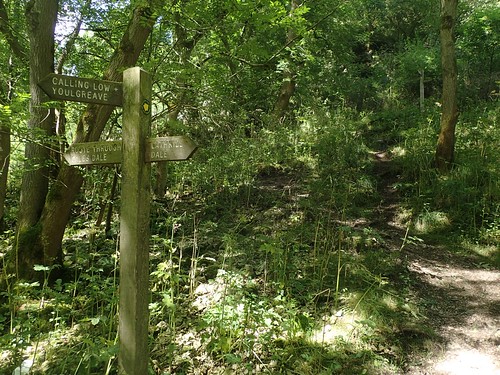 Having arrived at the floor, there was no time or direction to explore Cales Dale. I could’ve taken a shortcut on to Lathkill Dale but, no; following the route, I would immediately climb up the far side! 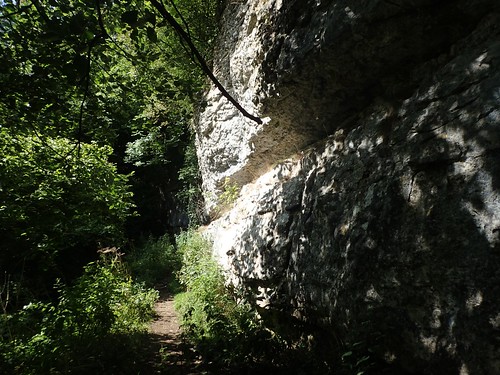 It was steep; I can tell you that much. Immediately on my right were great white limestone cliffs. 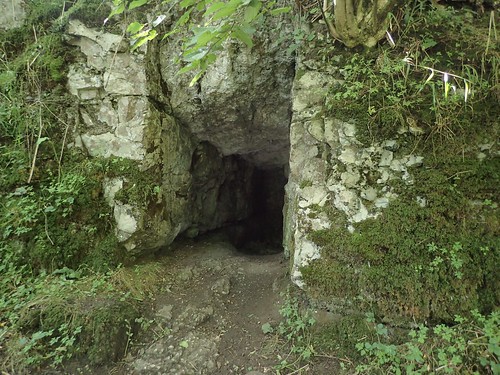 Before soon reaching the top, I would pause to admire this small cave or opening on my left. 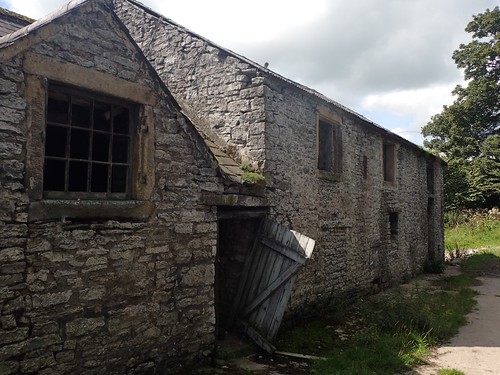 From here, the walk levelled out towards One Ash Grange Farm. The word “Grange” is used frequently for farms in this part of Derbyshire. I’d love to know why. 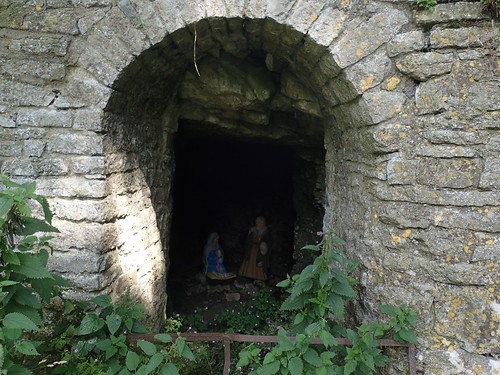 Inside one man-made opening on my right, I was surprised to find a Nativity scene. I wonder whether they dress it up around Christmas time. I’m not religious but I’m pleased to see it’s not been vandalised. 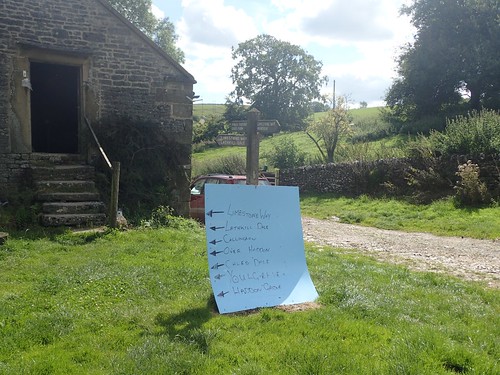 I should share some gratitude and credit towards the owner of One Ash Grange Farm for this excellent (if unofficial) footpath direction board.

Or maybe, they’re just fed up of finding people wandering all over their land? 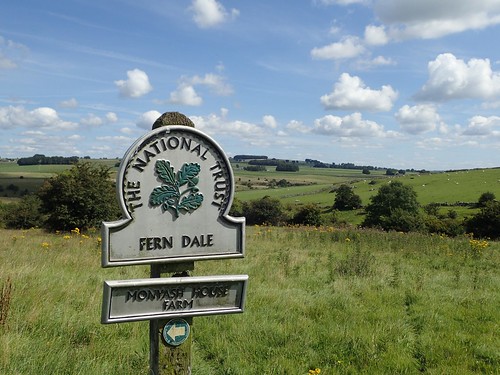 I soon arrived at the top of Fern Dale, where I would find a bench that would allow me to sit for a few minutes, snack on something, consume water and prepare for the next stage of the walk. 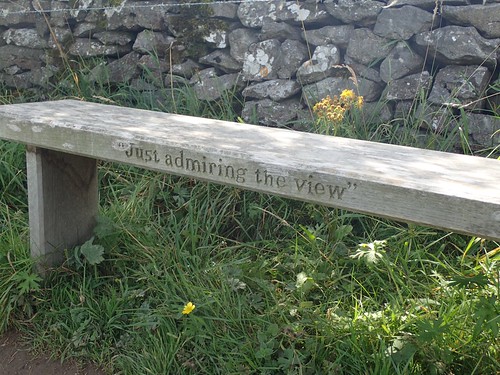 This meant saying goodbye to the Limestone Way s and follow and initially indistinct path down the valley of Fern Dale. 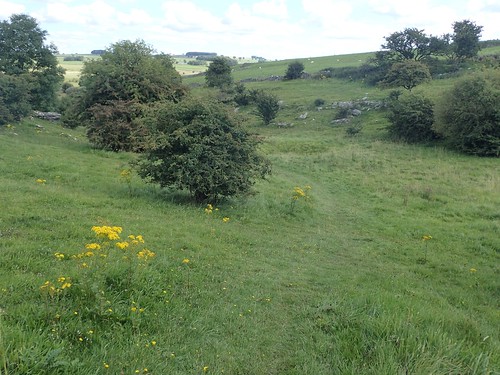 Dog walkers were ahead of me and I’d soon catch up with slow-moving couples I had passed before stopping on the bench. 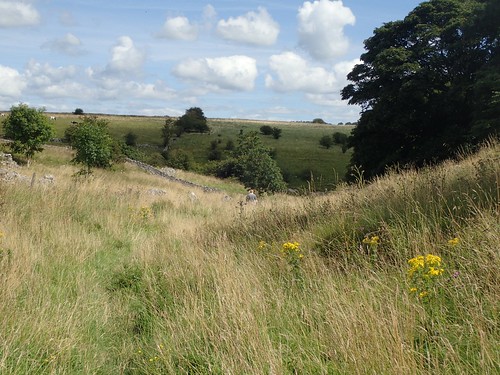 This could well set the scene for the next few miles of walking through Lathkill Dale. 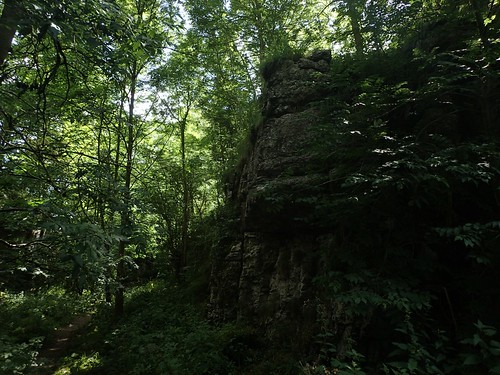 At the bottom, I turned right from the T-junction; initially walking beneath the shade of trees and clambering over large rocks and stone. This wasn’t flip-flop territory. 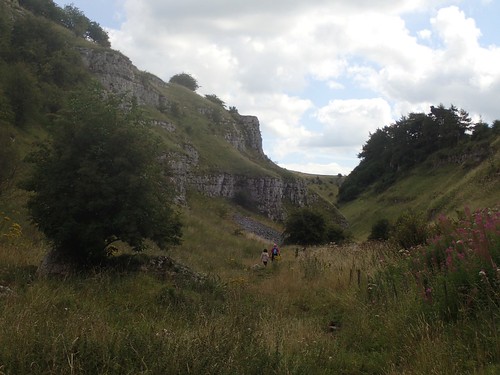 Ricklow Quarry used to operate very close by. But now, I’m very grateful that people are able to walk through and explore this area in peace. 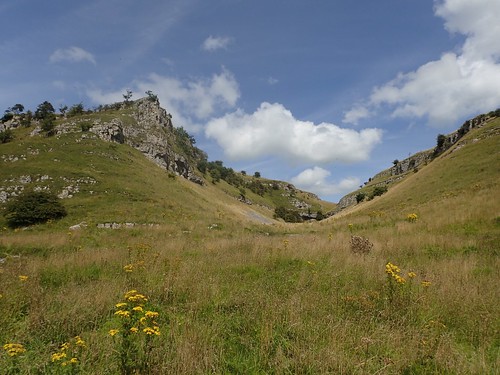 So much of the surrounding landscape, slopes and stone deserved to be admired. More people could be seen and, as I heard them, I tried to guess where they might be from, based on their accents…

But I think it’s quite unlikely that everyone visiting the Derbyshire Dales on this day had driven from Manchester in the morning. 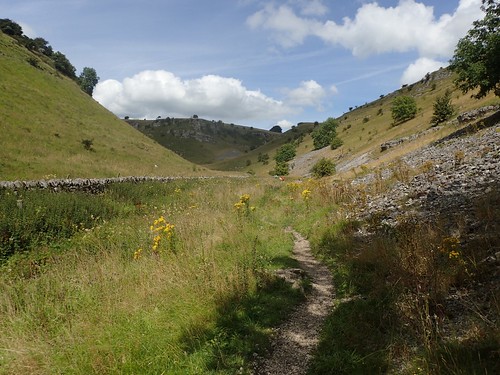 Following this valley in to the shade of nature once more, I would soon meet the River Lathkill; my guide for the next few kilometres of walking. 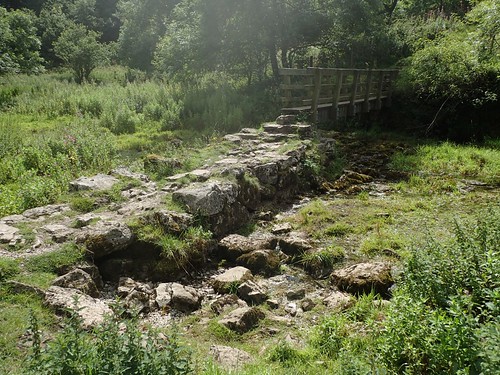