I’ve just spent a weekend in South Wales and I’ll be heading further west for the coming weekend. 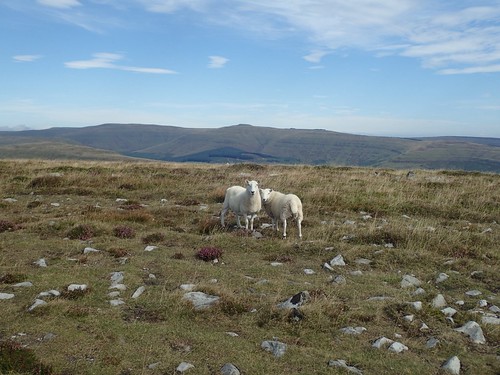 Now, I’d like to head back to August and recount a walk I did in the Black Mountains.

Having only been walking in the Black Mountains once before, my intention was to complete a larger circular walk that would include several summits and the highest point (Waun Fach).

Plotting the route had been quite easy; I was only challenged with finding a place to leave my car. I probably could’ve left it near the church in Llanbedr; a small village just north of Crickhowell. Instead, a used a layby at a road junction

OS Grid reference: SO 234 202, in case you’re curious. You could fit three cars there; maybe a fourth. But I wouldn’t personally use this one for a group walk. Another option (although, still limited for space, would’ve been to use another layby north of here and the start of a shorter circuit from The Walking Englishman. But the road does narrow towards this point. 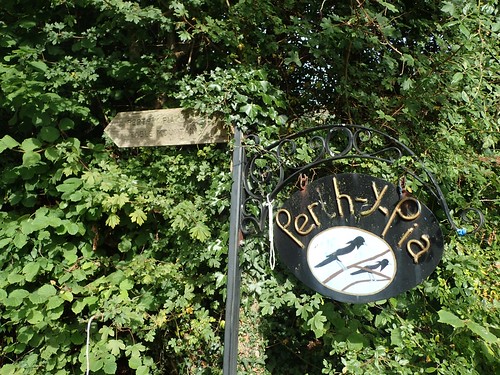 So, I started my walk by following the road north… After realising that was walking in the wrong direction for the first 100m. I passed Ty-Mawr farm on the right, before passing through the gates of Perth-Y-Pia on the left.

Perth-Y-Pia is home to an outdoor activity centre, although this isn’t detailed on the map (possibly due to its size, compared to where I’ve just been this weekend, over in Llangorse). 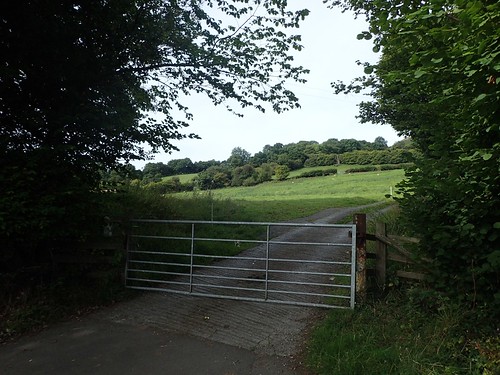 There’s a point on the OS map where the right of way leaves the vehicle track and loops around a field before rejoining the track ahead of the main building. I didn’t see any waymarking for this and so, continued on towards the building with cars and people outside. 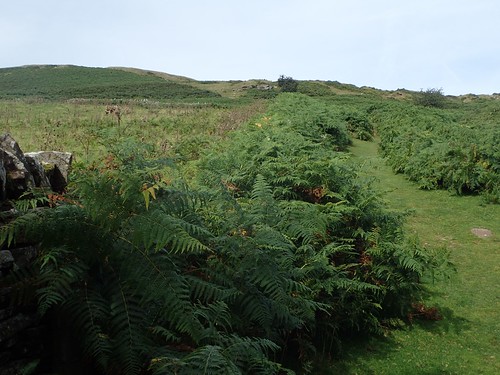 By the time I reached them, I’d already climbed 100m in a relatively short distance and with a 65lt rucksack on my back (this was a training exercise, in hope of walking The Ridgeway this year…). 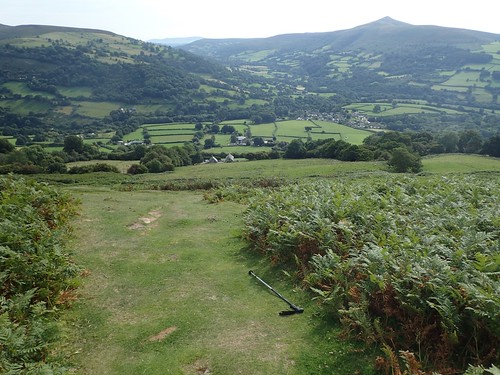 Another 50m higher and the summit of Table Mountain remained out of reach. Sweat was running down my face and, ahead, I could see an older gentleman. Had he thrown his walking pole away? I think that indicates just how severe this climb was! 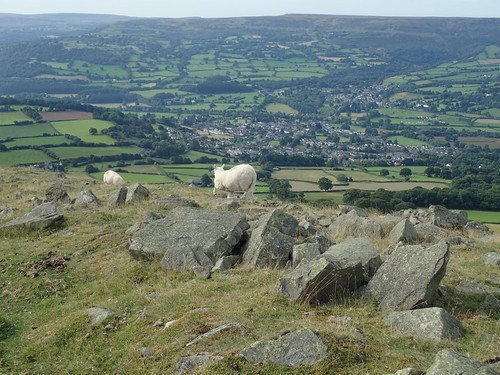 At around 430m above sea level, I did reach the hillfort summit of Table Mountain, also known as ‘Crug Hywel’ overlooking the town of Crickhowell. 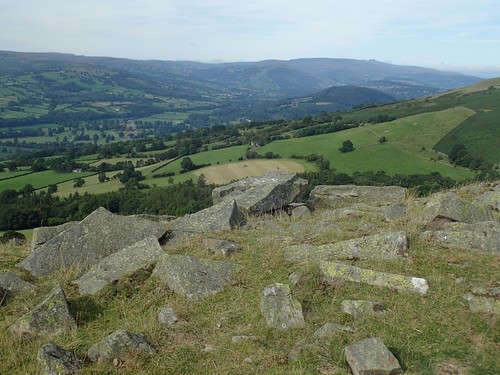 Table Mountain – part of the Brecon Beacons National Park – is one of three significant features visible from the Green Man Festival’s ‘Mountain Stage’ (I visited in August 2014), which is held at the Glan Usk Estate near Crickhowell each year. 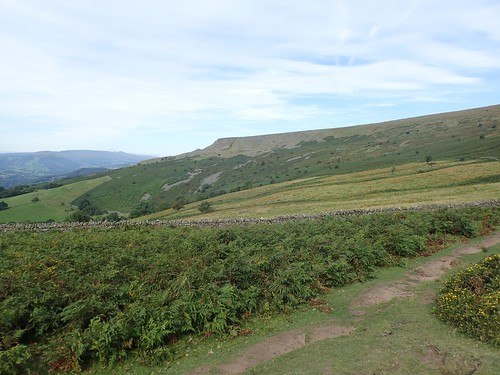 Two others include my next destination (Pen Cerrig-Calch) and to the west is a craggy peak named simply as ‘Darren’. But I wouldn’t be walking out to meet it. 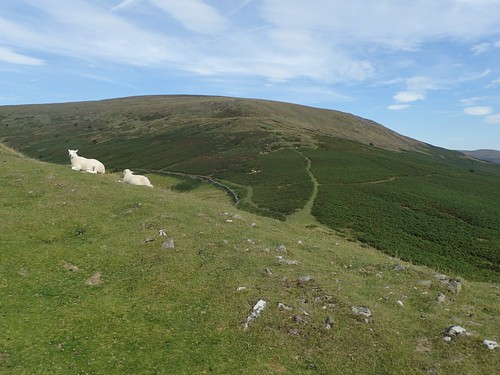 My route to the north was quite clear and the presence of Pen Cerrig-Calch, undeniable. 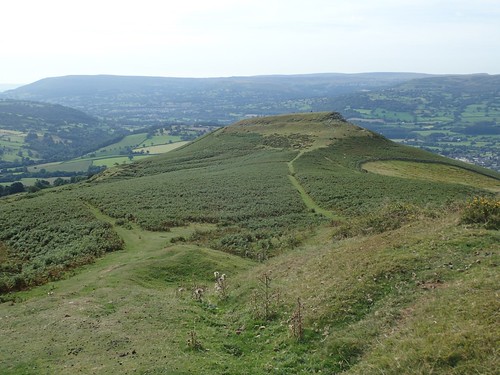 Looking back, you can see where Table Mountain gets its name from. I have an idea about leading a group walk at the time of the Green Man Festival, that visits each of these peaks, with eyes and ears open for the festival far below… Hopefully, in 2018. Although, I think group parking may still be an issue. 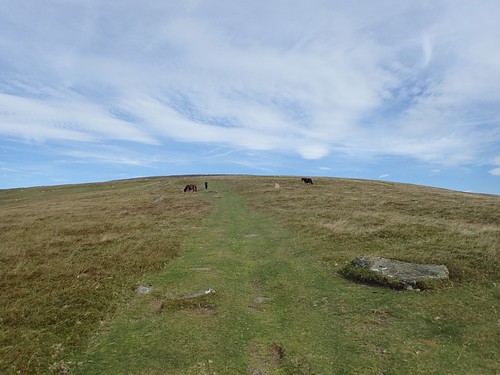 There’s a slight drop from 400m before climbing to the 700m true mountain-height of Pen Cerrig-Calch (I’m really not sure of how to correctly pronounce that). 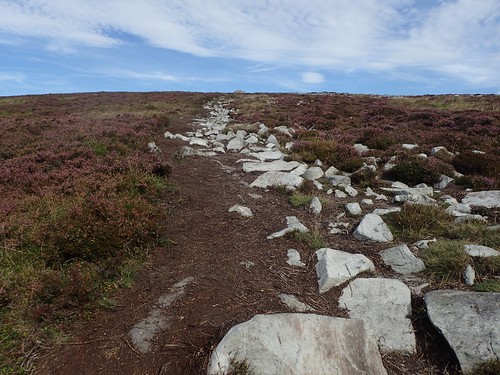 It was a long walk but one that followed quite a gradual ascent. Ahead of me, the landscape began to transform in to a moorland setting, with purple heather either side of the most obvious rock-laden path. 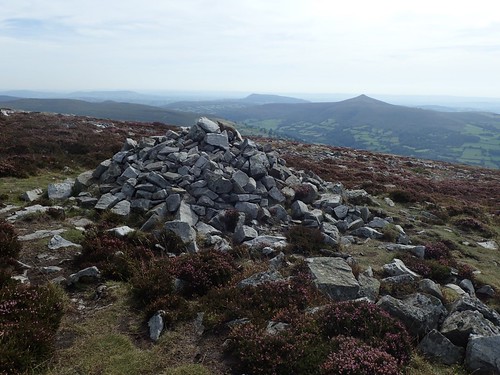 Sugar Loaf could be seen, away to my right (I still can’t remember whether its one of the Beacons or the Black Mountains but, it definitely falls short of mountain height). There was also the carcass of a fallen sheep. 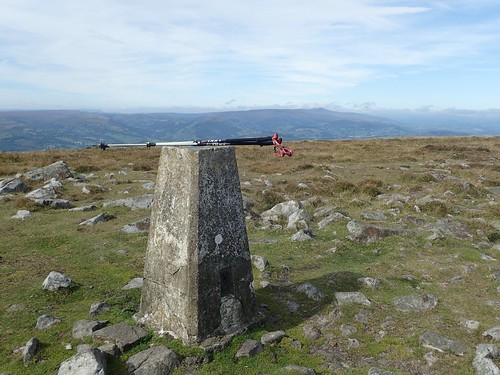 At 701m above sea level, I reached the summit of Pen Cerrig-Calch. Pen Y Fan and Corn Du could be seen, far to the west. It was windy although, a shelter to the north-west of the trig offered respite. 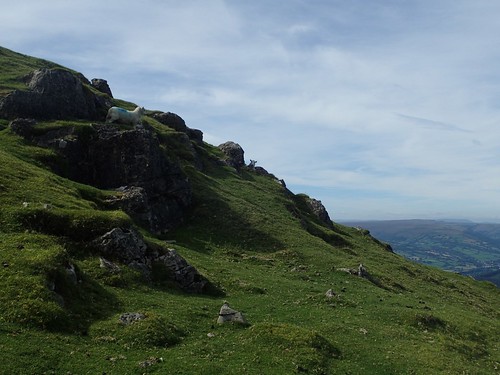 Best of all, there was nobody else around, to be seen or heard. I was quite surprised and also, pleased.

Between here and my next summit, I would effectively follow a ridge and lose the bare minimal of height above sea level. I’d forgotten to detour west for Pen Gloch-Y-Pibwr. 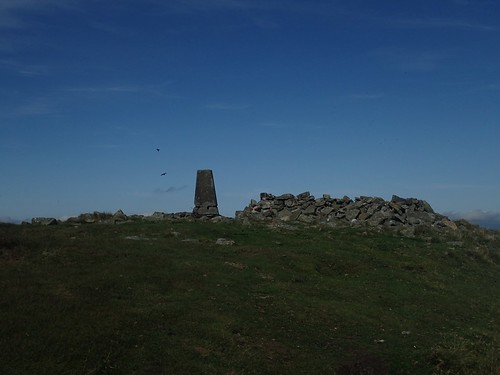 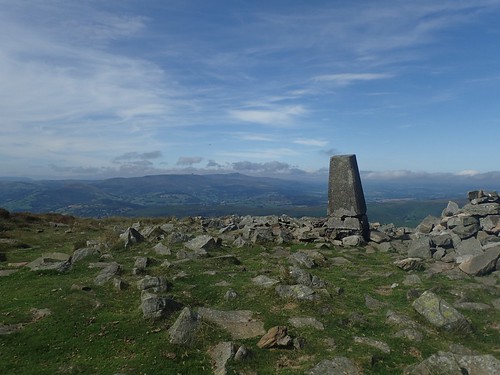 I like to think that I can pronounce ‘mawr’ as “mow-er” (think “power”, not lawnmower), in the same way that ‘fawr’ is “vow-er”. But the ‘ll’ in Allt… I feared that may mean scraping your throat to create an almost German word (acht).

I always remember this peak because a fellow YouTuber, who resides in Wales, was once criticised in the comments of his video for his incorrect pronunciation. 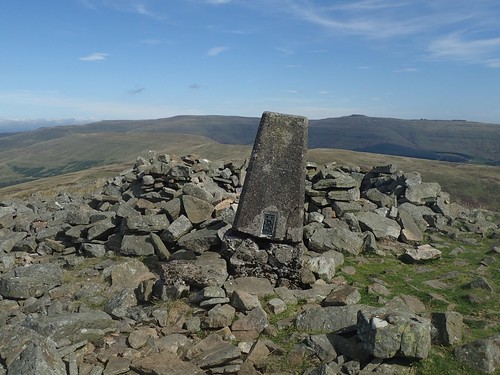 You’ll also notice that the concrete trig pillar is standing on a slant; its upper partially separating from what may remain of its concrete foundation. I’ve reported this to Ordnance Survey, only to find that it’s been logged several times since 2004, if I remember correctly.

Sadly, it seems like there isn’t a lot they could do and, if it does topple over, it’s unlikely to be repaired or replaced.

A sad thought. I appreciate these structures for navigational purposes but also, as a mark of our heritage. 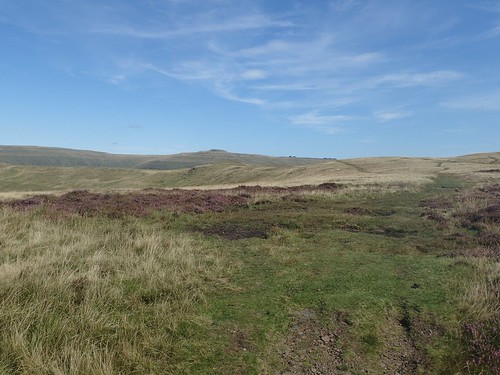 There was a steep and sudden drop of at least 50m, on the north side of the mountain. I was suddenly aware of two other hikers approaching from south. Should I linger, they would only soon arrive behind me!

To the north,  could see I was still a fair distance from Waun Fach – the highest point, which I was aiming to reach before lunch. I made an estimation that it would take me two hours to reach it.. Which would turn out to be quite accurate. 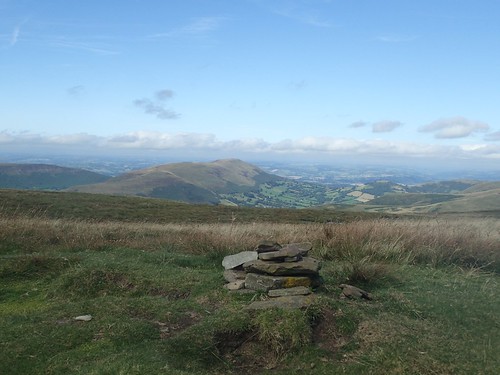 At the head of Cwm Banw, I found a pile of stones marking the summit of Pen Twyn Glas. 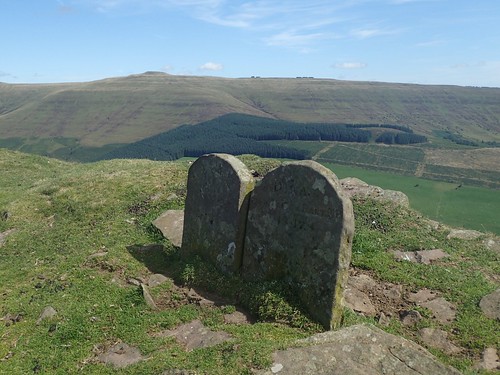 It was possibly just north of here, still following a ridgeline, that I found these two gravestones… I couldn’t clearly read the engravings but Google suggests they’re actually boundary stones… 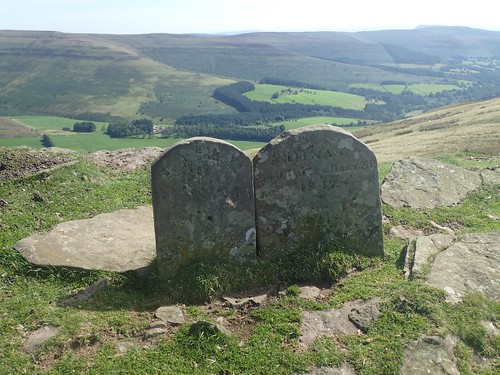 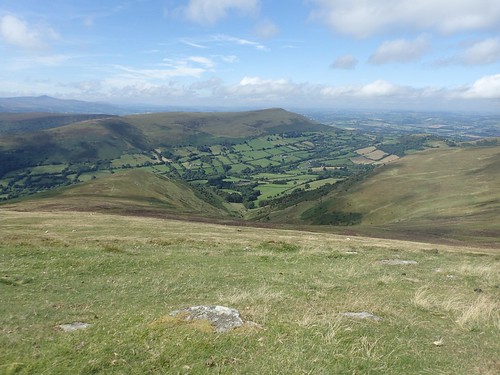 Walking further north towards Mynydd Llysiau, I could see Mynydd Troed, with Mynydd Llangorse just beyond – the latter of which, I can now say I’ve visited as part of my navigation skills weekend. 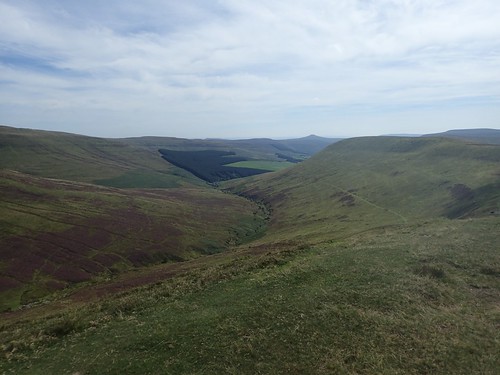 From the head of another valley, I was closing in on the highest point. I think I’ll end this post here, about 7 miles in to my walk.