I remember this weekend; a sense of urgency to walk, met with indecision on where to go and a reluctance to travel far from home! 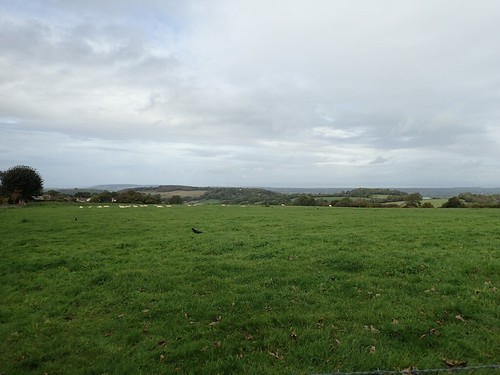 There must’ve been a shortage of walks on the group’s program as well. Because I did end up staying close to home and my walk began following a short drive down the A38 and in to Shipham.

While there’s no official car park in the village, there are numerous parking opportunities along the road that eventually descends in to Cheddar. Stay close to the pub and phone box and you won’t go far wrong. 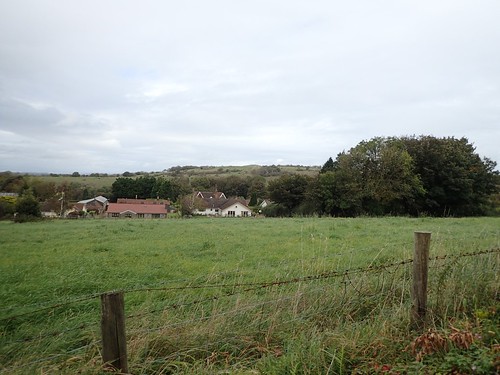 I began by walking to the east and in the direction of a better-known portion of the Mendip Hills. Even following the initial quiet country roads, I could achieve some pretty good views to the north. 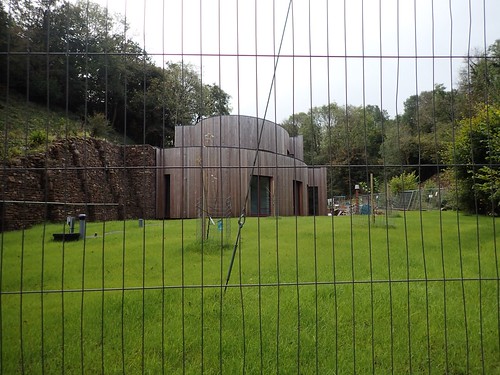 Looking now, I’m surprised that I cannot retrace my exact route. But I did make my way down to Rowberrow Bottom, where I passed a small building site with this very-Grand Designs installation under way (someone on Instagram recently told me it hasn’t progressed much in the two months since, which may suggest it’s a self-build).

In such a secluded and far-removed area, you might wonder how anyone could gain permission to build, here. There are more traditional houses a stone’s throw away, but still. 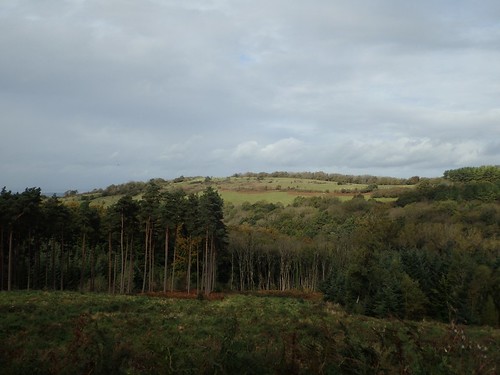 My sights were set on my next prize: Dolebury Warren; one of many former hillforts around the region and a personal favourite from the fifty-mile long range of the Mendip Hills. 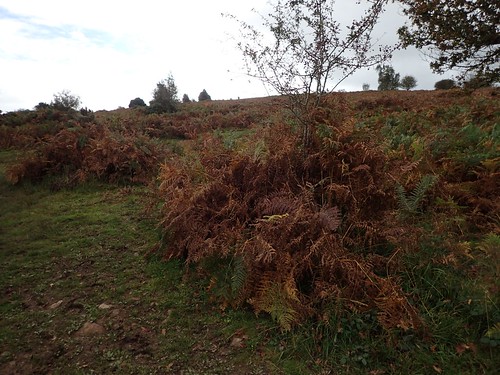 I walked east and parallel to the northern edge of Rowberrow Warren, until I broke out on to the familiar plain of Black Down. At this time of year (September), autumn was making its presence known from the bracken and beyond. 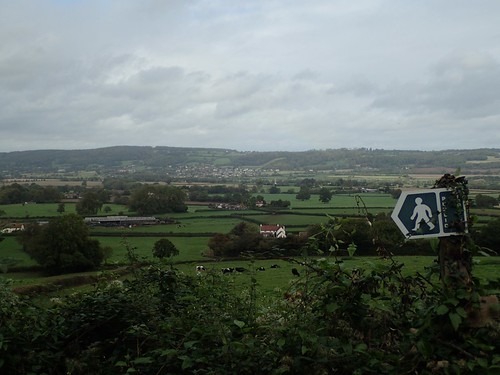 From here, I walked to the north and ended travelling too far along the wrong path. From Link Road, I took a path on the left (one I’d never followed before) that would guide me around the northern edge of Mendip Lodge Wood.

North of here, I could l see my current home village, Wrington. 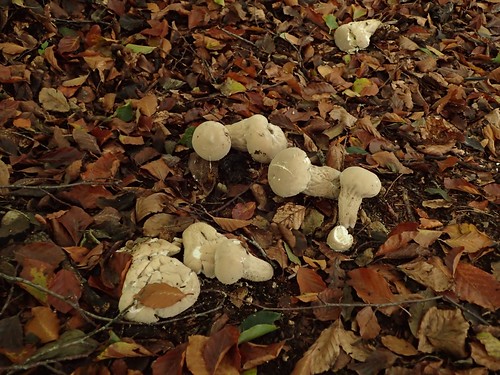 Fungus was beginning to flourish along this broad path. 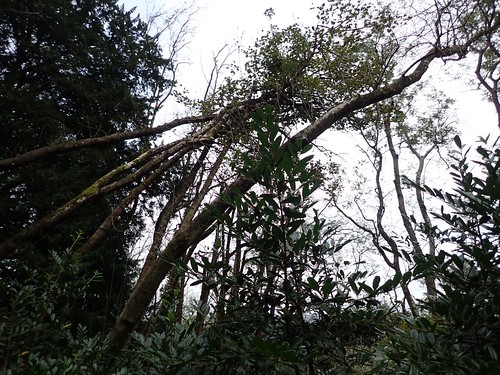 With leaves covering the ground and a lack of waymarking in places, it would’ve been easy to take a wrong turn and end up reaching either private land or a dead end and having to turn back… 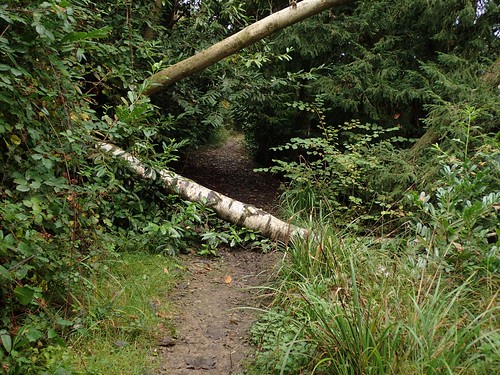 Which is exactly what I did, for a good five minutes each way! 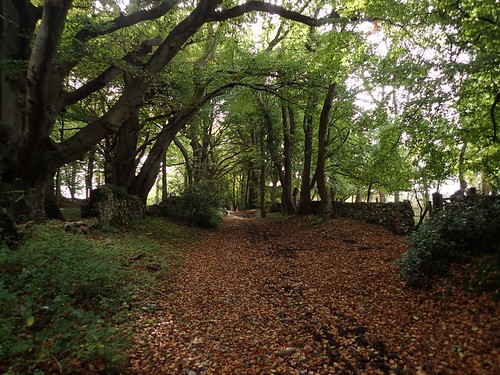 I passed a few small groups of dog walkers, headed in the opposite direction. They’re perhaps even more local than I am and, hopefully, do not suffer from issues of misdirection!

Dolebury Warren. My memory tells me it was beginning to rain lightly by this point. I don’t remember it being busy with people. I had thought about stopping here for a snack break.

I continued walking west, down and along Dolebury Bottom, to cross over and on to the Churchill side of the A38. 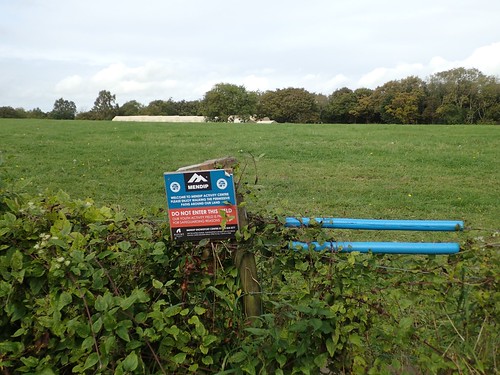 l was looking to join the Lyncombe Lane path and remember briefly meeting a young woman who was looking for her dog… I do hope they were reunited as this was awfully close to the A38.

As the rain began to fall heavily and I reached inside my backpack for my waterproof jacket, a four-wheeled drive car pulled up behind me… Hesitated and then reversed back out to return the way they had travelled.

SatNav users or looking for a truly “off road” shortcut?

I followed the lane across Lyncombe Hill. Just north of here is land owned and used by Mendip Snowsport Centre. There’s also a signed public right of way, directing welcome walkers to bring their muddy boots in to a nearby lodge for a drink. 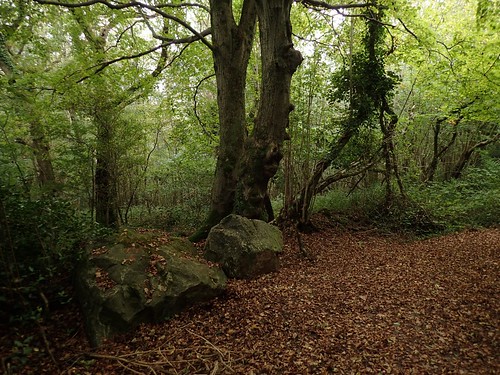 Further west along this lane, I would enter Sandford Wood. There are so many patches of woodland around the region and so much of it is open for the public to access, if only along designated rights of way.

Perched upon one of the large rocks, I had my lunch. 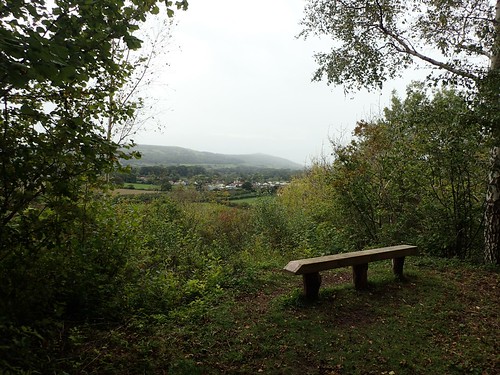 Had I walked just a little bit further, I could’ve occupied this bench, with views looking on to Wavering Down and Crook Peak. 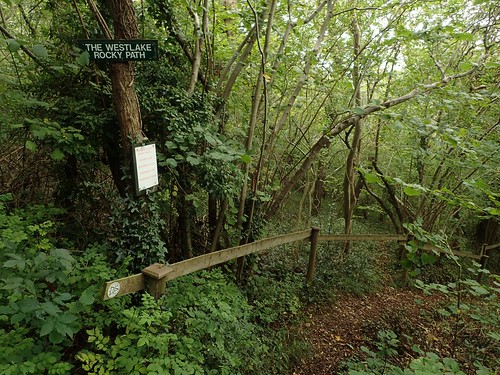 I wanted to leave the woods via a right of way to the south. I walked this way two, if not three years ago. Now, it appears to have been designated as the Westlake Rocky Path. 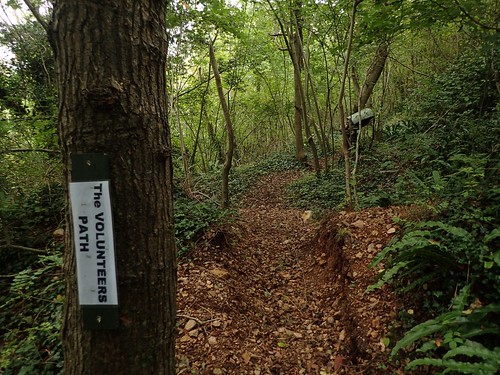 Off to the right was the Volunteer Path. 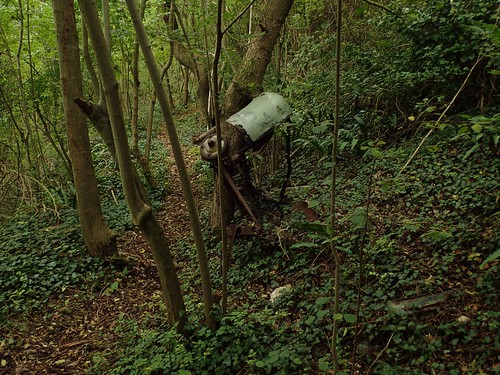 With some form of vehicle discarded and propped up against a tree. 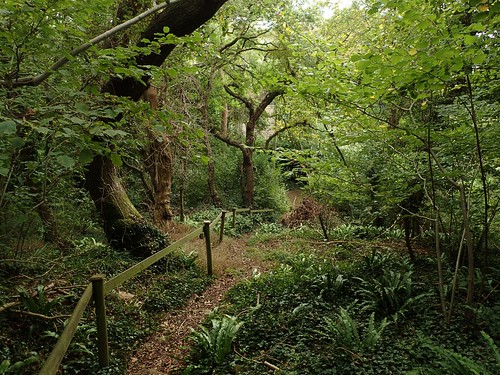 But the ‘rocky’ path was only marginally so. 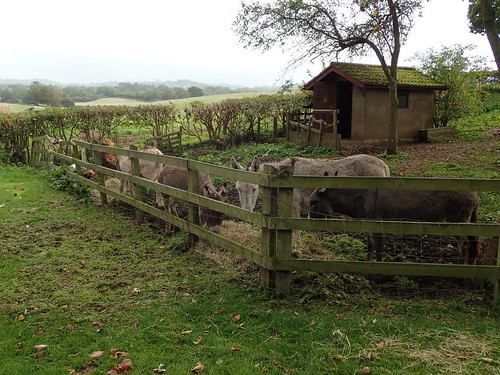 From here, I would follow the driveway of Uplands Cottages to reach a road. Last time I walked by here, there was a lone donkey; distressed and vying for some form of attention. I was pleased to see so many more of them and no signs of a frenzy or panic. 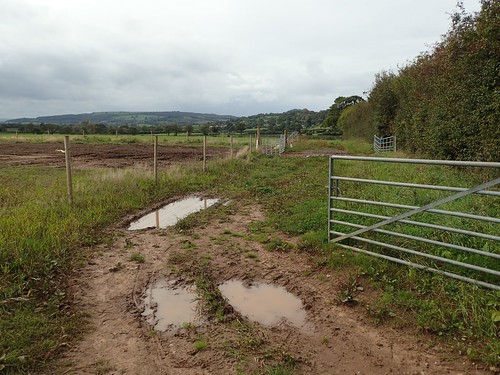 As I set off for this walk in the late morning, I had every intention of walking another couple of miles west of here to explore the caves near Banwell Plain… An area with no designated right of way but the caves are a sight I’ve yet to see anywhere but online. 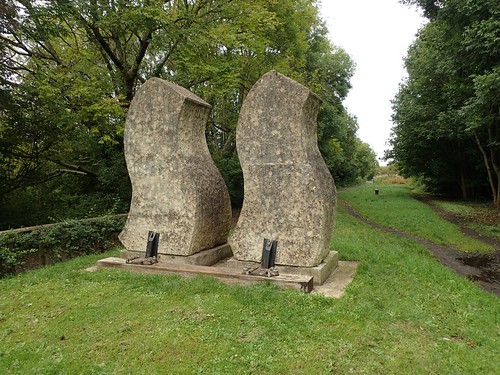 But, the rain was persisting, along with discomfort in my walking boots and I decided to press on southwards, now following the Strawberry Line. 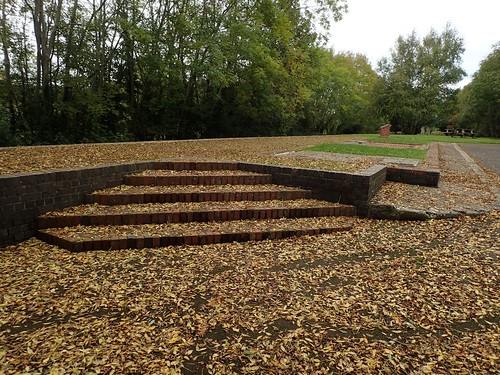 This is a cycle path running from Yatton in the north, down to Cheddar and it follows the line of what was once a portion of a railway. 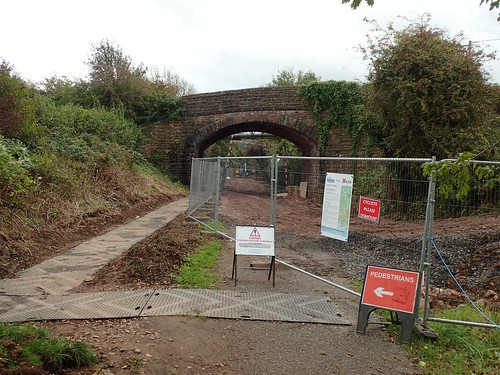 For the time being, a stretch of the Strawberry Line between Winscombe and the A38 remains closed, while Bristol Water carry out essential maintenance and improvement work. 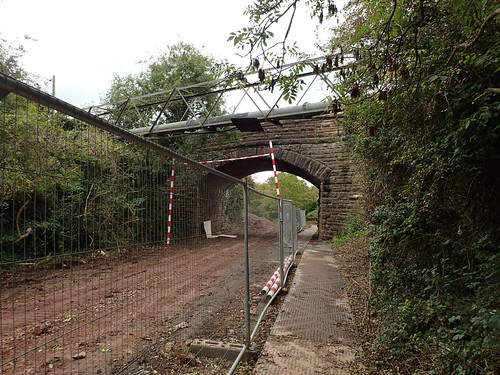 I believe this diversion will remain in place, in to the new year. 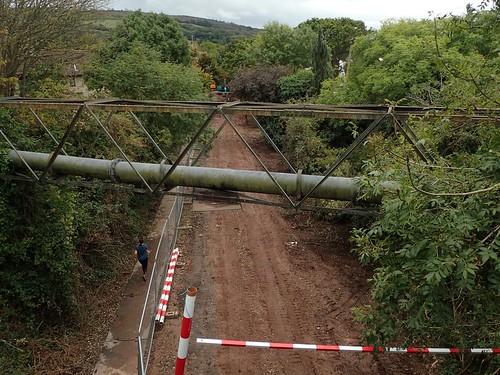 After passing beneath the road bridge, I found my way up on top of it and began walking east, now; passing the sports ground of Sidcot School and preparing to cross the A38. 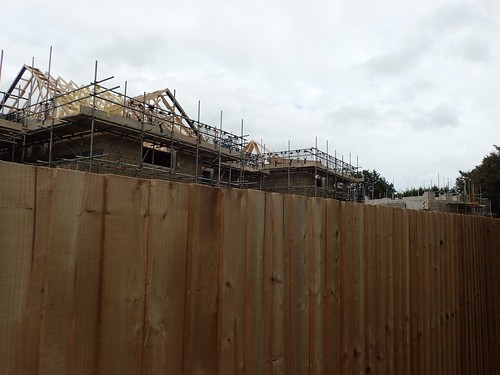 New houses are being built not far from Sidcot School. I never would’ve thought there was the space there to construct them but it is refreshing to this land used up in a favour of a large expanse of green (a number of which are already under threat across North Somerset). 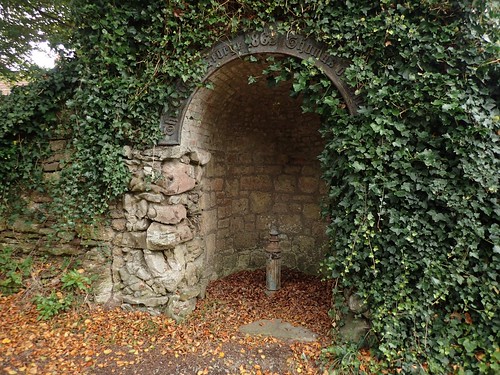 On the sign above, this says something about a ‘forge’, with the Christian name of ‘Thomas also given. Beyond that, I’ve not been able to find anything online. To me, it looks like the site of a former well. 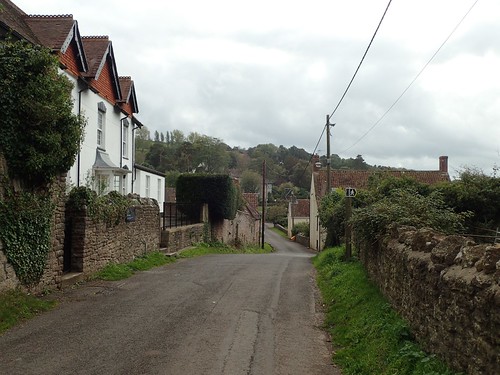 I would follow the road through Sidcot, soon to climb steeply uphill on my way past Oakridge Farm. 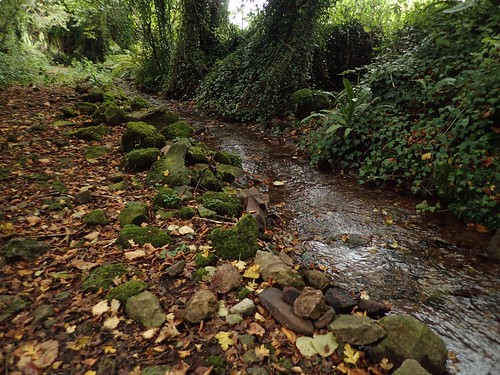 Shipham was only 1.5km away, ‘as the crow flies’. By now, the rain had thankfully passed over.

I remember trying to navigate my way diagonally across one field, only to find myself confused and uncertain, with a lack of waymarking and apparently new fencing installed. There were carved signs to suggest some form of a nature trail as well. 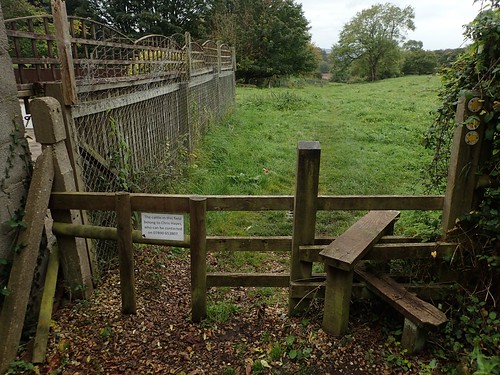 But I did reach Winscombe Drove and initially followed the ever-familiar West Mendip Way on my return, before turning north and then east from Winterhead Farm. New footpaths; fresh discovery.

A good day’s walking and not at all far from home.