On my return route to Oldbury-on-Severn in Gloucestershire, I explored the Vale of Berkeley and its deer park.

Having followed the Severn Way north as far as Berkeley Nuclear Power Station, I turned inland towards the village of Ham, in the beginning of the return journey to my car in Oldbury-on-Severn. 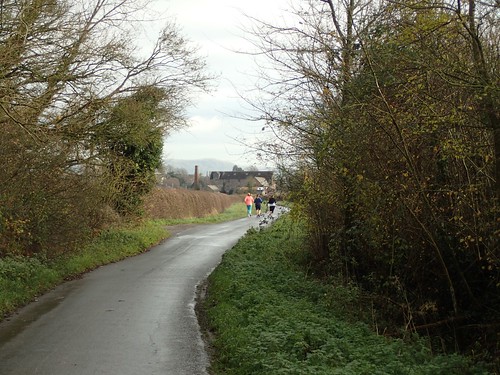 There’s actually a castle in Berkeley close by that I didn’t visit on this occassion but hope I may do in the future. 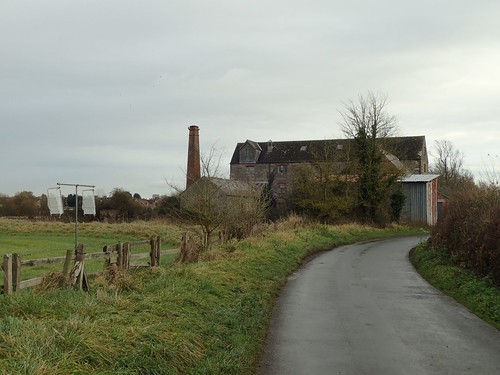 Walking the road of Hamfield Lane, I left the “danger zone” of the power station, as I passed a set of lampshades for the final time on this walk. 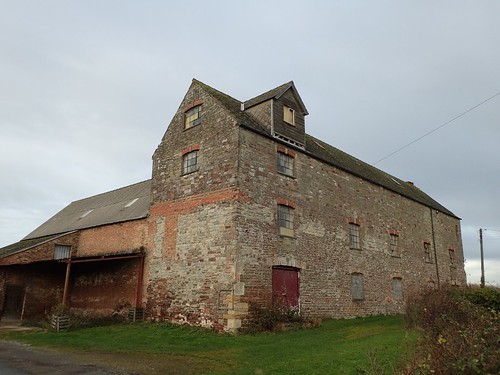 This farm building looked to be unused. Or, at least, neglected. 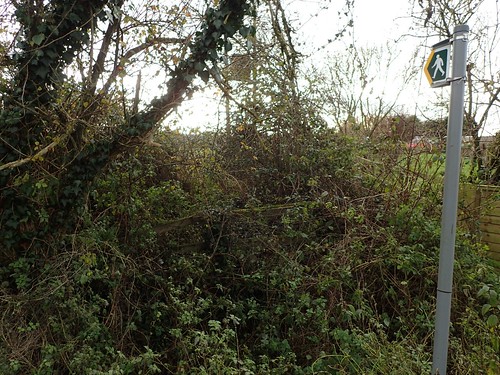 I was looking to take a right turn off of the road and across the field, when a tangled mess of bramblels prevented me from even clearly seeing the stile. I think I recorded this on the Ramblers’ Pathwatch App but I don’t believe I’ve reported it directly to the council. 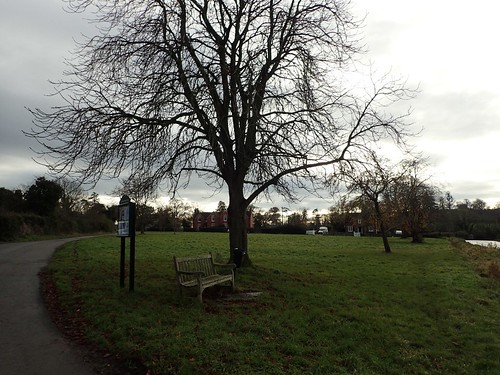 I felt the darkness looming, as I progressed through the village of Ham. Sticking to the road and those streaks of blue sky from the morning, now just a memory. 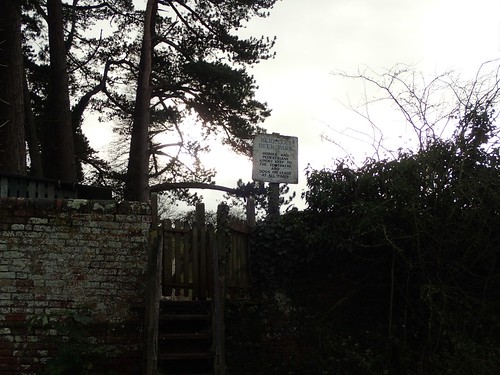 Heading uphill from a road junction, I followed a well-worn path up towards Berkeley Deer Park. Labelled as Whitcliff Park on the OS map. 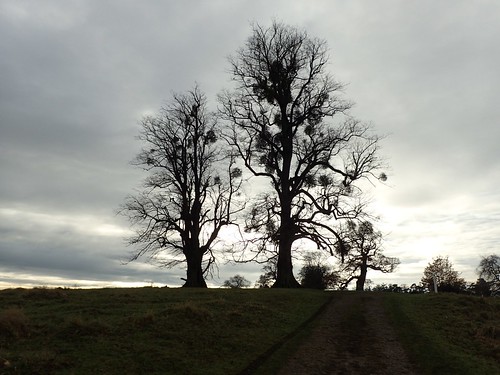 There were no doubts over the way forward, with the public right of way clearly marked and all other routes labelled as ‘closed’ or ‘private’, thanks to large unmissable boarding. 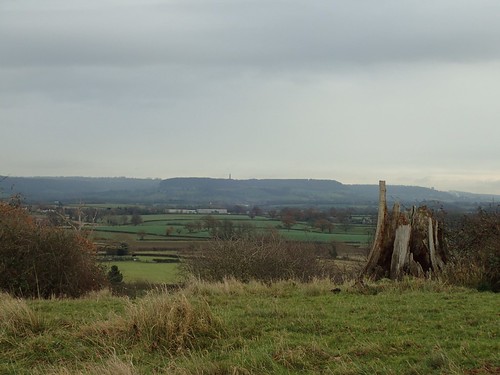 I found myself following a right. To the east, I could see the North Nibley Monument, standing over Wotton-under-Edge. 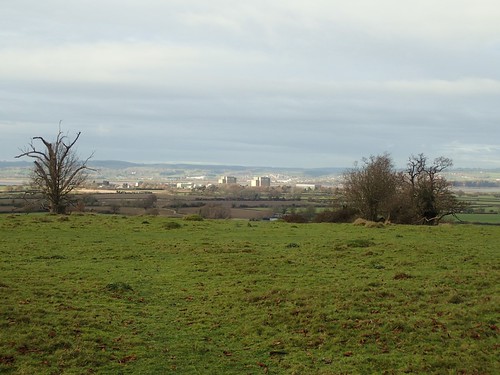 Away to my right, Berkeley Power Station. Closed for almost thirty-years and looking dated. 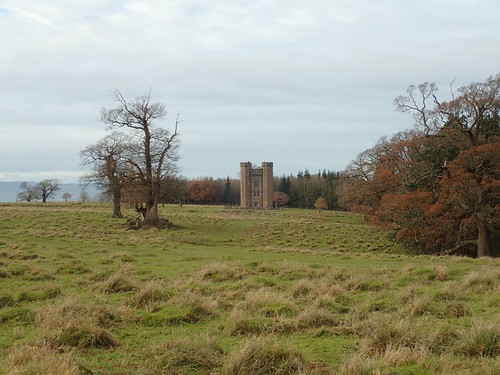 I’d see one other person up here and not a single deer. To the right, I could see a castle like tower beyond the private pathways. There was no authority around, as far as I could see or hear and, I did think about briefly wandering off for a close inspection and then, carefully treading my way back.

It’s on the map as Park House and is apparently a folly (ie. a fake, built for aesthetic and visual purposes, with no function). I thought it look familiar to the hunting retreat at Lyme Park in Cheshire and may’ve once been used as such in centuries gone by. It’s a shame that public access has been restricted in recent years but I can also understand the Berkeley Estate’s desire to protect the welfare of its deer. 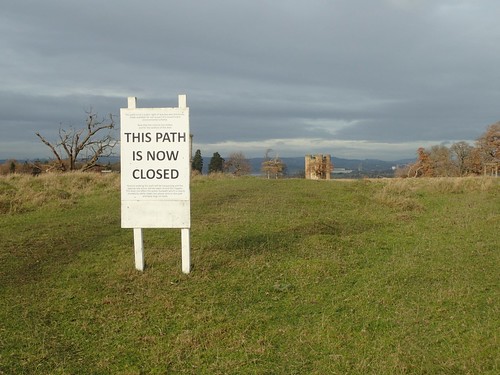 You may find this Trip Advisor review makes for interesting reading. 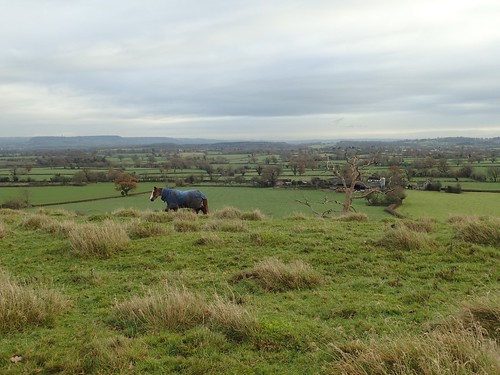 There were horses. Including hungry horses, immediately smelling the apple burried deep within my backpack. 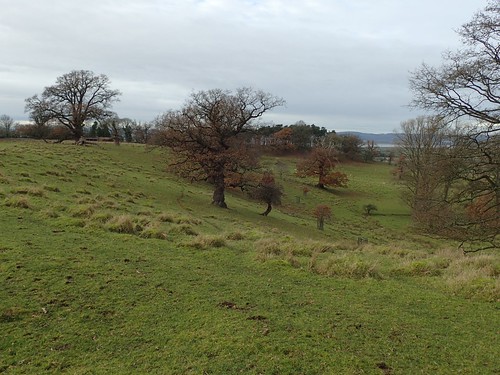 Most of the deer could be seen within the dip to the right. Close to the moat and just south of Comeley Farm.

I’d hoped to have my lunch up on the hill and the timing was about right. But, I didn’t feel entirely comfortable with the setting. Too many ‘footpath closed’ signs and hungry horses lurking nearby. A great space for a short walk, though. 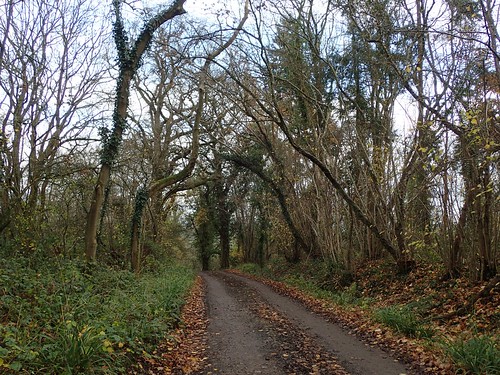 In a south-west direction, I left the deer park, passed Hystfield Farm and continued along the track towards the next farm. 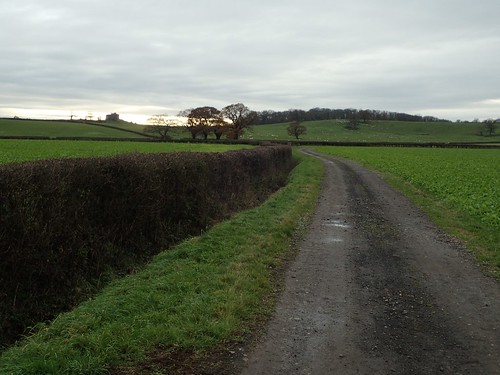 This was Newpark Farm. 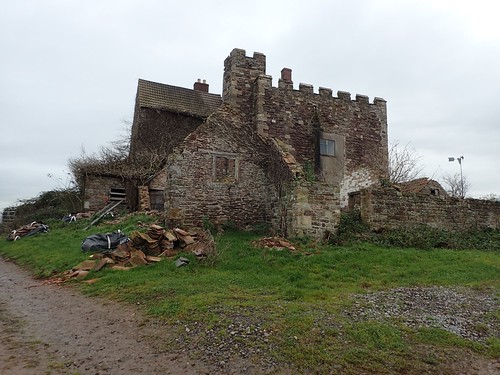 From a greater distance, I had mistaken this for Berkeley Castle! Passing closely beside it, I could see its true state of neglect. Much worse than the building I’d seen back in Ham. 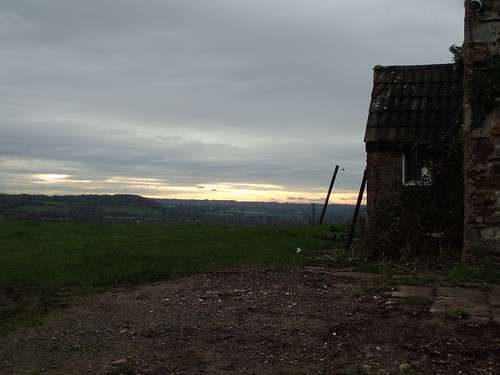 I felt like I still had a long way to walk. Looking far to the south from this vantage point, I saw what was probably a ‘false sunset’, where the sunlight had only found a way to break through the cloud. 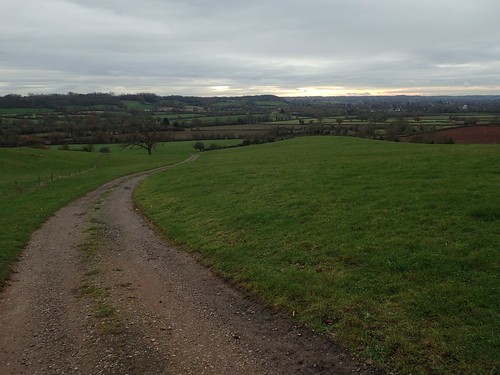 My intention now, was to leave the farm via the south-western corner of the bottom field. 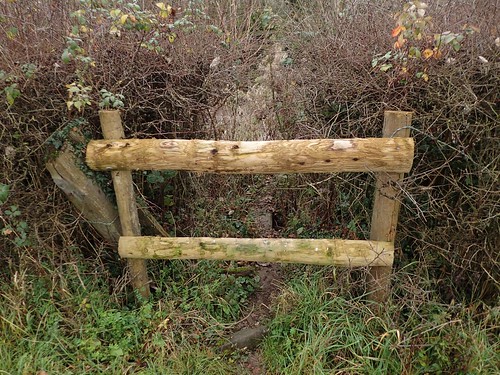 Unfortunately, the “stile” was difficult to climb and a mess of brambles were waiting for me, as I scrambled over. I was in no doubt about its location as the short bridge crossing the ditch could still be seen, along with another stile across the byway. 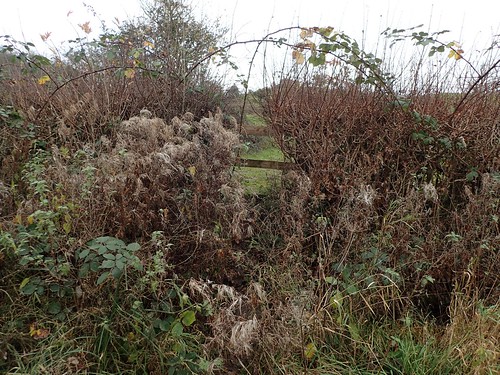 I definitely submitted this through Pathwatch but again, I need to inform the local authority. Some landowners seem to think they can do as they please. 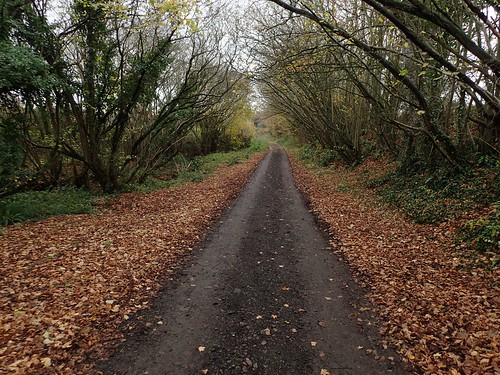 I followed Woodend Lane for what felt like a long mile, before turning south and on to Rockhampton village. 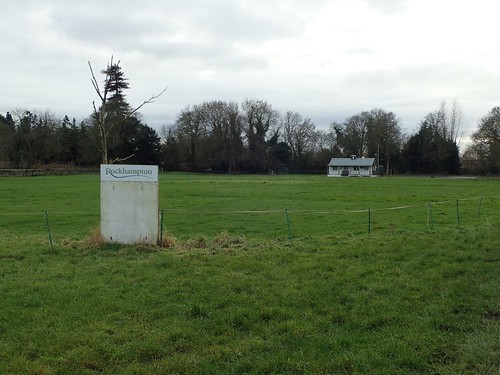 Outside the cricket pavillion, I had a selection of benches to choose from and with no-one else around. It may’ve been later in the day than I’d intended but, finally, it was time for lunch. 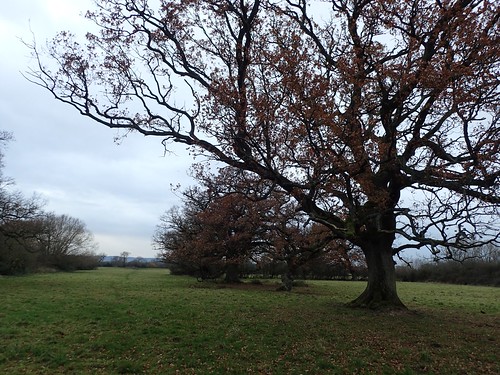 Afterward, I followed Northfield Lane; an unsigned, very muddy track that began next to a house. At its end, I was grateful to reach fields and leave the mud behind. 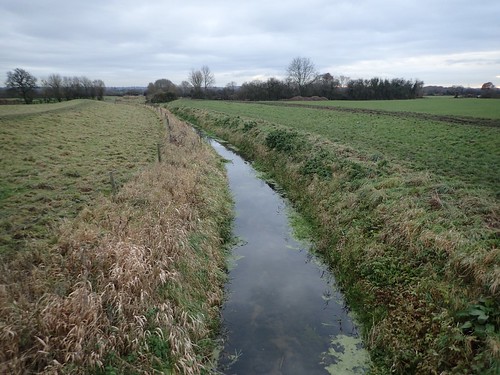 From here, I could cross and then follow the bank of Rockhampton Rhine (which I assume is the same as a rhyne), which would guide me to the north-eastern corner of Oldbury-on-Severn. 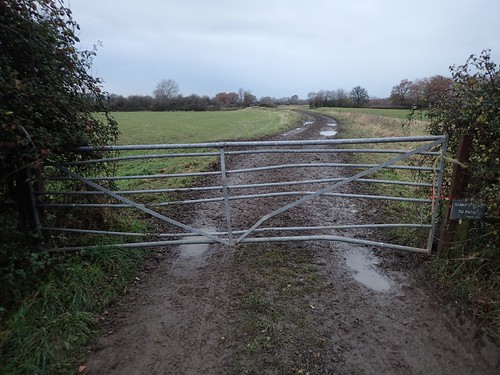 There was one gate along here, where the landowner had positioned a sign, asking for walkers to ‘remove’ the rope to open and pass through… I can never be bothered with having to untie them so, I climbed the spring-like structure, taking great care. 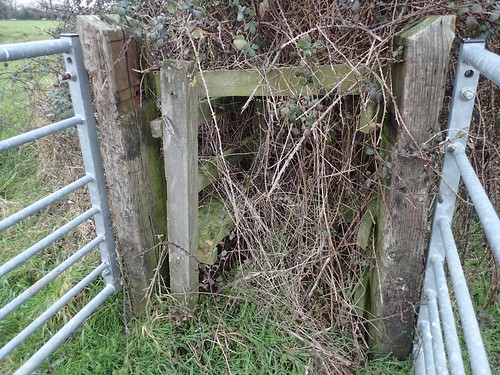 My final field boundary crossing before reaching the road involved climbing over a set of double gates. Clearly, it was once possible to access this double-stile. Another issue I’ve chosen to report. 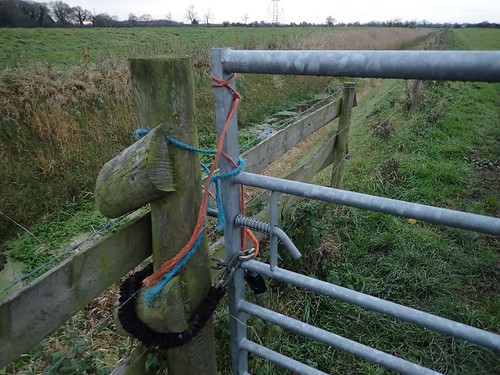 Climbing the field gate was the only option, as the selfish so-and-so had decided to lock the thing shut. Again, this has been noted. 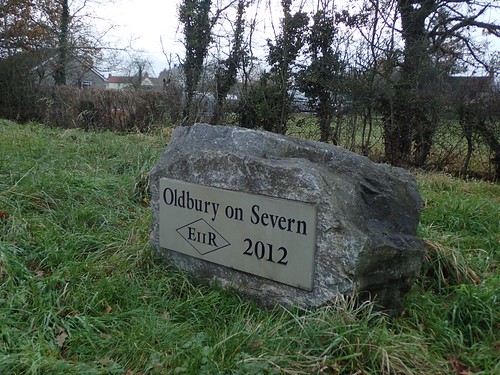 Feeling significantly tired and bearing the added weight of mud on my boots, I did at least make it back to my car before darkness. An enjoyable experience within spaces I’d not seen before. I also look forward to my next walk in this area, heading north along the Severn Way from Berkeley.

Total distance of the walk: 16 miles