Christmas Eve! Freeom from work for the ten days that would follow!

One day before the highlight of the week and I’d decided to head out for a walk on the Mendip Hills. This walk began in Priddy, which is only a thirty-minute drive from home. 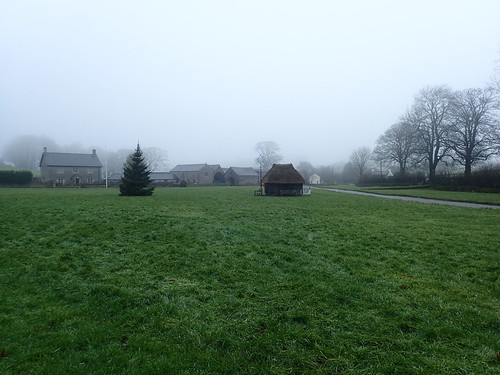 I was surprised to find no other cars parked on the gravel area before I arrived. This wasn’t the brightest of days, in terms of visibility but, I’d envisioned families heading out for a pre-Christmas walk. 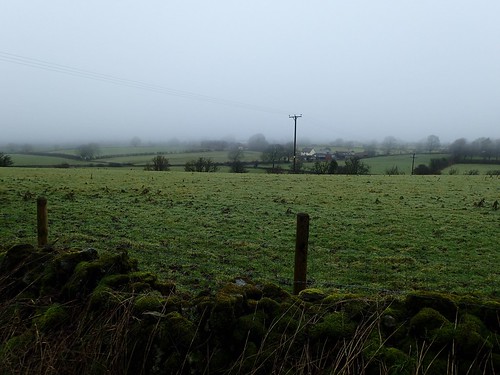 Walking west from the village green, I began by walk by following the West Mendip Way. 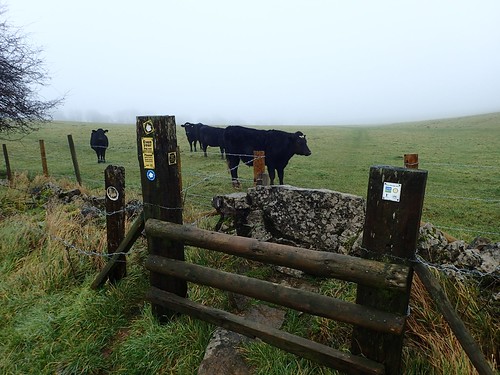 I was surprised to see these cows out grazing at this time of year. They didn’t seem to care much for me. Maybe they were too cold to moo? 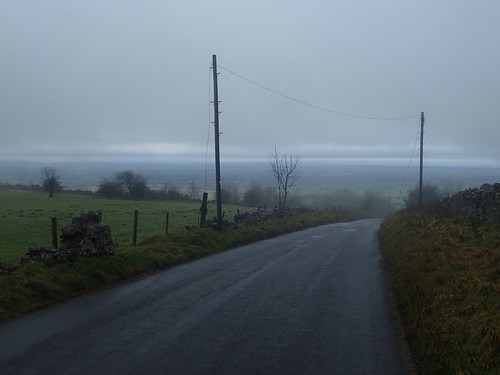 Leaving the West Mendip Way at the road junction, I would now turn south on a road that descends in to Rodney Stoke at the A371. 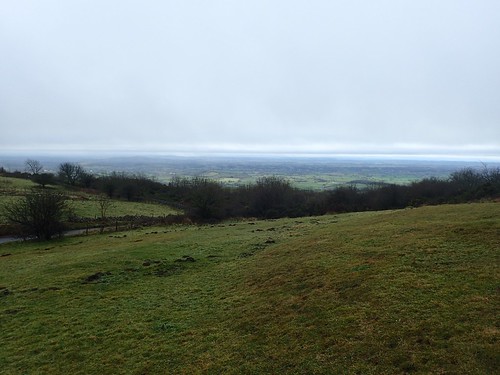 Barely a kilometre north-west of Deerleap, this is a special place for panoramic views over the Somerset Levels. I didn’t stay on the road for long and, across from a covered reservoir, I passed through a kissing gate and on to a field designated as Open Access Land.

It’s a shame there’s no sign or waymarking here to invite people in to this space, even though there’s no actual right of way. At the same time, I appreciate the near-solitude I can experience, here, having visited once before. 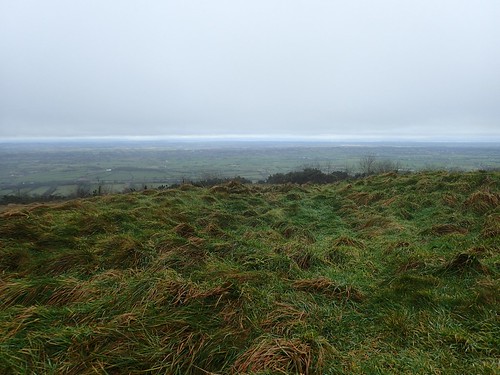 From binge-watching other peolple’s videos on YouTube, I’ve learnt that these horrible lumps of grass are commonly known as “baby’s heads”…

Thankfully, they don’t make a sound. 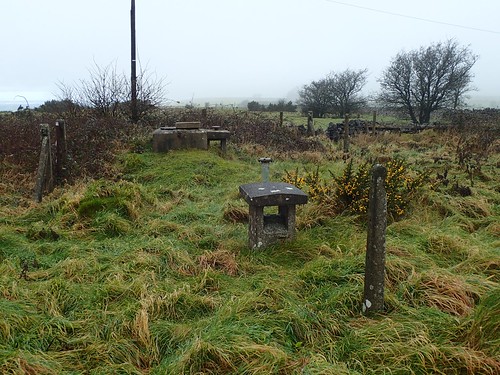 I was heading for the trig point at Westbury Beacon. Since my last visit, the footpath had been cleared. I don’t know what these man-made constructions were once used for. Had I taken more photographs, I could’ve asked for your suggestions. 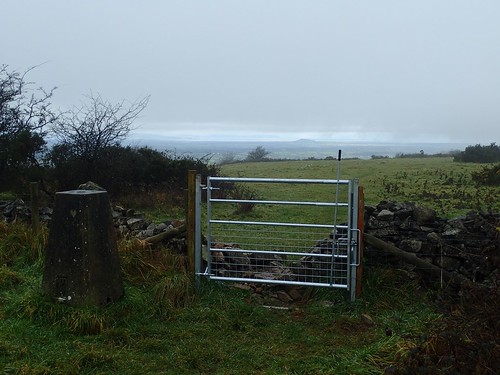 It must’ve been June 2016 when I last walked through here. I remember I had just purchased my Osprey Manta AG 28 backpack. Days after this walk i December 2017, I’d be browsing the internet for a larger pack!

That kissing gate looks new to me, while I do remember the gap in the dry-stone wall. 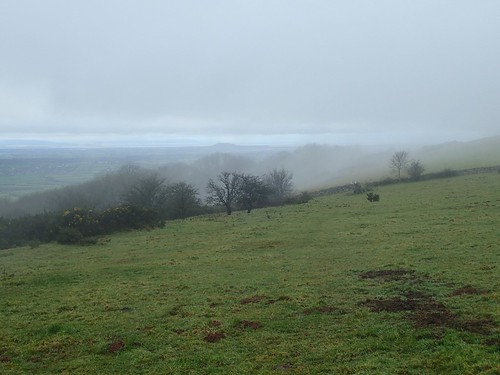 I continued walking west and above Rodney Stoke National Nature Reserve. Ahead of me, I could see the mist rise and climb up along the hillside. 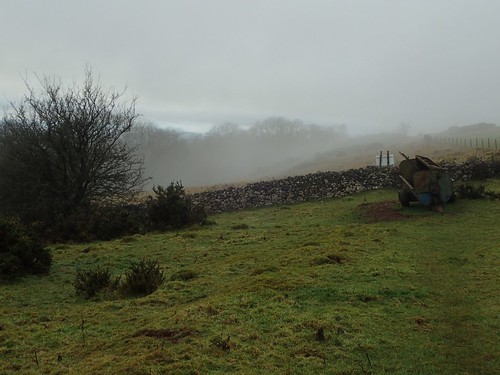 I would soon join an actual right of way that passes beside a marked settlement on the OS map. Feeling more confident in navigating, having completed a weekend skills course (and binge-wateched lots of Dartmoor videos on YouTube, I thought about breaking away from the trodden path to explore it for myself… 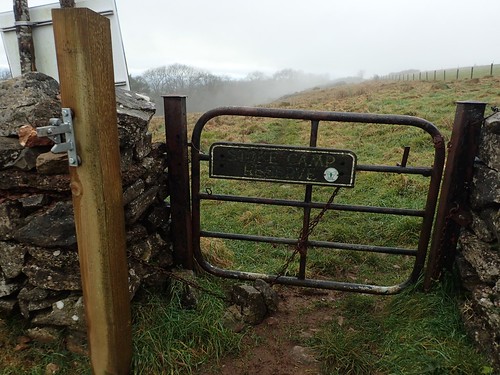 But, the ground wasn’t the easiest to tread over, it was on a slight incline and there was no obvious path, aside from what might’ve been the occasional sheep track. Maybe another time; maybe not. I’m happy to roam across access land but will avoid uneven ground where possible. 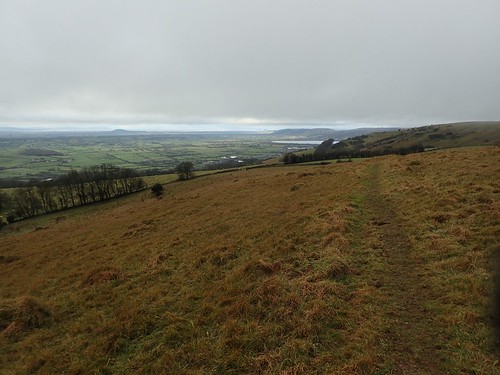 Walking en route to Draycott Sleights (another nature reserve) and a possible reuinion with the West Mendip Way, I could clearly see Cheddar Reservoir with Wavering Down and Crook Peak beyond.

In the coming years, I expect this view to change, as a second reservoir to the left (south) of the existing one is due to be constructed. I don’t think it will be a bad thing and it may open up further opportunities for walking. 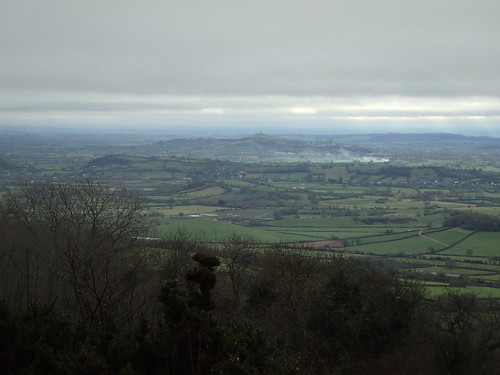 Far south of here, Glastonbury Tor stands prominent over the Levels. Thousands of years ago, this would’ve been an island. 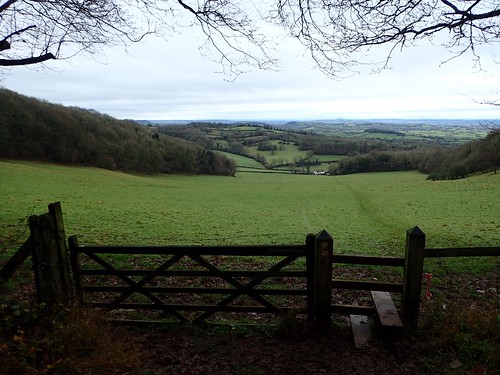 After admiring these views for a moment, I would turn south to enter Rodney Stoke Nature Reserve. On older OS maps, I believe it’s referred to as ‘Stoke Wood’ or similar. Either way, it involves a steep descent through woodland (slippery when wet). After passing through this gate, I took advantage of a bench available to the right, as one man and his dog struggled up from far below.

Actually, the dog made it up and back down again three times before its owner caught up! 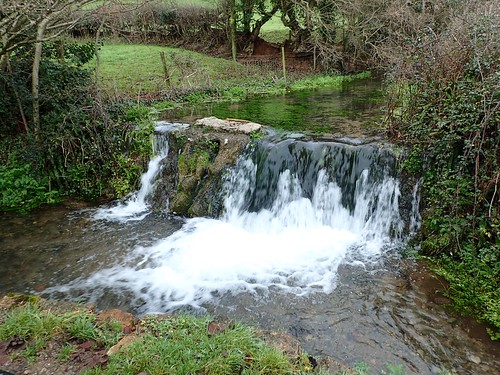 This led me to Rodney Stoke, where an even more appealing bench is available opposite this small but thunderous waterfall. 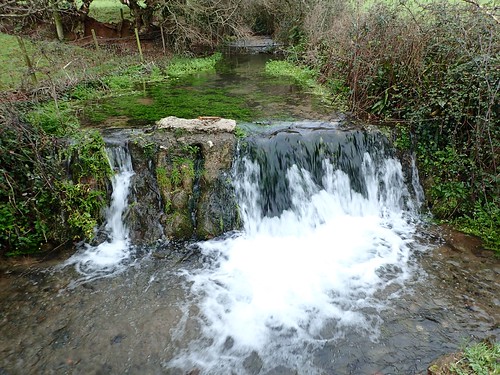 I’ve visited before but I really don’t believe this is very well-known. I imagine most people would need an OS map to find it.  I wanted to test the waterproof capabilities of my Wonnie action camera but the stretch across water was too far for me to reach with comfort. 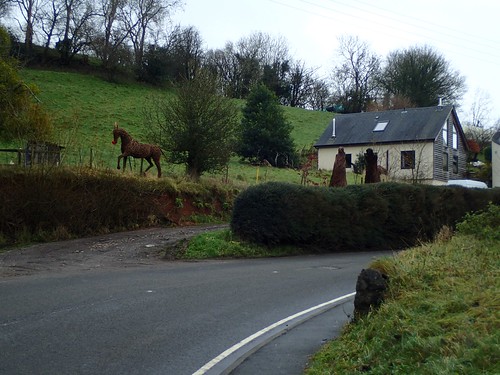 As I reached the A371, I decided to follow it in a south-eastward direction. Initially, there was a pavement and views to the willow sculptures across the road to my left – one of which had been designated the Rudolph of the set!

Then, there was none. Climbing uphill, I had to step aside and dodge oncoming vehicles (its a busy stretch of road). A more sensible option would’ve been to cross and use the minor roads that surround Conduit Farm. I don’t think it would’ve taken any longer. 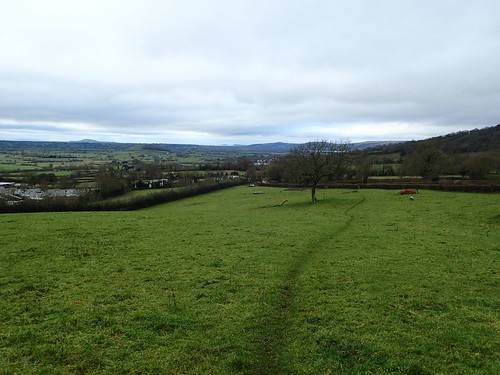 Next, I began climbing Westfield Lane; away from the A-road and soon to follow a right of way heading parallel towards Westbury-sub-Mendip. 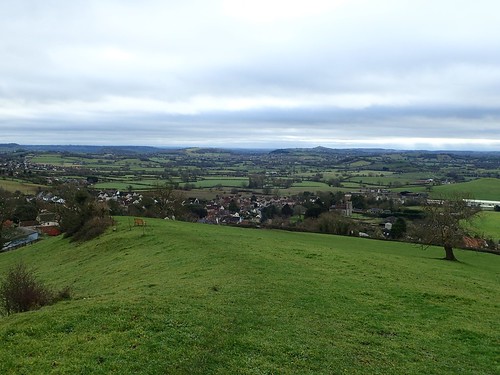 Another bench, with the opportunity for further excellent views. I had a chance to complete my walk before lunchtime and decided to press on. 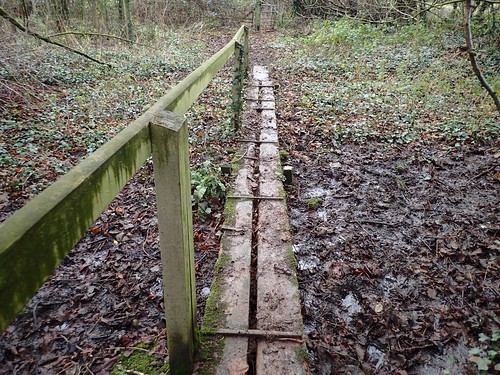 I mistakenly left Lynchcombe Lane too soon and began following a series of paths that were unfamiliar to me. At the same time, I found peace away from other walkers, with only sheep for company. It was just as steep as any other option, I reckon. 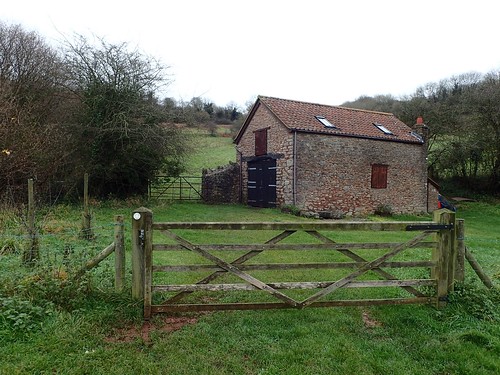 As I joined Lynchcombe Nature Reserve, I would pass this isolated building. A storage barn of some sort. Machinery and tools for keeping the vegetation down? Doors, roofing tiles and brickwork all appeared to be in good condition.

Too often, this kind of site would be found in a neglected state of ruin and delapidation. 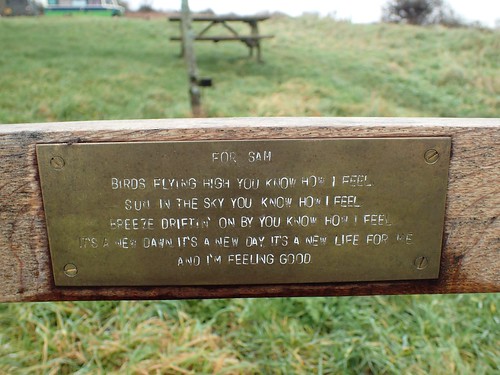 I would soon find my way to the familiar car park and picnic site just east of here and next to Pelting Drove; a route running from Priddy and down to Wookey Hole via Ebbor Gorge. 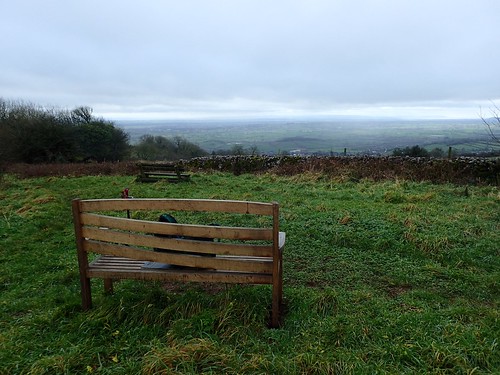 This inscription was on the bench you see above, with the oddly slanted backrest slats. Even as a furniture maker myself, I do not understand this and my eyes find it quite unpleasant, ahead of the landscape views.

I had my lunch here until the rain began to fall. I also filmed a ten-minute timelapse with my Wonnie camera, that you may have seen elsewhere. 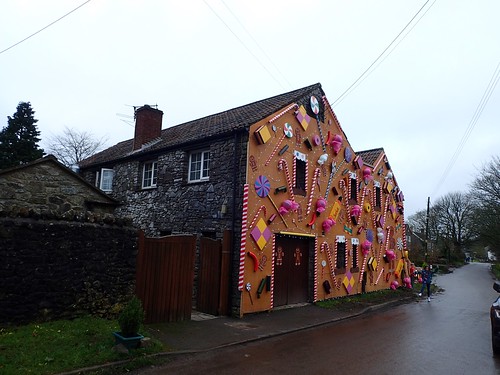 Two kilometres up the road and I’d return to my car. Along the way, I’d take in my final intended feature of this walk: The Gingerbread Inn that I had seen spread across social media. 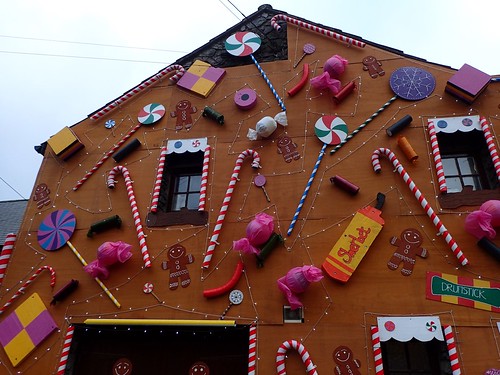 This pub is ordanarily known as the Queen Victoria Inn and, as the last remaining pub in the centre of Priddy, it can be busy on almost any weekend of the year. 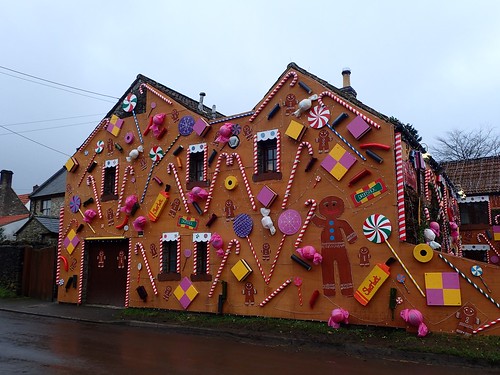 I thought they’d made an incredible effort with their decorations this year. I found it quite refreshing to witness a ‘less festive’ celebration of the season. I regret that I didn’t return in an evening to photograph it with the lights on, as I’m sure it’s reverted back to its original state by now. 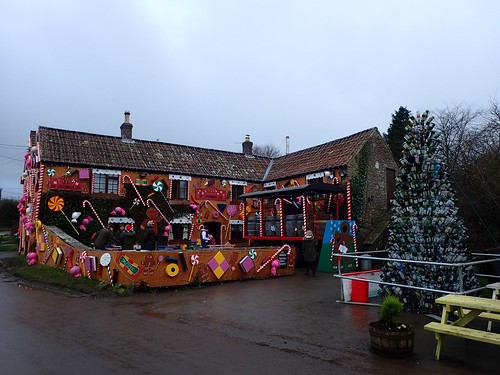 A great ploy for business and trade, I’m sure. That Christmas Tree is made from empty wine bottles. Inside, they had a vintage sweet shop (I only realised this after seeing someone’s video on Instagram).

Quite a special end to a rewarding walk not a million miles from home.