A January walk around Wrington and Redhill in North Somerset. My aim was to establish a route that I can use for walk leading with a Brunel Walking Group.

We’re in to March, at the time of writing and I’ve managed to absently bypass this local outing from almost two-months earlier.

I’m going to be leading a walk in early April that starts in Wrington. I’ve been living in this village for over four-years now and have always had it in mind to do this… I’m currently in the position of looking to move (in the hope of finding a brighter and warmer flat) and feel a sense of urgency to get this ticked off the list.

There are a number of long-distance footpaths running close to my local area and one of my favourites, by far, is the Two Rivers Way. It’s only twenty-miles long but not relatively well known and, in many sections, you will rarely pass another human soul. 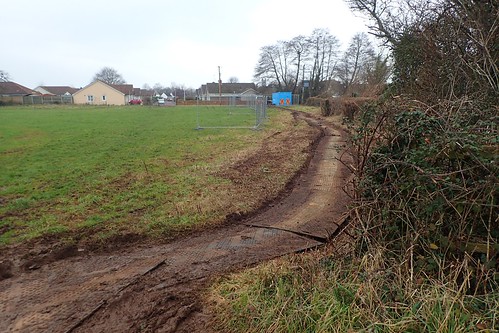 With that in mind for the start of my outbound route, I picked up the familiar trail from Silver Street… Only to find the interruption of construction work within the very first field. 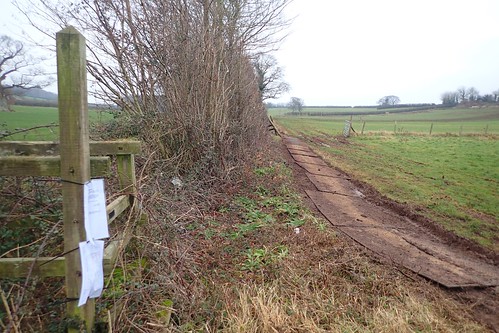 I never find these council notices to be very clear. They appear to have been written in a language that doesn’t translate clearly for people who actually use the right of way networks! I was able to decipher that the path I’d intended to follow was temporarily closed… There was a suggestion it could last several months but I’m pleased to say that it has reopened since I did this walk.

From the hideously-overgrown and redundant footbridge crossing the stream, I walked north along a valid path, climbed up the bridleway of Old Hill and then east beyond Meeting House Farm. 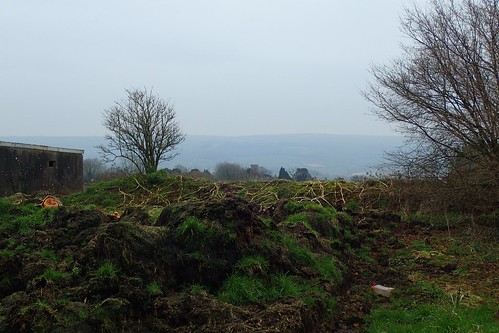 Beyond Cottage Farm, I would continue east to reach the A38, on a stretch of path that I had never walked before. You can also just see the church in Redhill, above. 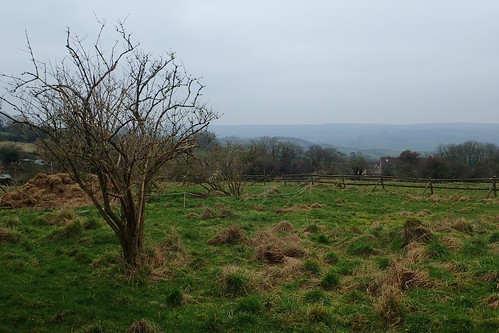 Effectively, I was now walking my intended route but in reverse. There was nothing much that I could fault it for. There’s supposed to be a long barrow on private land north-east of here (I’m probably facing away from it, in the photo above) but I didn’t even stop to look for it. 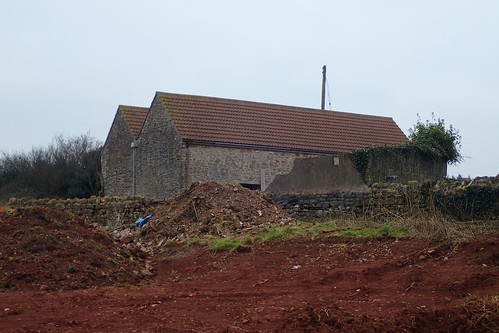 Safely over the A38 and I continued to trek along this unfamiliar series of paths, continuing eastward. 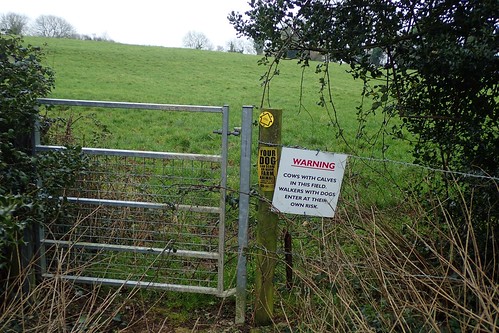 In late 2016, I encountered an identical sign in a location only a couple of miles south-east of here. I was aware that terms such as ‘Dog owners enter at their own risk’ are not appropriate and so reported it to North Somerset Council (it’s since been removed, as you’ll see lower down).

While guidance is freely available online for what messages a landowner should and should not portray; somebody, somewhere, manufactured this board… Presumably, they’ll continue to do so. 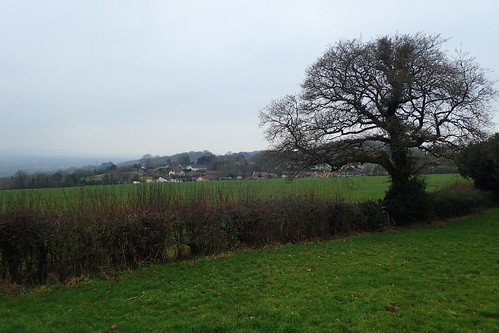 Moving on from Redhill, there’s supposed to be a Pillow Mound visible (I presume it’s like a long barrow) although, despite looking, I did not recognise it. 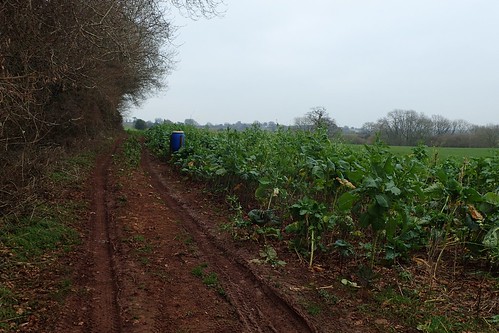 In the next field, I began by following the obvious vehicle track, which can often be an indication of the right of way where no signposting is available. 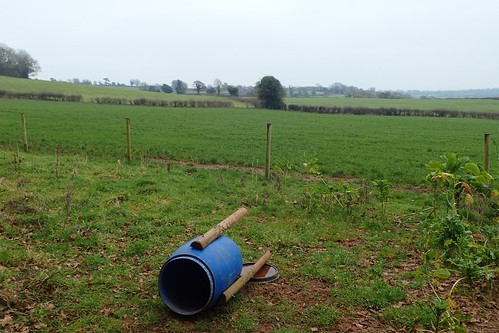 Unfortunately, I was now trapped on the wrong side of a barbed wire fence, despite legally following the right of way, as I interpreted it. The water butt thought it was hilarious.

It’s legs were pointing towards the desired stile. A bit further on, I was able to cross another stile in the fence and make my way over. Next time, I’ll know to bypass it. 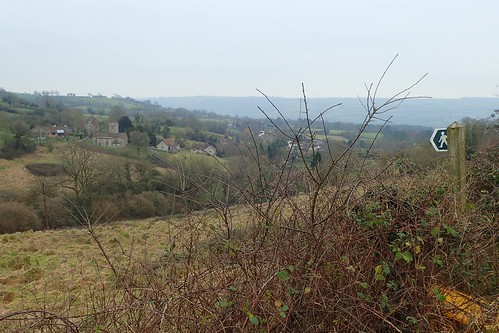 An ancient settlement was once formed close by, while I was destined to follow a path towards Rustin Farm. From there, I could join the road and follow it south towards Butcombe. With this view, overlooking the village church and valley before it, I had rejoined the Two Rivers Way. From here, my intention was to begin heading west and back towards Wrington. 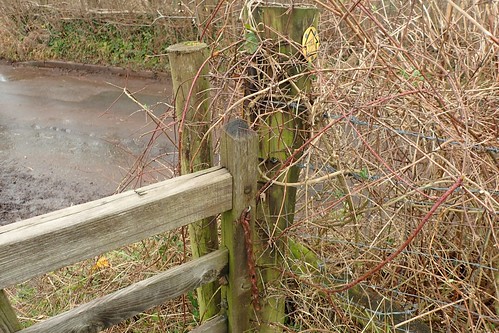 On the other side of the road was another access incident that I had reported in 2016. This gain was chained shut, meaning it could only be climbed. I’m pleased to be able to say now that the chain has been cut. 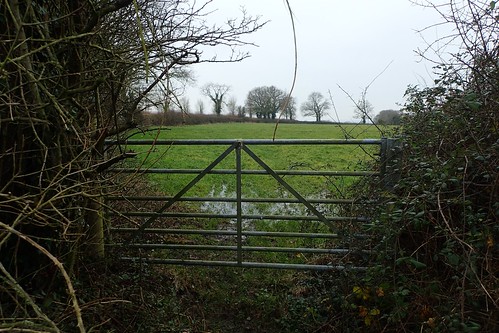 It was at this gate on Sutton Lane, where an identical sign to the one I showed you earlier, used to be situated. But, thanks to my efforts and the work of the local council, it has been removed. 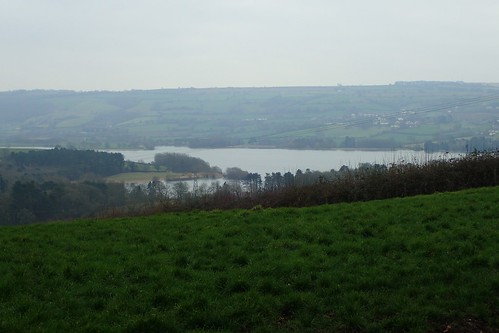 From this point, I would leave the Two Rivers Way for the final time and continue south along the Sutton Lane bridleway. Towards the bottom, I could clearly see Blagdon Lake. 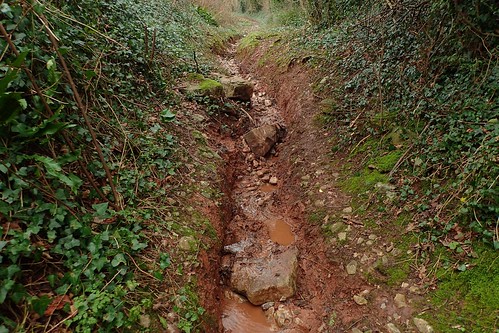 I could’ve walked further towards the lake but felt it would’ve been too much of a diversion. This walk was largely to do with establishing a circular route and making an efficient return home before the daylight would fade. Sutton Lane is well weathered and not very enticing for the average walker. 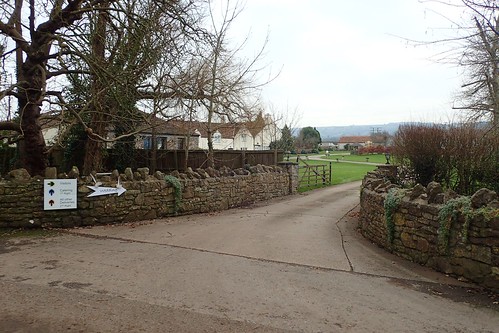 Walking west along the road now, I’d pass the entrance to Aldwick Court. A site reserved for weddings and corporate events, with a public right of way following its driveway. I’ll try to explore that another time. 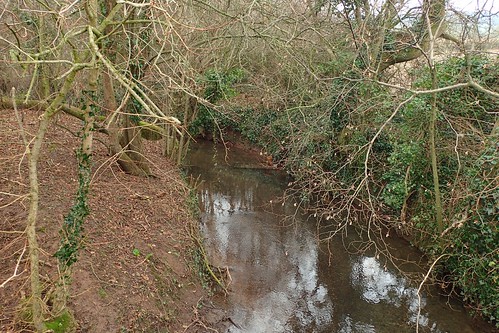 From Emley Lane, I would cross the River Yeo (Congresbury Yeo), which flows in to Blagdon Lake from its rise at Compton Martin. The Two Rivers Way path is supposed to follow this one, aside from the fact it’s almost 1.5km north of this point. 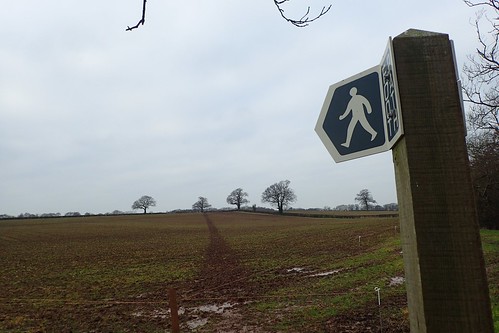 This first field was a challenge. It looks as though the farmer has attempted to fence-off a route running clockwise around the edge of the field, while the right of way runs straight across it.

I took the most direct and legal route, which also happened to be incredibly muddy. One of those experiences where you end up attracting so much mud that you find you’ve grown a couple of inches by the time you reach the far side. 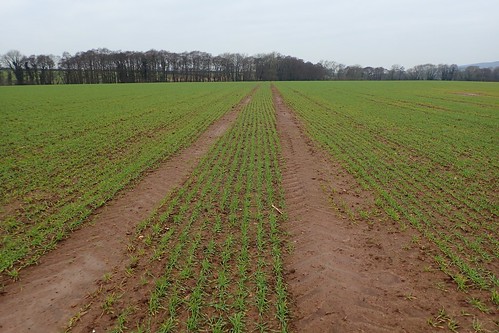 In the next field, I tried to follow the vehicle tracks as best as I could, in the absence of waymarking. I found my way using basic navigation skills. I’ve no idea what grows in this field but I can imagine it exceeding head-height during the summer. 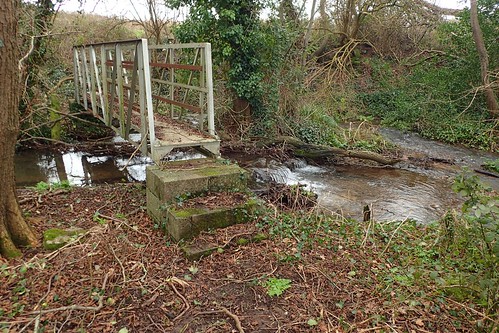 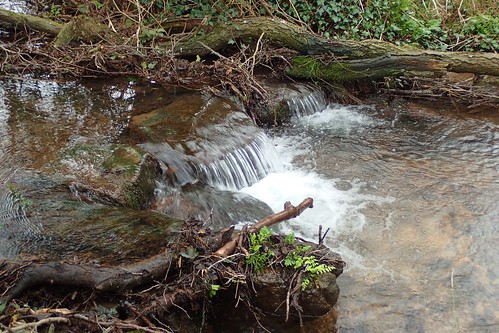 This might be a tributary of the Yeo, connecting with the beautiful pools and springs of Rickford to the south. 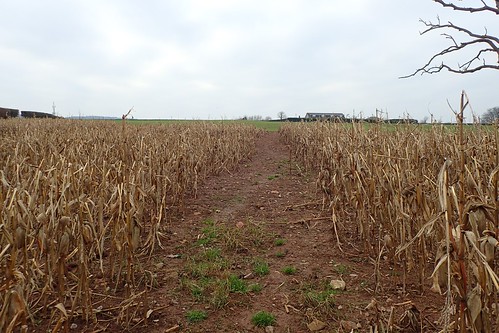 Over the bridge and one final field would lead me to Ashey Lane and then the A38. How reassuring, to find the footpath cleared through the crops. 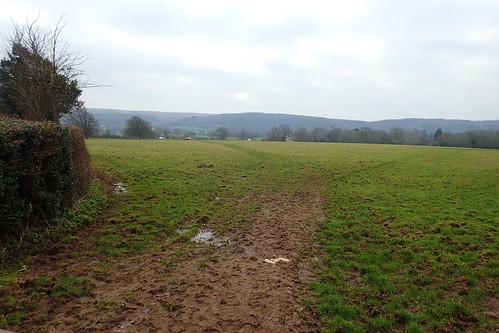 I crossed the access land of Havyatt Green to follow a path beside Havyatt Farm which would lead me to a road… Havyatt Road. This is one of the most frequently used routes between Wrington and the A38. 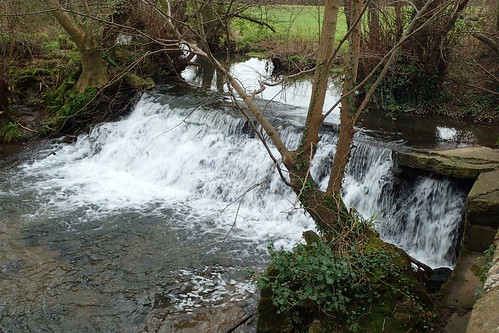 Just west of Mill Farm and along this road is a weir, just off of Wrington Bridge, that I photograph frequently.., In fact, I captured my latest on Sunday afternoon! 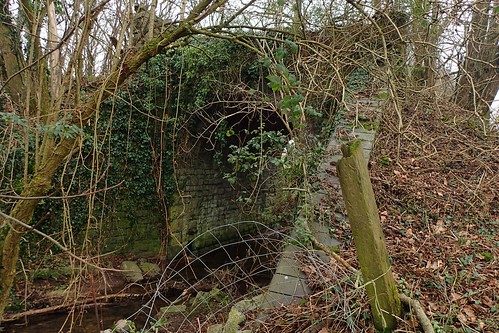 I would turn west from here, leaving the weir to follow a footpath towards Beam Bridge. It’s a route I know quite well – well enough to avoid in the winter, without unless I have boots on – but I’d never taken much notice of this bridge… Which I can now see used to carry the disused Wrington Vale Light Railway to and from Blagdon.

If only the funding could be secured and landowners agreed to having this route restored… It would create a cycle path to rival the existing Strawberry Line and increased access to the Mendip Hills. 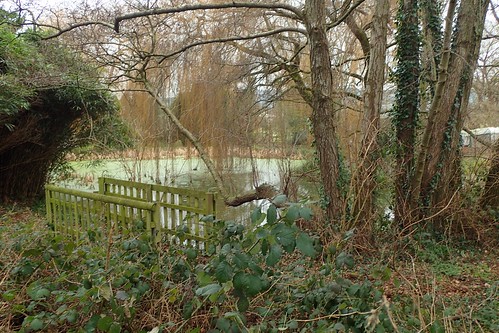 Sadly, some of the nearby land is likely to be built upon over the next couple of years. In an area that heavily floods when the rain falls hard and fast. 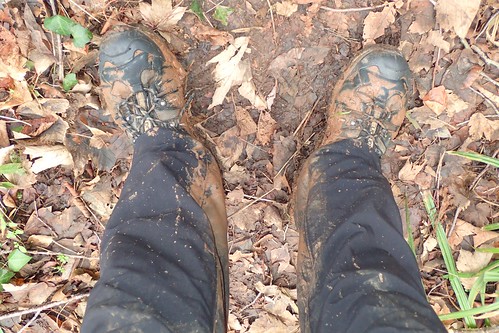 As I said, this part of the route can be muddy, outside of summer time. I’m very self conscious about wearing gaiters or carrying walking poles around the village I live in. 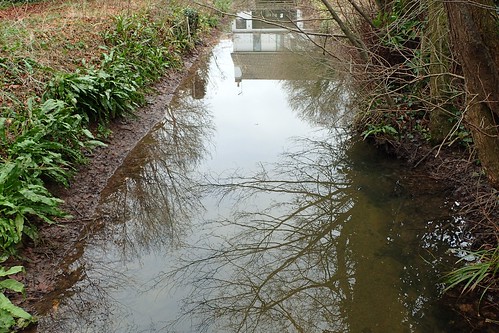 There are a couple of houses, here in this idyllic location. One even had a flat available to rent a couple of years ago. But, it was out of my price bracket. 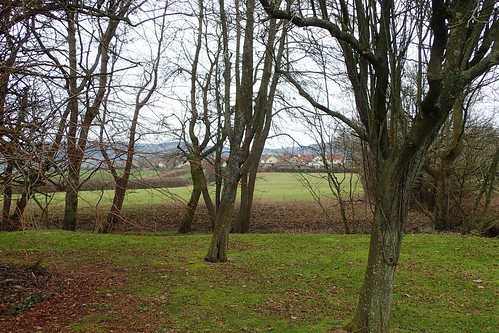 Soon enough, I was back home in Wrington, somewhat satisfied with the route I had developed… At the same time, eager to explore and conquer more! But I’ll save that for another post.

Distance of this walk: 9.5 miles