This was only a fortnight ago and yet, here we are, bracing ourselves for ‘Mark II’ of the Beast from the East!

My second walk of the previous experience would again set off from my doorstep in Wrington. Although the roads had been cleared, I wanted to keep things very local. 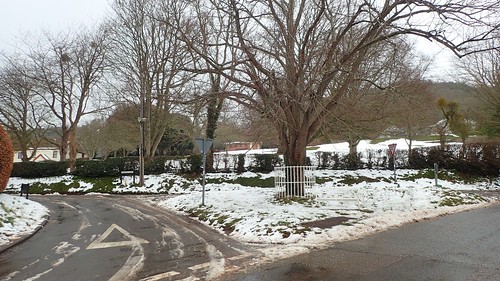 I was already aware of the route I was going to follow. From School Road, I climbed up to join Old Hill and, from there, the gradient increased on my way towards Barley’s Farm. 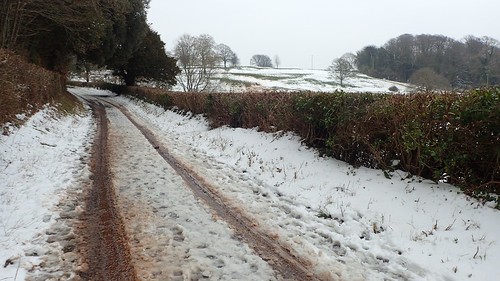 This is part of a favoured route for summer evenings. With the clocks about to ‘spring forward’ [how I wish we could permanently remain on British Summer Time…], I know that those days are not far away.  I’m still looking at moving to a fresh home, somewhere. In reality, it probably won’t be in Wrington. I’ll miss this convenience when I have to let go. 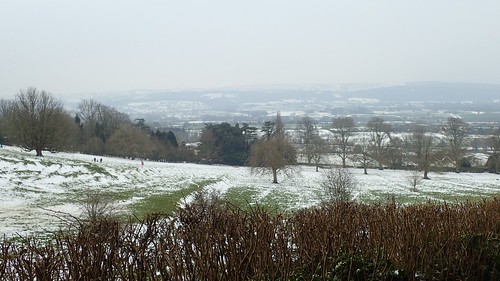 A lot of traffic (footfall) had covered this dead-end road over the previous twenty-four hours. Away to my right, parents were supervising their children on plastic sledges. I imagine this space would’ve been packed with people on the Friday.

But, according to my map, this is private land. 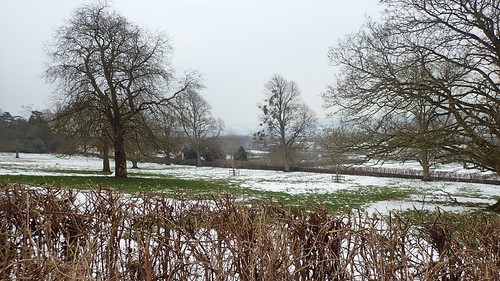 Through social media, someone recently informed me that this ‘has always been’ Wrington’s sledging hill. On the OS map, it’s actually marked with the symbol for ‘garden/arboretum’ [I had to look it up] and, I presume, may be part of the Barley Wood estate (a corporate events space). 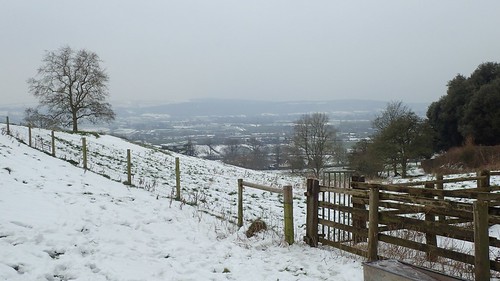 I left the bridleway to turn right and head through Barley’s Farm. I’ve said it before but, from here, I find some of my favourite views overlooking Wrington and the vale, with the Mendip Hills in the short-distance. 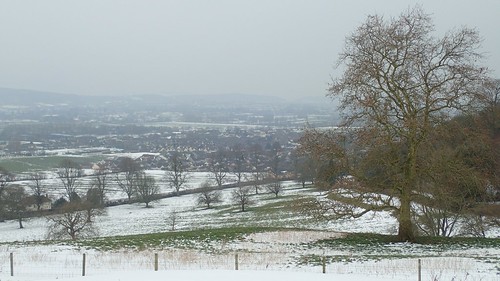 Seeing it in the snow, it was special for me. A moment of opportunity. I could’ve moved home at any point in the previous three years and missed out on this chance. 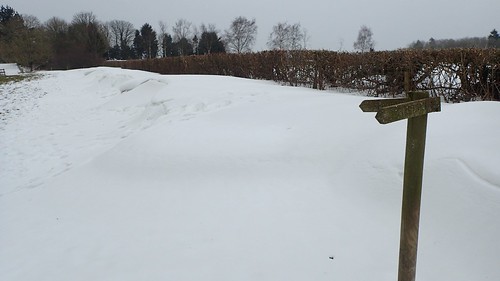 Large drifts bordered the perimeter of this first field. 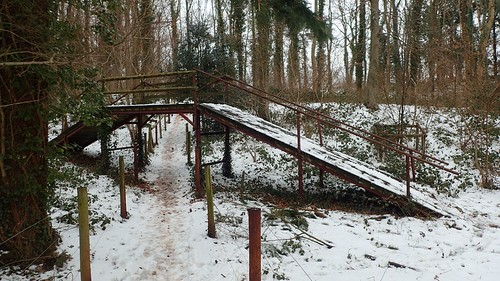 A footbridge crosses the right of way just north of Tucker’s Grove. This bridge is strictly private and is a right of passage for people who like to shoot game… It looked like they’d been busy over the past twenty-four hours. 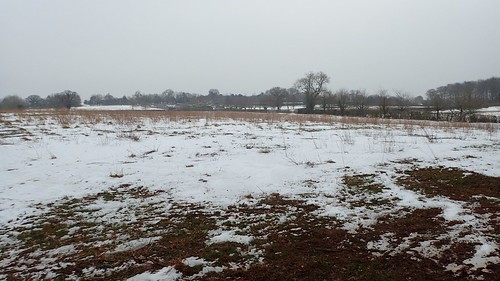 My view opened up again, en route to Meeting House Farm. Before I would loop back around the north of Barley’s Farm, to rejoin the bridleway. 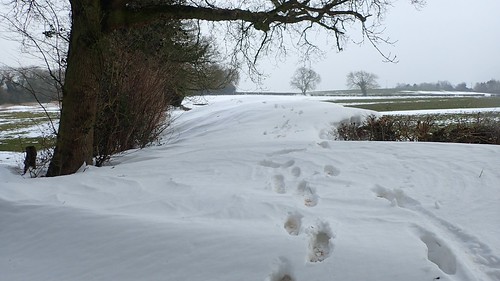 This path is defined by rows of hedges and trees on either side. Yet, the drifts remained to be impressive. Above, it’s worth noting that the hedge on the right is almost as tall as I am (6ft1in)… 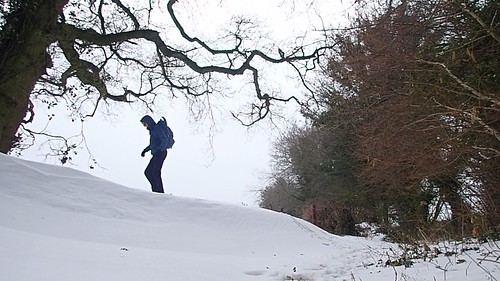 Thanks to a still captured from my video, you can see that the snow was indeed compact enough to cross. But this path leads down to Broadfield Farm; not the way I was intended to walk and an area I tend to avoid at most times of the year, due to the rutted and muddy nature of its terrain. 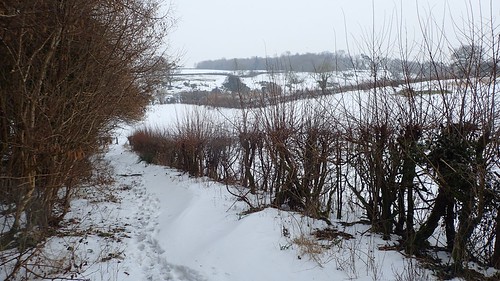 A bit further along the bridleway and I’d be able to turn left towards Goblin Combe. Continue on two far and I’d reach the road at Brockley Combe. 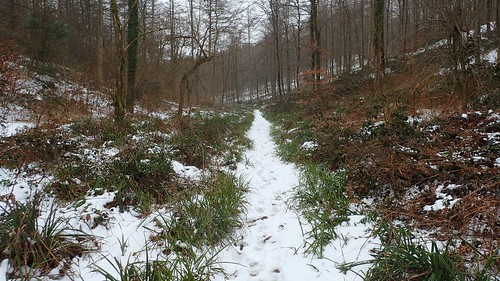 Visitors to Goblin Combe rarely seem to venture out this far to the east. Myself, I don’t often walk this path – although, that’s mainly because I know it can be wet under foot. On this occasion, I was crunching on ice. 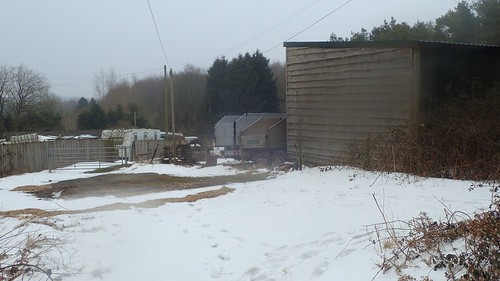 There are still many paths within these woods that I’ve not explored. Some are clearly defined as public rights of way, while others are marked simply as ‘tracks’ and may or may not permit public access. Anyway, trusting in a path with no footsteps to follow through the snow, I led myself to where I wanted to be. 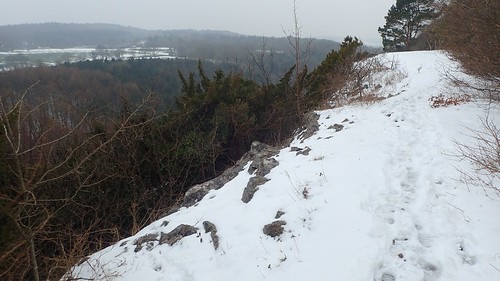 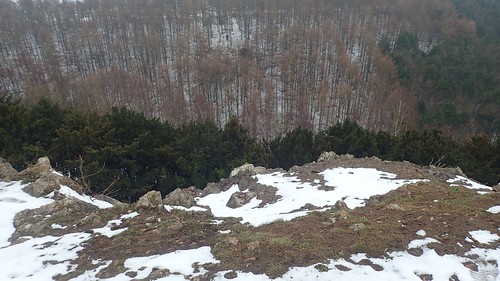 I’d found my way on to the clifftops. Towering over the combe below with the Mendip Hills in the distance and other woodland estates before that. 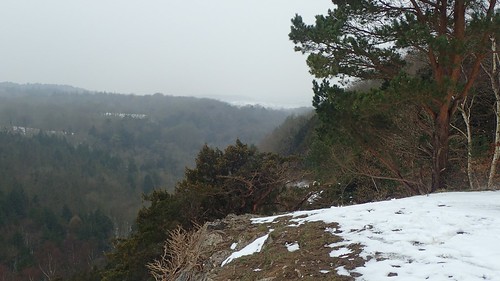 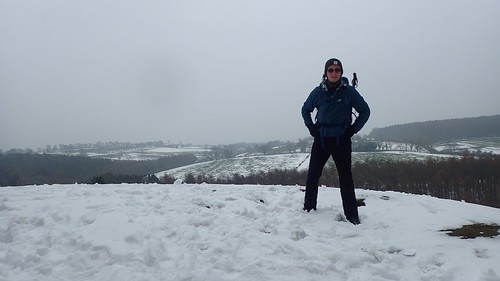 I remember now, how I’d over-dressed with my layering setup and had felt myself beginning to overheat, up until this pausing point. With a cup of tea in one hand, I made subtle adjustments, knowing there would be at least one more climb to follow, before I could return to Wrington. 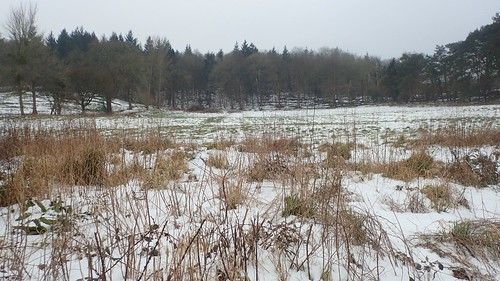 I took a fairly straightforward route down, through and out of Goblin Combe and Cleeve Woods, without seeing or hearing another soul, as far as I can recall. 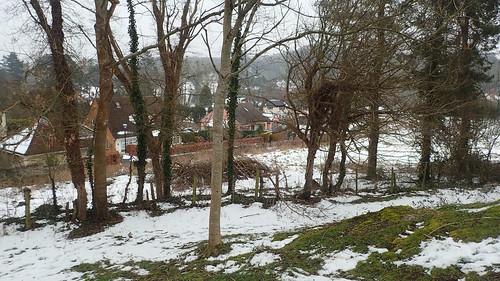 Crossing Cleeve Hill Road, I began climbing south, away from the houses and towards King’s Wood. 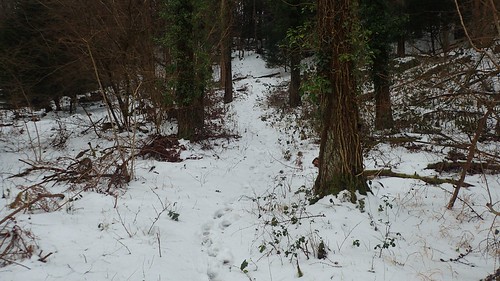 Another familiar route, although challenging in the snow. I also noticed that the often permissive footpaths had been closed on this occasion… Possibly due to shooting-related activities; possibly to keep people from wandering off in the snow. 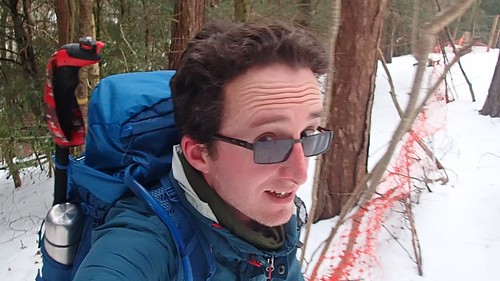 Another still from the video footage; nearing the end of my final climb, just south of Woolmers. 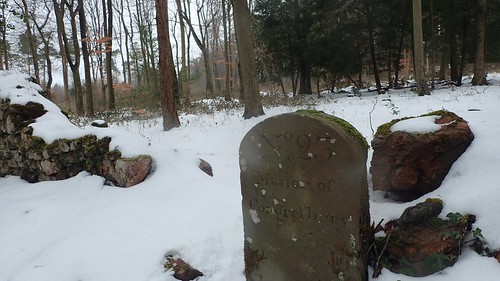 From the end of my day’s final ascent, I’d turn east and away from Ball Wood, soon to pass by one of the thirty-or-so Congresbury Boundary Stones. There are supposed to be around thirty-one of them in existence; each one numbered; some residing within private land.

I reckon I’ve found no more than eight, without breaking the law. 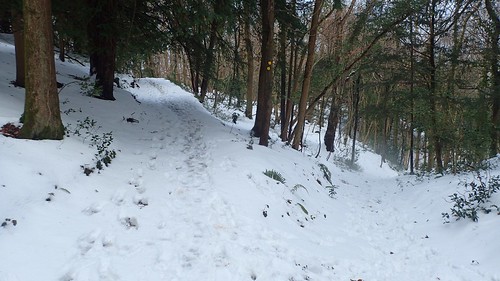 I’d continue downhill through the woods and towards Udley. In some areas, I feel the waymarking could be better… Particularly where it’s non-existent, and trails of footsteps can be seen having headed along the wrong course.

It is then human nature to follow the prints as recorded by others… Not for me, however, as I’d equipped a map and a set of basic navigational skills. 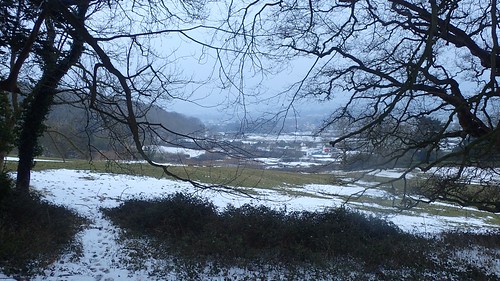 Further distant views of Wrington, before I’d soon pass down beside the llamas to reach Wrington Road near West Hay. 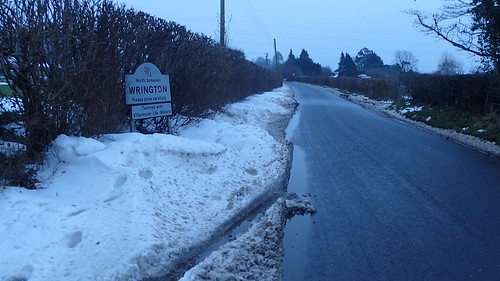 This road would leave me home and to the kettle, just waiting to be boiled.