One week earlier, the south-west of England had suffered its heaviest dosage of snowfall for a good number of years (dubbed: ‘The Beast from the East’). Portions of the M5 motorway were, closed as many counties slowed to a standstill.

Worst of all, this walk was cancelled and immediately postponed for seven-days. But when the time came, the weather was greatly improved. 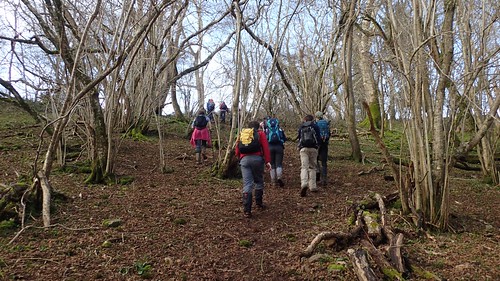 This was a group walk led by Jenny. While the majority of group members convened at the car-share meeting point in Bristol, I drove straight to the car park in Wells, paid and displayed… My memory says it was only £2.80 for all-day parking – is there any other city in Britain that could compete with that?

We joined joined the West Mendip Way – a route I know very well – and would follow this north through Wookey Hole. 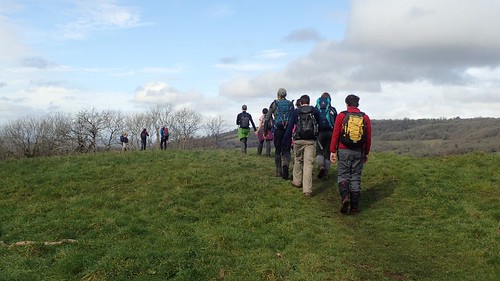 I’m writing this on Friday evening… Twelve-hours before ten members from Brunel Walking Group will begin their own challenge: walking the entire length of the Mendip Way (west to east) over the next three days! It’s a great idea and, if I wasn’t so overly-familiar with much of the route, I might’ve joined them. I wish them well in their quest beneath the wet forecast.

Following the West Mendip Way from Wells would naturally lead us to Ebbor Gorge. We would leave the long-distance path at the foot of the daunting steps – I won’t have to climb those again until early June. Instead, we were destined for the rugged route up through the gorge itself. 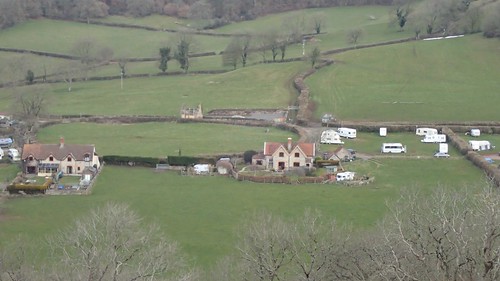 Stepping back a moment; ahead of Wookey Hole, we paused for a brief break on top of Arthur’s Point. From here, I could look north beyond Lower Milton Farm and see that a well-known dilapidated building (which nature has fought to reclaim over time) appears to finally be undergoing some form of redevelopment.

I’ve no idea exactly what’s being done but, two or three years ago, there was talk of it being converted in to a holiday home. Clearly, some work is being done to the land immediately east of the roofless building as well.

Back to the gorge… 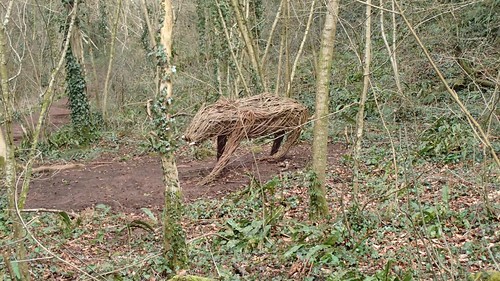 I was pleased to see that Willow the cat has been restored since my last visit. 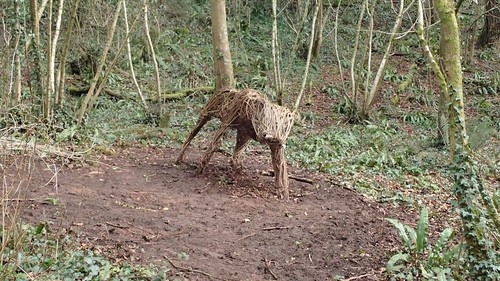 …Although, she may have evolved in a sabre-toothed boar! At least she’s no longer naked. 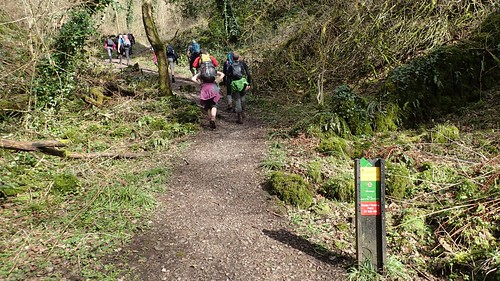 There’s a reasonable incline from here, before reaching the rocky path that climbs up to the top of Ebbor Gorge. 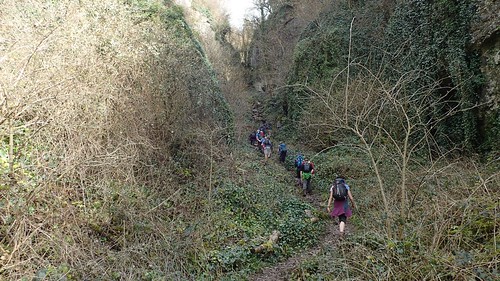 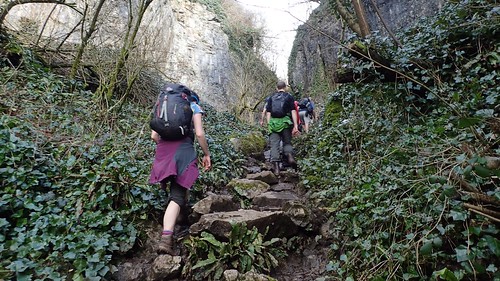 I wouldn’t suggest that specialist kit was required but it’s quite a challenge at times (especially going downhill) and I would not recommend it under wet or icy conditions. 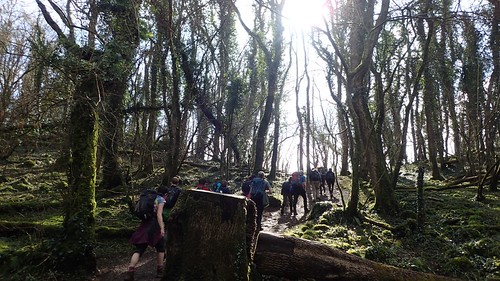 Short of breath, we all made it to the top. At which point, we turned back on ourselves to climb a little bit higher. Just when you might think the hardest part was over! 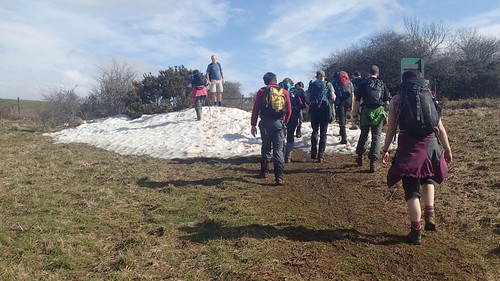 There’s an option to head west a short distance to the viewpoint – something I’ve done on a number of occasions. Instead of that, we continued to walk east, initially following the West Mendip Way and crossing a surviving patch of snow. 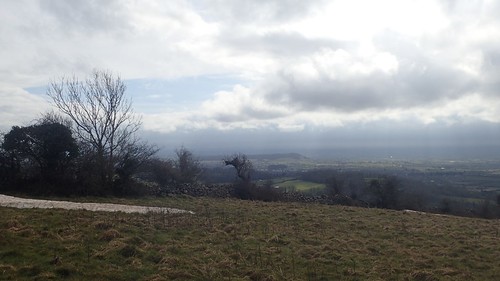 It was after this excitement (I seem to remember Fiona or someone sinking) that we would leave the Mendip Way and continue heading east towards Rookham.

We stopped for lunch just off the junction with the Monarch’s Way (north to south route). A dry-stone wall offered just enough shelter from the Siberian breeze. Meanwhile, a group of DofE practitioners passed us by and settled for their own lunch break a few dozen metres to the west. 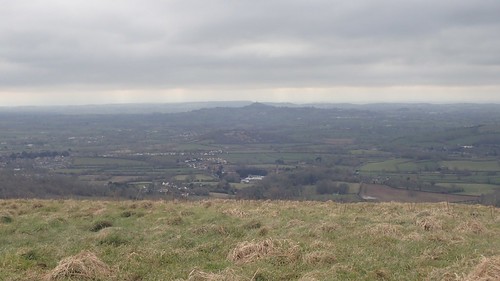 With views like this, it’s understandable why this is one of my (many) favourite sections of the Mendip Hills. 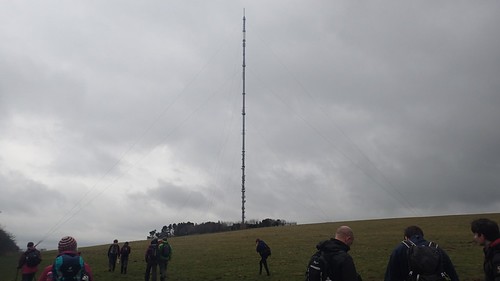 We’d soon pass the iconic UHF transmitter on Penn Hill. There’s also, I notice, a trig just south of the tower – one I’ve not previously bagged because this, sadly, is not open access land and would require straying from a path, in a field that often houses cattle.

There was some debate as to how tall the mast might be, At 281m, it was around three-times as much as we had each anticipated! It’s base it 305m above sea level, meaning the red light on top is almost level with the country’s lowest mountains. 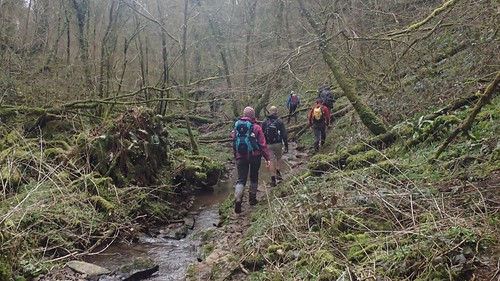 We crossed the A39 – close to where I got my car stuck a couple of years ago and requiring an expensive emergency callout – and would make our way back to Wells via Biddle Combe. 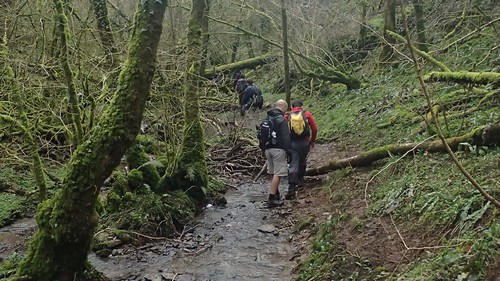 I’d walked through here only once before; in the opposite direction and on my own… Somehow, on the other side of the stream, I wandered far beyond the right of way to arrive at a dead-end fence… With a gun-wielding man beyond! Between the two of us were the targets he was using as practise. Thankfully, there’s nothing more to that story! 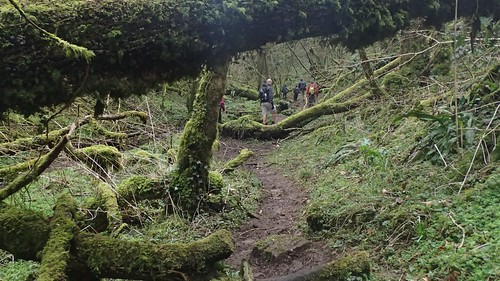 But, on this adventure, descending Biddle Combe, we were facing challenges of our own… Without misdirection. 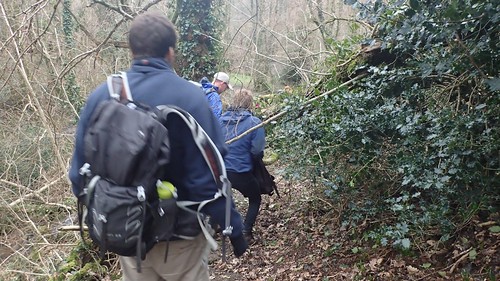 Jenny had warned us of how the stream and footpath frequently merge in to one. Meanwhile, trees and branches were hanging and drooping down from all over! Up, down, over, under and around, we went.

It was somewhere along this section that my migraine kicked in. First the vision went funny in both eyes, before the pain kicked in above my right eye. 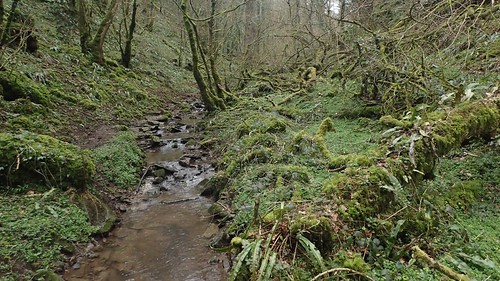 Eventually and, with relief all around, we emerged from the combe to arrive beside the B3139 road. 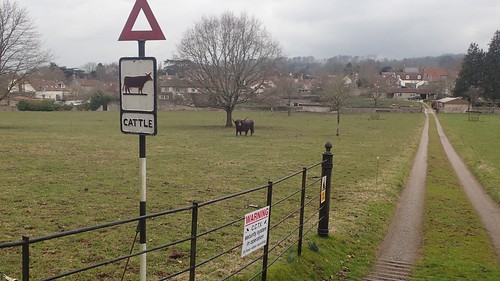 There was now only a relatively short walk left before we’d return to our cars. I’m still not sure if that cow was real or not. 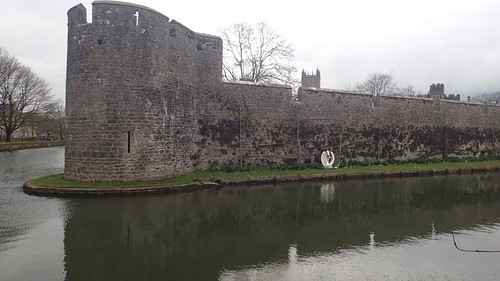 We would brush briefly with the East Mendip Way, following the moat beyond Bishop’s Palace (and that oversized swan – definitely not real). 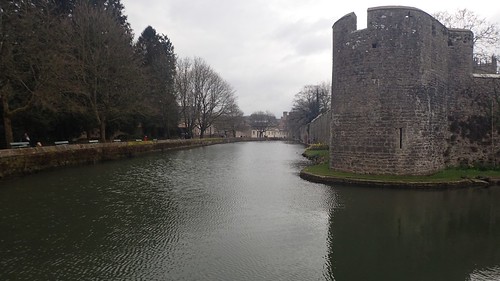 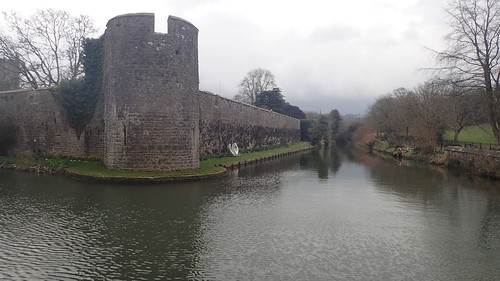 An unexpected sight awaited us, as we passed the Full Oon pub… 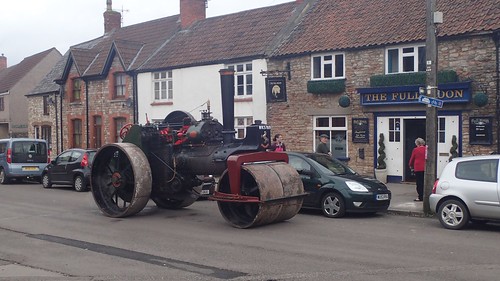 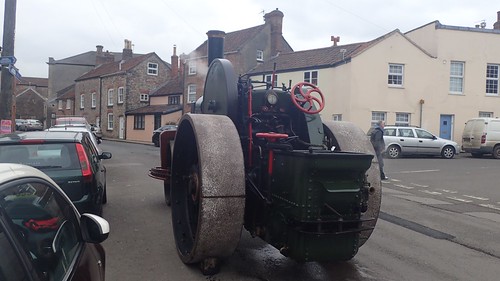 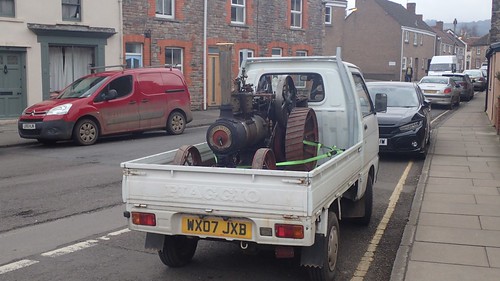 I don’t know what the occasion might have been. Its driver had dashed inside – probably to grab a pint. Unless drink-driving laws also apply to steam-driven vehicles?

I’d decided not to join the others for a drink in a nearby pub, with the sickening and intense pain above my right eye (it’s usually my left). Driving home was enough of a challenge and I passed on the chance to see my mum on Mother’s Day because of this.

But, it was an enjoyable walk and one of those rare dry days that we hadn’t seen many of for several months.