This was the most recent walk I’ve led for Brunel Walking Group. It may even be the last one I lead for 2018. I reckon I’ve now done six or seven this year.

For me personally, this was a return to the coastal side of northern Exmoor that I’d not seen for a couple of years. I didn’t fancy driving down and having to fare the expense of fuel alone. So, I decided to take the group and without having recently pre-walked the route! 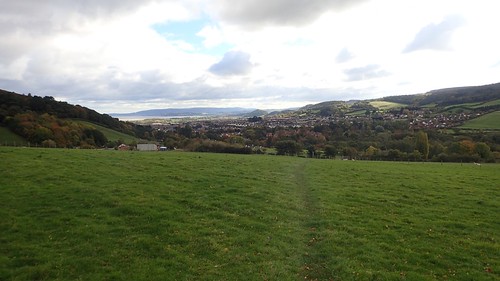 Our walk would begin from the National Trust-owned car park, just east of the village church in Selworthy. Interestingly, this car park is ‘free’ to use… Although a donation box is available to use beside the entrance (I dropped £1 in).

Three cars were due to arrive, including my own. Ed had driven down by himself and turned up wearing shorts… On an October day that could’ve been mistaken for winter. Apparently he didn’t have any walking trousers and he rightly knew that jeans would not be appropriate.

He then confessed that he was in so much of a rush to leave on this Saturday morning that he hadn’t packed any water. I lent him the spare 700ml bottle I tend to carry when walk leading, along with a spare pair of waterproof overtrousers he could put on, should he start to feel cold.

We were still waiting for Andy’s car, who’d been delayed by several incidents. In this time, I sent Ed down to the local tea room (Periwinkle Cottage), so that he could buy a sandwich, a bottle of coke and survive the 11.5 miles of ups and downs that were about to follow.

An hour later than intended, we started walking east towards the village of Bratton. Interestingly, this was the second walk of mine this year in which we’d been delayed by an hour. 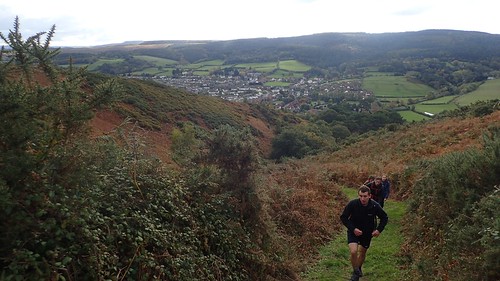 From Bratton, we cut through Woodcombe (the next village) and began a punishing climb up and out of Wood Combe (an actual valley).

A well deserved rest ensued at the top. I think there was even a bench for two or three people to squabble over. I was keen not to rest for too long as the temperature had dropped significantly ahead of this weekend (it was the anomaly of October) and we were also behind schedule. 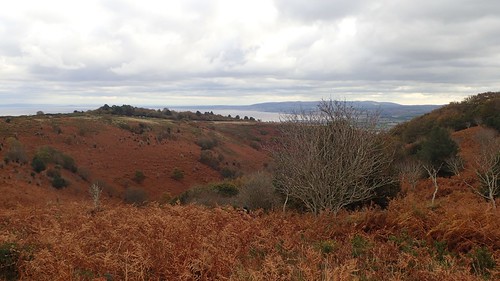 Thankfully, I’d put this walk on for a Saturday, meaning there was no urgency for many people to be home in time to rest before work the next day.

I could remember being in awe of this valley when I first visited it on the Winter Solstice, a few years ago. Conditions then, were even less comfortable. As we climbed up and on to North Hill, we met with the bitter northerly breeze. 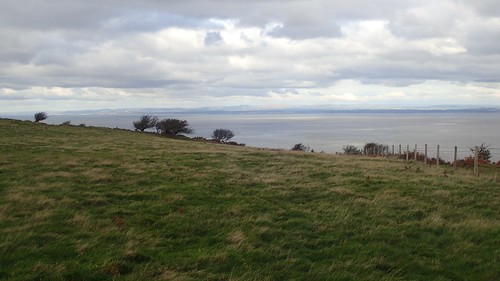 Crossing the road on top of the hill (available for those who don’t like walking up hills…), I followed the bridleway sign into an immovable body of bracken and/or gorse. If there was once a bridleway here (according to the map, there is), it has since been consumed by the undergrowth.

We took a short detour east to the car park and joined the South West Coast Path (SWCP) from there. 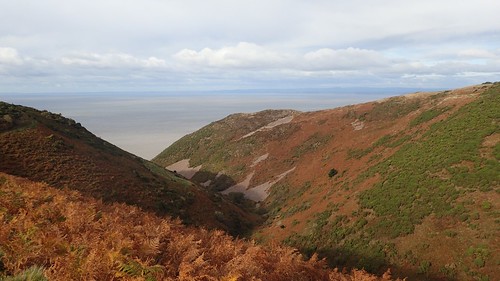 For anyone in a hurry or looking to evade any physical challenge, you can follow the ‘easy’ SWCP straight along the top of this hill, running east-to-west. My followers, however, were destined for the ‘Rugged Alternative’ route and its many ups and downs.

It’s not at all comparable to Crib Goch in Snowdonia or Scotland’s Ring of Steall. But it is like walking many miles of the Cornish coastal path; condensed in to a few miles of intensity. 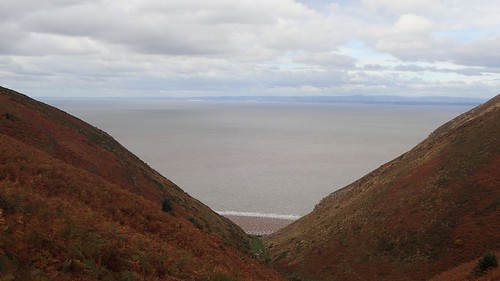 Being the one route that runs closest to the coastline, I believe it has an affinity with the majority of determined coastal walkers. We reached the halfway point in our circuit as we rounded Furzebury Break on the map.

We crossed Grexy Combe, Henners Combe and stopped a second time above East Combe, almost tucked in and away from the wind leaving a chill along the Bristol Channel. 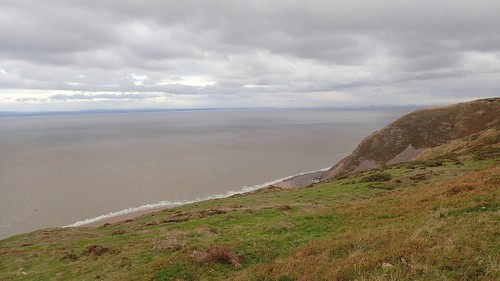 We stopped for no more than fifteen minutes, which was enough time to have something to eat, a warm drink and before anyone became too cold. 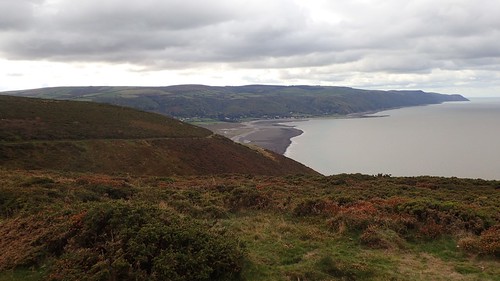 As we crossed Hurlstone Combe, we would leave the SWCP, with views across Porlock Bay towards a section of this 630 mile-long trail that I’m still waiting to explore… 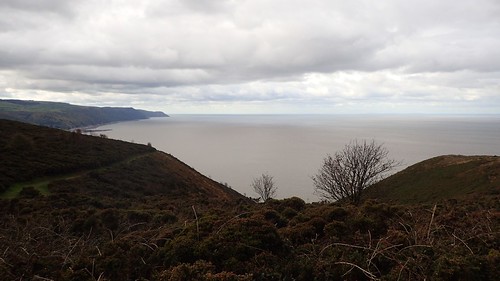 I walked down Hurlstone Combe once, back in 2016. I’ve promised my knees I won’t it doing it again anytime soon! 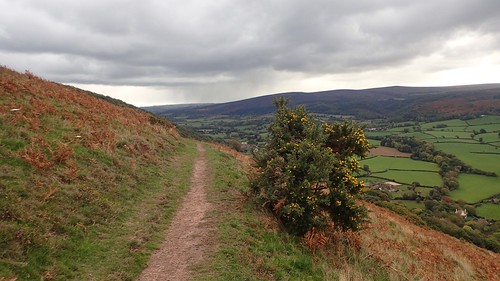 We were now rounding Bossington Hill on our flanked return to Selworthy. 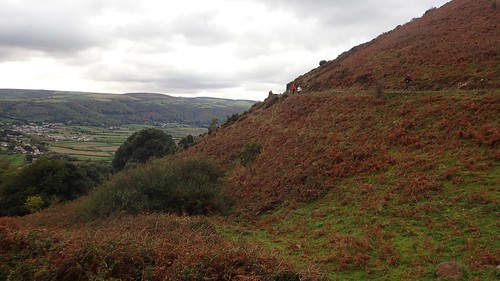 I fear some people thought we were done with the ascents for the day… But there was one long and enduring climb left before we would finish. 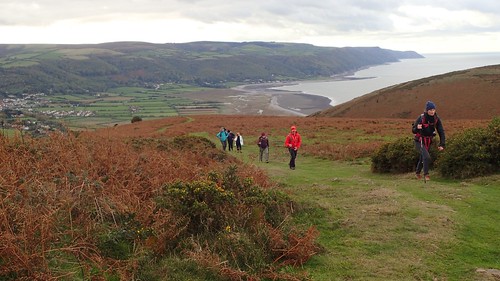 This would lead us towards Selworthy Beacon – the highest feature of our route.

…Between you and me, we could’ve taken a more direct route from Hurlstone Combe, up and over Bossington Hill… But this was the same challenge I put myself through in December a few years ago and I do feel it was a good experience for the two American hikers who’d only been in Bristol a matter of weeks.

Welcome to England! Generally crap weather, a comparatively small island and the occasional walk leader who should be leading intensive drills in the army!! 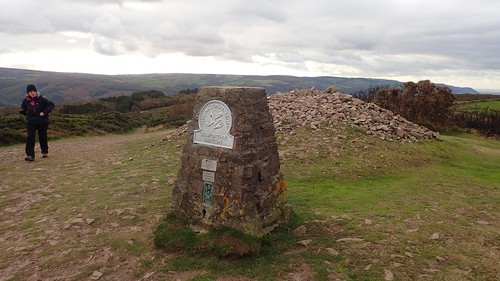 I wrote something recently about potentially heading to Beacon Hill in the Quantocks for New Year’s Eve. Well, with a car park close by, this is another contender. 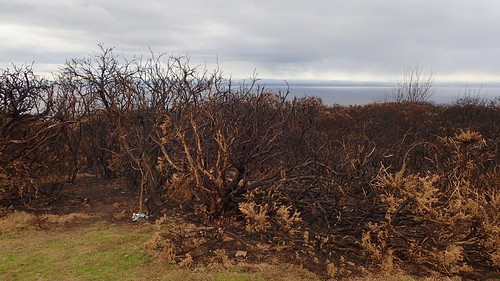 Bracken burning is an act that’s regularly carried out around Somerset’s national parks and AONBs. I’ve seen a lot of warning signs go up across the county, warning of the threat of poaching; a highly illegal practice at the expense of many innocent deer, it would seem. 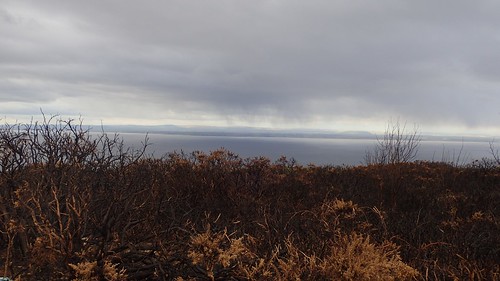 We’d walked for over eleven miles beneath an overcast sky. Showers threatened on the odd occasion, while South Wales, across the channel, had been blessed with clear blue sky and sunshine… As we made our woodland descent towards the cars, these fortunes began to change and we were de-booted and seated before the worst of the rain fell. 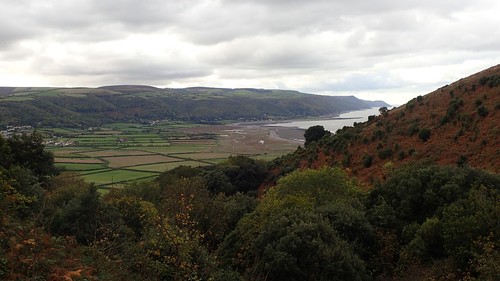 Post-walk, my plan was to stop off at a pub on the way home (tea shops are generally reserved for an older generation…). I decided we would head for The Blue Anchor in the village of the same name and it was only a twenty-minute drive away…

Unbeknown to me, the pub had closed only weeks earlier and it was due to the continued through of coastal erosion.

Back along the coastal road, we retreated to The Smuggler’s Inn. A curious find, where you descend in from the front door to discover the subterranean bar. With limited local seating, it’s not the best place to bring a group of walkers but they were kind enough to lend an unreserved dining table for all nine of us. As small as the bar area was, they did have an open fire. It’s only a shame that the barman ‘couldn’t be bothered’ to make the requested (and advertised) warm drinks that some of us had asked for.

A good day out on the coast but as always with these ninety-minute trips from Bristol, for me, it felt like a long a dark drive home.