Although I’d left it quite late with the planning of my accommodation along the South Downs Way (we’re talking about making initial enquiries only two-to-three weeks in advance…), I thought I had everything sorted and that I would be able to follow my daily itinerary as planned.

On that first evening, however, my laid-out hopes began to unravel… 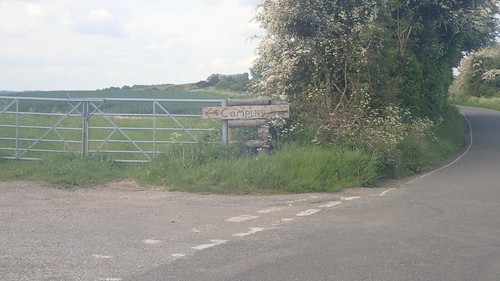 While I hadn’t booked or reserved a pitch, I was expecting to camp at Upper Parsonage Farm. Having spoken to the lady who runs the site a few weeks earlier, I was told that they were expecting to be busy (it was a Bank Holiday weekend) but they could probably find space for me. 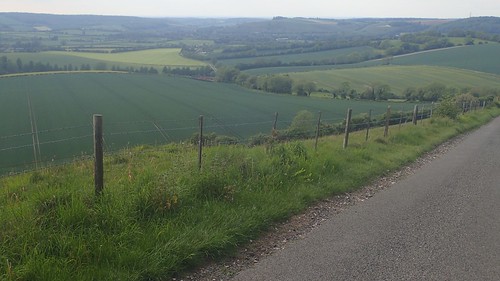 It was indeed, a very long way down that hill. Where the sign states only “½ mile”, I felt as though the farm was at least fifty per cent further on, as I found myself tumbling down the road in expectation of a decent night’s rest.

Another part of my brain had told me that I should’ve stopped and phoned ahead from that sign at the top of the hill… Just in case. But I don’t like making phone calls. As I arrived at Upper Parsonage Farm, I could soon see the campsite. I followed the ‘Camping’ sign to the main house… Only to find no answer at either of the doors, with dogs barking at once entrance and no-one else to be seen or heard.

Some might have pitched up and attempted to find the owners in the morning. Had I made a confirmed reservation, I might’ve done this. Braving the dreaded phone call, I met only a ringing phone at the other end, followed by the answer phone. Slowly and reluctantly heading back uphill, I would pause and phone again but without once hearing a human voice at the other end. 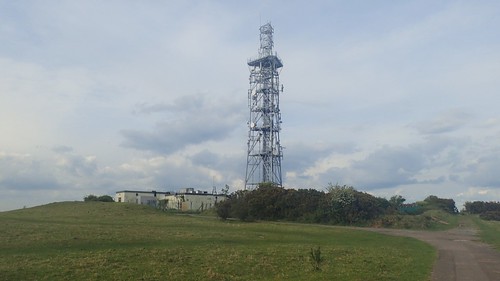 A sense of panic began to grow within my mind. I could phone John for an evacuation; potentially disrupting his Saturday night plans. In all of this, I walked on up to Butser Hill – interestingly, this one is touted as a landmark of the trail, while the South Downs Way barely grazes it.

I found my way to the trig point easily enough – I don’t think I’d ever bagged this many in one day. It was a fine evening, drawing to the end of a warm and sunny day. 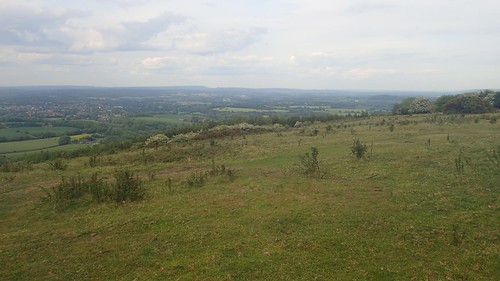 Now and again, I would repeat the call to that landline number. An hour soon passed and I was yet to have reached someone on the other end. 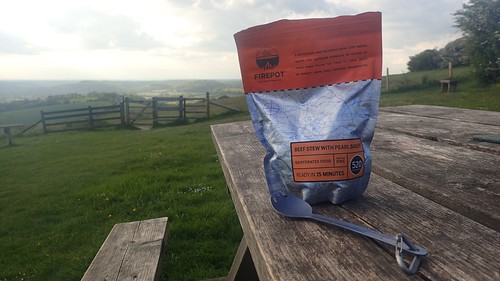 I had enough water on me to fuel my first evening meal of the six-day trek. Setup on a picnic bench and drawing the inquisitive glance from the occasional passer-by, I set my Jetboil alight and soon tucked in to my stew. I do highly rate the meals available from Firepot. 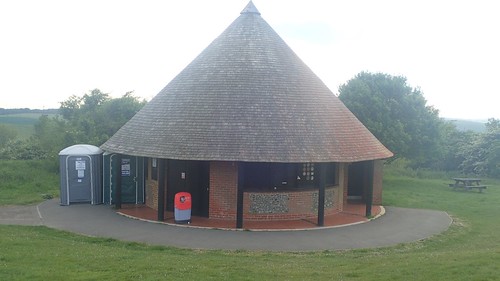 As I saw things now, I had two options. Going home and phoning for help were removed from the occasion. I had travelled this far. But with my future steps, I knew I was going to need more water… Tragically, the gents are only provided with portaloos on Butser Hill (I wasn’t prepared to boil hand sanitiser…) and there were two many females around for me to brave searching for a proper tap inside. 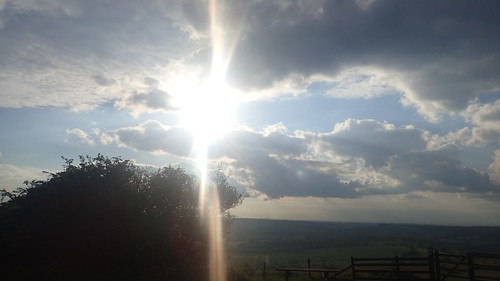 This led me to the decision of pushing on with my walk. I was either going to walk on through the dark of night or wild camp somewhere (neither of which I had done before). In my quest for water, I noticed on the Harvey’s map that there might be a water tap a few miles away, over the A3… I could always return to Butser Hill for my proposed wild camping spot. 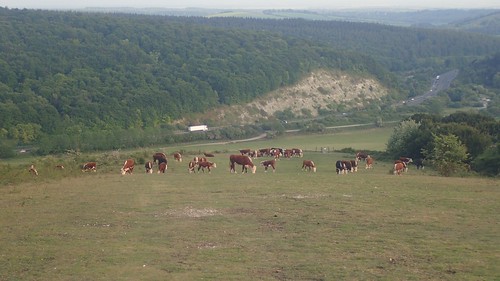 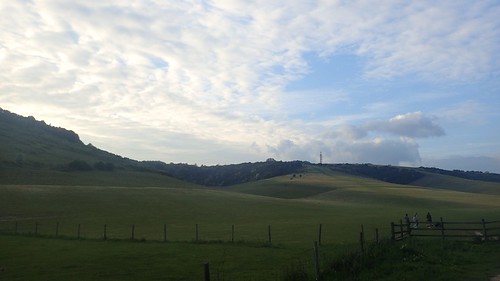 While the cows didn’t present any issues, this was an unexpectedly long and steep descent away from the top of the hill. Plus, I’d passed a reasonably-sized group of people who were involved with some event in one of the fields… If I was to return to the top of Butser Hill with a full supply of water, it’s possible I would be recognised. Anything but stealth. 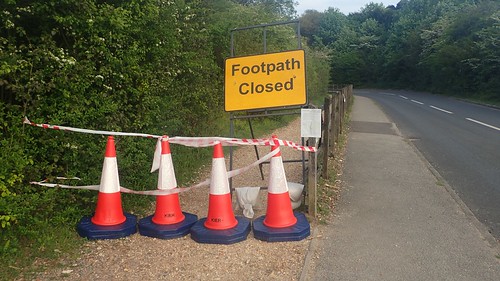 I followed a cycle path too far south alongside the A3, having mis-read my Harvey’s map… How often have you spotted the symbol for something (maybe a car park, pub or camp site) but not noticed the blue line pointing to its location? I was trying to find a way up above the west side of the road, near Wascoombe Bottom, where the water tap symbol appears on the map…

But the blue line points across the road and in to Queen Elizabeth Country Park! 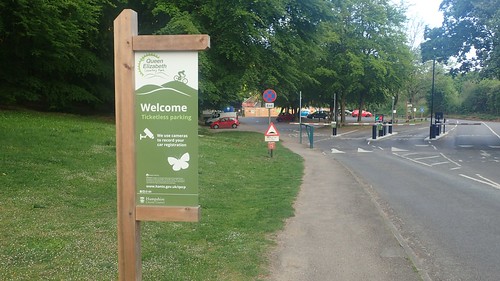 This was also the first location where I’d noticed signs for ‘ticketless parking’, which I would learn is quite common across the South Downs National Park. 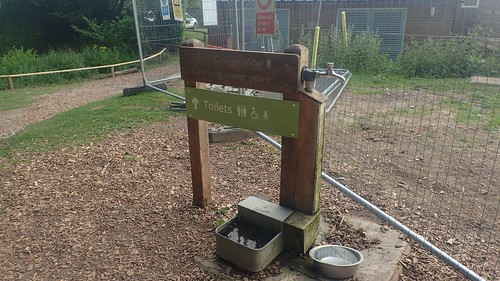 Although there were no specific signs for the water tap, I did find it close to the toilets and, thankfully, it was working. Without a water filter in my arsenal, I don’t know what I’d have done without this convenience. I filled my bladder and bottle with as much as I dare carry and followed the South Downs Way up in to the woods; still not entirely certain of my plans from here on.

Near the top of the hill, where I’d hoped for some kind of clearing and a view to the surrounding land, I found the woods to be a peaceful place. It was only around 20:00 by this time. While wild camping is prohibited in most parts of the UK, the general code of practice is that you ‘arrive late’ and pack up early…

I took this photo the morning after. I sat around for an hour, without another human soul passing by. I cleared a few twigs for a flat-enough space on the ground, pitched my tent (Luxe Hex Peak V4A) better than I’d ever managed to and was settling in to bed at around 21:30. Darkness fell prematurely under the canopy of trees. 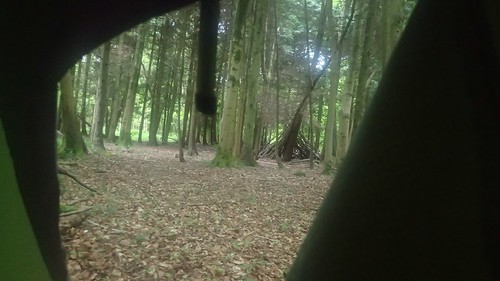 My biggest fear of this point was in being spotted or found out and asked to move on, if not worse. What if some roudy ‘Yoofs’ were to emerge at 2am and cause a disturbance? I’d pitched away from the trail but mountain bike paths exist close by.

I can remember gently nodding off to sleep, only to be awoken by the sprint and jump motion of what must’ve been a passing deer. Somewhere at around 2:30 in the morning, I was awoken by noisy footsteps following my tracks to the tent… It would shuffle forwards quickly and then pause. Forward and pause. Again, until it was right outside of my shelter. I figured it was a fox and I’ve seen the chaos they can cause to a wild camper when they get a whiff of food (of which, I was still carrying a good 2kg worth).

I clapped my hands, shouted something and off it went.

It would be false to have said that I slept well. Regardless of these disturbances, I spent a lot of time ‘waiting for morning’ – as I find can easily happen when camping in some discomfort. My night was draught-free, thanks to the surround of trees. No punctures to any of my kit were received and, it was only while packing up before breakfast (this was close to 7am and possibly later than most wild campers would intend) that another human ran by, as part of his morning ritual.

I had been grateful for the chance to rest, even though I made the mistake of sleeping in the same clothes that I had walked in for almost twenty-seven miles! Not only was my second day now several hours shorter than intended but I was up for an early start.

I’d always assumed that my first wild camp would be somewhere on Dartmoor and abiding by the law. I have even been contemplating an overnight stay on a mountain in South Wales for this summer. I’m pleased to have accomplished my first and, yes, I would like to experience more!

2 thoughts on “My First Wild Camp (SDW: Night One)”