Details of a 9.5 mile walk around WImbleball Lake and Haddon Hill on Exmoor.

I remember this as being a rather fortunate day of work, immediately after the August Bank Holiday weekend. As I worked on the Saturday, I gained the extra day in lieu, when I would otherwise have been returning to work. Not wanting to waste it, I drove down to Exmoor – barely one week since my previous visit to Dulverton – and would begin a circular walk from Wimbleball Lake. 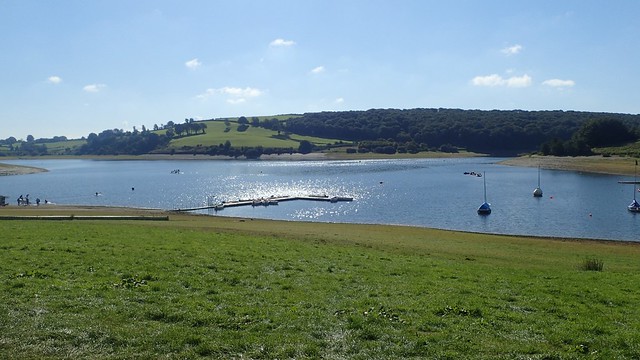 ‘Wimbleball’. It’s an odd name, isn’t it? No-one amount of Googling has yet revealed its origins to me. A name that I’d been aware of for several years. Every now and then, I’d meet someone who’d walked there and would recommend it. While I was less enthused towards a circular lake walk… Not knowing what else to do on this day, I drove down, knowing that I could tick off Haddon Hill at the same time.

If you know where to look (and can arrive early on a weekend), then there are a few free car parking options around the lake with limited spaces. However, I drove in to the main car park, soon paid £4 to stop for the day (the machine only takes coin, no cards and nothing by phone). Soon, I was followed signs down toward the water.

I’d decided to walk clockwise, meaning that I would begin by heading north towards the road that had led me here and Bessom Bridge, which crosses the lake.

One of the reasons why I’m less excited about a lakeside walk is that, close to where I live on the Mendip Hills, two of the man-made reservoirs allow for very little public access around the perimeter.

This is partly for reasons of conservation and not disturbing the natural wildlife. Permit holders can gain some access for fishing. But for the rest of us, attempting to walk around either Blagon Lake or Chew Valley… We can expect to clock up a few miles along the road!

Back to Wimbleball though and a wooded path (not marked on the OS Map) led me eastward alongside the road but not stepping on the pavement until I reached the crossing.

There are several warnings signs to discourage people from taking a deep dive from the bridge and in to the water, with its ‘hidden objects’ in the depths.

I couldn’t imagine someone really wanting to do it here – it’s hardly comparable to any pool you might find in a hotter climate. But hours after sharing a few photos online, I heard about how some others had been doing just that over the summer – and presumably, living to share their photos!

Looking south along the water, I could make out the brownish heather-clad slope of Haddon Hill. By itself, a fairly remote and disconnected patch of moorland, in this south-east corner of Exmoor National Park.

Wimbleball Lake is, of course, man made and the work to dam the River Haddeo was completed back in the 1970s. Swimming (like diving) is prohibited, although you can partake in other water activities like stand-up paddleboarding, canoeing and there’s even a campsite very close by.

From the other end of Bessom Bridge, I followed a minor road heading south-east toward Rugg’s Hill. But this stretch didn’t last long and I would set foot on to another road before driving home, later in the day.

Signposting is very good around here, despite the fact that much of the ‘Lakeside Circuit’ is a permissive right of way that the landowner could rightly withdraw at short notice.

I passed the bird hide on my way down to rejoin the footpath – also surprised to see such a structure open to visitors during a global pandemic. But I only stopped in here to apply the dreaded sun cream and there was no-one else around.

I felt as though I would soon cross the halfway point on my circuit – as it happened, I soon found myself across the water from the main hive of activity from which I started my day.

For many people, this was the first day back at school or work for many months. I was excused, for reasons I mentioned at the start. But I was still surprised to see so many others about here. A good portion of whom were ‘young’ and of approximate school age.

My walk continued across a wooden footbridge that will soon need some TLC. Hoping some of the £4 parking fee will contribute towards that (although, I could’ve sworn that half the people parking didn’t and hadn’t bothered to pay).

Having crossed what I had deemed be “halfway” already, I felt as though I was making good progress and yet, it was becoming a bit of a slog. Forever in view of Haddon Hill, yet still out of reach. Following the natural curves of the apparently expanding lake.

Some sections of the walk are wooded, which provides welcome shade on a hot day, minimal rain shelter on another and divergence to keep the mind alive.

At one point, I was given the option of following the “Rugged” route, deemed as being suitable for summer use only…

When I think of ‘rugged’, I only think of the ‘Rugged SWCP’ between North Hill (Minehead) and Bossington Hill. An undulating way of combe crossings, otherwise preceded by the less-intense path along the top via Selworthy Beacon.

There were no great ups or downs through this section of the Wimbleball walk. A few stones under foot, perhaps, but nothing to compare with any section of the aforementioned coast path. I guess it would be hazardous in the winter with wet rock to walk on,

Several smaller sources can be found along the way.

I passed on the opportunity to detour away from the lake and out to the ruined Church of St. James in Upton. After a long walk out to the south-east tip of the lake, I then walked back west as I followed its fragile form – quite the shame that there isn’t a substantial footbridge to snip out this section.

Shortly before I would begin my ascent of Haddon Hill, I passed a slipway. No warnings though, to discourage people from using it as a giant water slide!

Squeezing between a fence and chained gate, I would leave the lakeside circuit for the next hour. It otherwise continues on a direct to the dam I would visit later on.

I zigged and zagged along the bridleways before joining and unmarked right of way. Some of the paths on the map were difficult to find and follow, here. But, sticking fairly close to what I was reading, I would soon find my way up.

At 355m above sea level, it’s by no means the highest hill you could climb on Exmoor. There’s a reasonable car park (and apparently toilets) very close to the summit. On one side, the land touches the National Park boundary.

Haddon Hill is one I probably wouldn’t have visited otherwise. With the River Haddeo on one side, it would be very difficult to plot an attractive circular walk of more than a very few miles.

Some way south of here, I wanted to say that I could see the shadow of Dartmoor. Somewhat clearer than on my wet and misty walk the previous weekend.

Pushing the for the summit, with the potential for lunch AND a trig point, I was catching up with a slow-moving family heading the same way. One of those awkward moments where I ponder ‘Do I speed up to overtake, or not?’…

In that polite and British way, I gave them plenty of space on the way up and, as they swarmed to the trig point and lingered for a good few minutes, I decided to find a space away from the attraction to stop, sit and have my lunch (which was part of the plan).

In doing this, I whipped out a brand-new stove from my backpack (the Optimus Crux Lite), a gas canister, 650ml titanium pot, a bottle of water and soon brewed a cup of tea.

This Optimus Crux Lite is another lightweight backpacking idea. Although several grams heavier and slightly less compact than the MSR Pocket Rocket 2 that I bought last year… This one is MUCH quieter! Nothing more than your average gas burner, where the MSR (which I’m looking to sell) sounds very much like its implied rocket!

As the crowd eventually departed, I made my way up to the trig – only to find it infested by a cloud of flying ants. What had drawn them to this concrete pillar ahead of all the square hectares of gorse, I’ll never know! But I was gone again within thirty seconds!

Time to head downhill in order to complete my circuit of Wimbleball Lake. Find the right of way was straightforward, as I plummeted down toward Hartford on a path that was clear but narrowing.

One heart-pumping but short climb up the road and I would soon meet the dam above the River Haddeo. Naturally, other people are drawn to such a structure and I’d soon discover a wheelchair-friendly path that would lead me back to the car park.

I would pass a few other small groups of people on this final leg of my Lakeside Circuit. Again, I wondered why these young people were not in work, school or off to university. Had their periods of lockdown and/or furlough been sustained? Perhaps they wondered the same about me.

As I made my way back to the car, I thought of stopping off to sample the café – which has received mixed reviews on Google. But I have felt quite “savvy” since the pandemic started… Very aware and unlikely to invest in dining out (until very recently). While others seemed happy to oblige.

I’d carried the makings of my own cup of tea (and a bit extra) for most of the day and, looking ahead, I saw the opportunity of getting home before 16:00 (which is effectively Cup of Tea Time on my days off).

If you get the chance to walk around Wimbleball Lake, I’d recommend it. Be aware that it can be very busy on a weekend and it’s probably worth doing Haddon Hill at the same time, unless you happen to live next door.